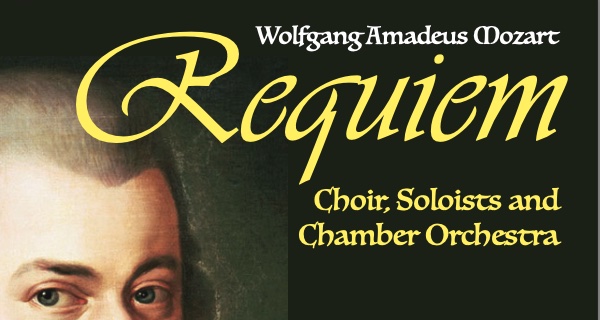 On Sunday, November 6 at 3:00 pm, as part of the “Concerts in a Country Church” the Choir of St. Colman with friends, soloists and chamber orchestra will present one of the most famous and beloved works in the entire choral repertoire: W. A. Mozart’s “Requiem”.

Concert begins at 3:00 pm and last approximately an hour and a half. Tickets are $20.00 at the door or you may visit: www. stcolmanmusic.org for more ticket information.

St. Colman Catholic Church is located at 219 South North Street in Washington Court House, Ohio 43160. There is parking by the side of the church and behind the Parish Center and on the street.

Mozart’s Requiem is a choral masterpiece shrouded in mystery…

How much of the ‘Requiem’ did Mozart actually write? He died before the piece was finished. Mozart did compose part of the ‘Requiem’ in late 1791 but it was unfinished when he died December 5, 1791. Composer Franz Xaver Suessmayr completed the unfinished ‘Requiem’ in 1792 but it cannot be shown what parts Sussmayr actually wrote. This story is fictionalized in the movie ‘Amadeus’. The movie, released in 1984, won 8 Academy Awards including Best Picture of the Year.