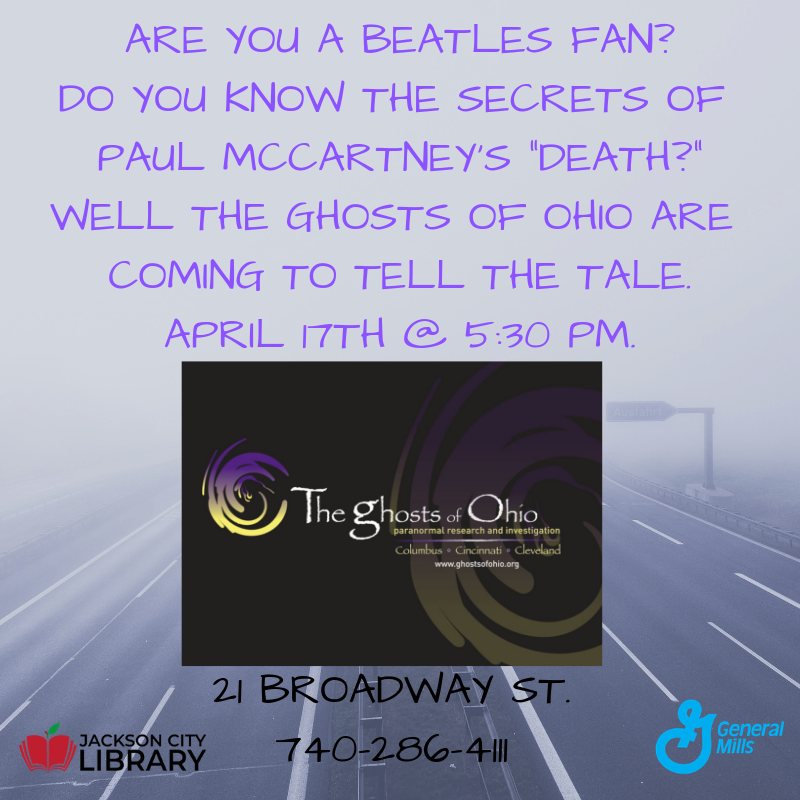 Is it true that the Beatles are actually standing over a grave on the cover of Sgt. Pepper’s Lonely Hearts Club Band?

What is John Lennon saying at the very end of Strawberry Fields Forever?

And why is Paul McCartney barefoot on the cover of Abbey Road?

All will be revealed in a special one-night only presentation,
I buried Paul: An In-Depth Examination of the Paul McCartney Death Clues.

Join author and paranormal researcher James A. Willis on a magical mystery tour, digging deep into one of the music world’s most enduring conspiracy theories: that Paul McCartney died in the 1960s and was replaced by a body double. Proof of this, the conspiracy theorists will tell you, can be found hidden away in The Beatles’ album artwork and even in their songs.

Hard to believe, to be sure. But come out to the Jackson City Library (21 Broadway Street, Jackson, OH) on Wednesday, April 17th and review the “evidence” for yourself. See the clues hidden within the album covers and artwork. Hear the audio evidence…even the ones that need to be played backwards! Take it all in and then ask yourself the question that the entire nation was asking itself back in 1969: “It he really dead?”

This presentation is free and open to the general public. Seating will be on a first-come, first-seated basis.