“Rise Of The Phoenix” Fundraiser Set For Thursday

When Hil Hackworth heard about the Nov. 16 fire that destroyed or damaged several buildings on West Union Street, including The Union Bar & Grill, he jumped into action.

“I was shocked. Completely blown away and I just felt like I had to do something,” said Hackworth, a local hip-hop artist. “So right away, I reached out to (Casa Cantina Booking Director) Josh Brown and reserved Casa for Dec. 18, the earliest date I could get. I then created a Facebook event, calling on my musician friends to help with a benefit to rebuild The Union, a place that has given myself, and countless other bands, the opportunity to perform when others wouldn’t.”

Within 24 hours, Hackworth’s event, titled “Rise of the Phoenix: A Benefit to Help Rebuild The Union, had nearly 1,000 RSVPs and several local bands offered their services. The benefit quickly expanded to other uptown venues, including Jackie O’s, The Over Hang and Tony’s.

“I decided to do something in the spirit of The Union by turning it into a multi-venue, multi-band, one-night community ‘fest.’ All the venues have been awesome and more than happy to help,” he said. 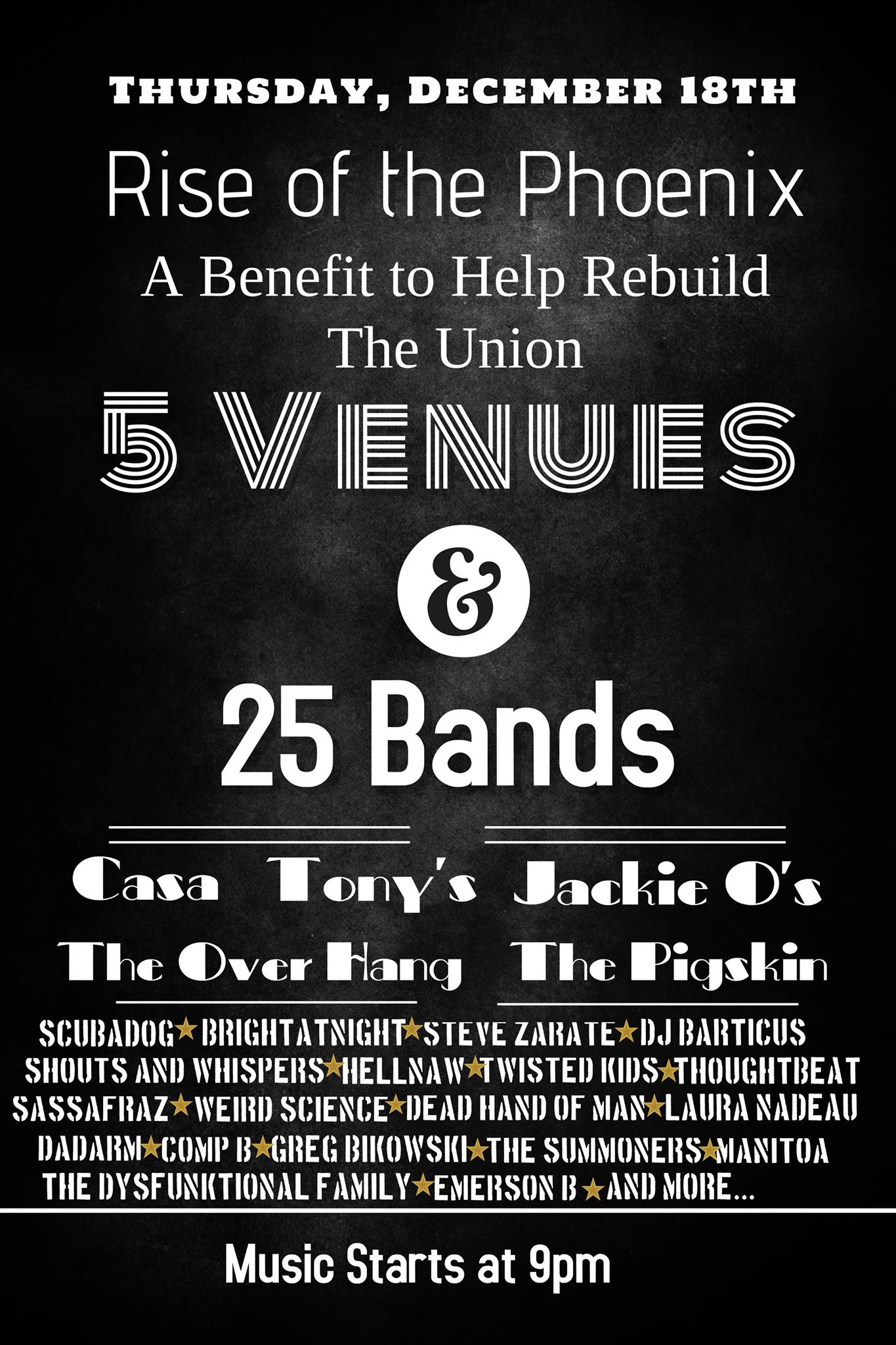 Hackworth, an Athens native, has been part of the local music community for nearly 10 years. During that time, he has tried to incorporate hip-hop into what has traditionally been a rock-centric scene. It wasn’t always easy, but he did find support at The Union.

“Back in the day, the paper used to list what musicians were performing in Athens, and what rap performances there were, separating the two. I didn’t like that and wondered why rap wasn’t considered music in Athens,” he said. “Eventually the Hip-Hop Shop started to spring up, which I now currently organize, and The Union was the first venue to offer to host it, once a month. No one else was giving it a chance, but The Union understood what we were doing and welcomed us with open arms. This benefit has been my attempt to say ‘thank you.'”

Apart from raising funds for The Union, this event is a chance for the community to show moral support for the owners and employees of the legendary watering hole and music venue.

“The Union is our family, and I want them to know that,” said Hackworth. “Really, I just want to help the place I was raised because I feel like I owe it to them. We all do.”

Thursday’s event gets underway at 9 p.m. Admission is $5 per venue or $10 for all four locations. The schedule is as follows: