The prolific multi-instrumentalist has more than a dozen solo albums, several duo releases with singer-songwriter Darrell Scott and a half-dozen with his bluegrass outfit Hot Rize, a band that he co-founded in 1978 and one that recorded and toured last year after a two-decade hiatus.

Hot Rize won the IBMA’s first Entertainer of the Year Award in 1990. O’Brien won the coveted IBMA male vocalist of the year in 1993 and a Grammy for best traditional folk album in 2005 for his solo album, Fiddler’s Green.

WOUB’s Mark Hellenberg caught up with O’Brien to discuss his musical roots, current projects and this weekend’s show.

WOUB: A few years back, you were inducted into the West Virginia Music Hall of Fame. I think Michael Lipton from the Mountain Stage band was instrumental in getting that whole thing started. I also heard you perform at the 2013 Americana Music Association convention in Nashville, honoring Larry Groce and Mountain Stage’s 30th anniversary. I know you haven’t lived in West Virginia for a while but you seem to keep up on your connections to your native state.

Tim O’Brien: I’m proud to be a native West Virginian, and while I don’t get to visit that often, I try to be a good ambassador for the state and support good things going on there. One thing I’m contributing to right now is AWARE, an artist-based environmental group. The very first release on the new Short Order Sessions label benefits AWARE, and I hope the song “Brush My Teeth With Coca-Cola” helps remind folks inside-and-out of the state to keep an eye on industry.

I’ve served as a board member of the West Virginia Music Hall of Fame since its beginnings for similar reasons–to give back to the place that gave me life and direction. Being inducted was a great honor. There’s a sort of diaspora of West Virginians who leave for more opportunity, but I and many others have hopes to make it more possible for artists and others to flourish there.

WOUB: You’re returning to the Adelphia stage this Friday. You must like playing that venue.

TO: Todd Burge, who books it, is a good friend and the venue seems to draw a nice crowd for me. And if I play there, I get to visit my home state across the river.

WOUB: Todd is great asset to the Marietta/Parkersburg music scene. He tells me that you’re back in the producer’s chair for his next recording.

TO: Todd’s new project, Imitation Life, is now mixed and mastered. He’s got a great talent as a writer and unique view of the world; he’s invented his own art form. His songs just get better and better. He’s an example of someone making his own way as an artist, and inventing his own marketplace.

WOUB: You have been in the U.K. doing another Transatlantic Session. The caliber of musicianship and the collaborations on those programs are so good. Those videos are excellent. Who was on this latest outing, and for our listeners who aren’t familiar with that series, can you give a brief explanation?

TO: There are two parts of the Transatlantic Sessions franchise. One part is the television program, which is the perfect combination of a recording session and a jam session, with video cameras running. Very intimate, fresh and real, but fairly polished too. The other part it–the live performance version, which I’m doing right now–happens annually in the U.K. We start with a couple days of rehearsals and two shows in Glasgow at the Celtic Connections festival, and then we take it on the road for another five shows in really nice venues. There are 18 musicians, three tech, two road managers and a bus driver! Celtic Connections staff produces it.

Special guests this year are: Sarah Watkins on fiddle and vocals; Dirk Powell on banjo, accordion and fiddle; Kathleen McGinnes, a fine Gaelic singer; songwriter Patty Griffin; and the venerable Rodney Crowell to round it out. It’s kind of amazing how egos are in check, everyone helps each other and contributes to a thing that just really lifts up. The TV show,which has incredibly never aired in the U.S., is slated to air on PBS this coming March with, I think, 10 episodes compiled from the past seasons’ shows.

WOUB: This project seems perfect for you, since your music has always reflected your roots and influences from both sides of the pond.

TO: I save these dates on the calendar each year because I learn so much and I get to play with such fine players of Celtic stuff. The house band are all great friends. I started working over there in the mid ’90s to do just that. Now I even make a little money doing it.

WOUB: In some regards, you seem chameleon-like–playing everything from rock and roll with Mark Knopfler, bluegrass, folk, swing, country, old time, Roger Miller tunes, Dylan tunes and original songs. But in a way, all of these styles are connected and your body of work is quite cohesive. I guess that’s why terms like roots music and Americana were invented. It all sounds like the real deal to me. Real music.

TO: Yeah, my output is pretty eclectic, but if you average it over the years it boils down to a certain roots hybrid, which is where I like to live. America’s melting pot in audio. 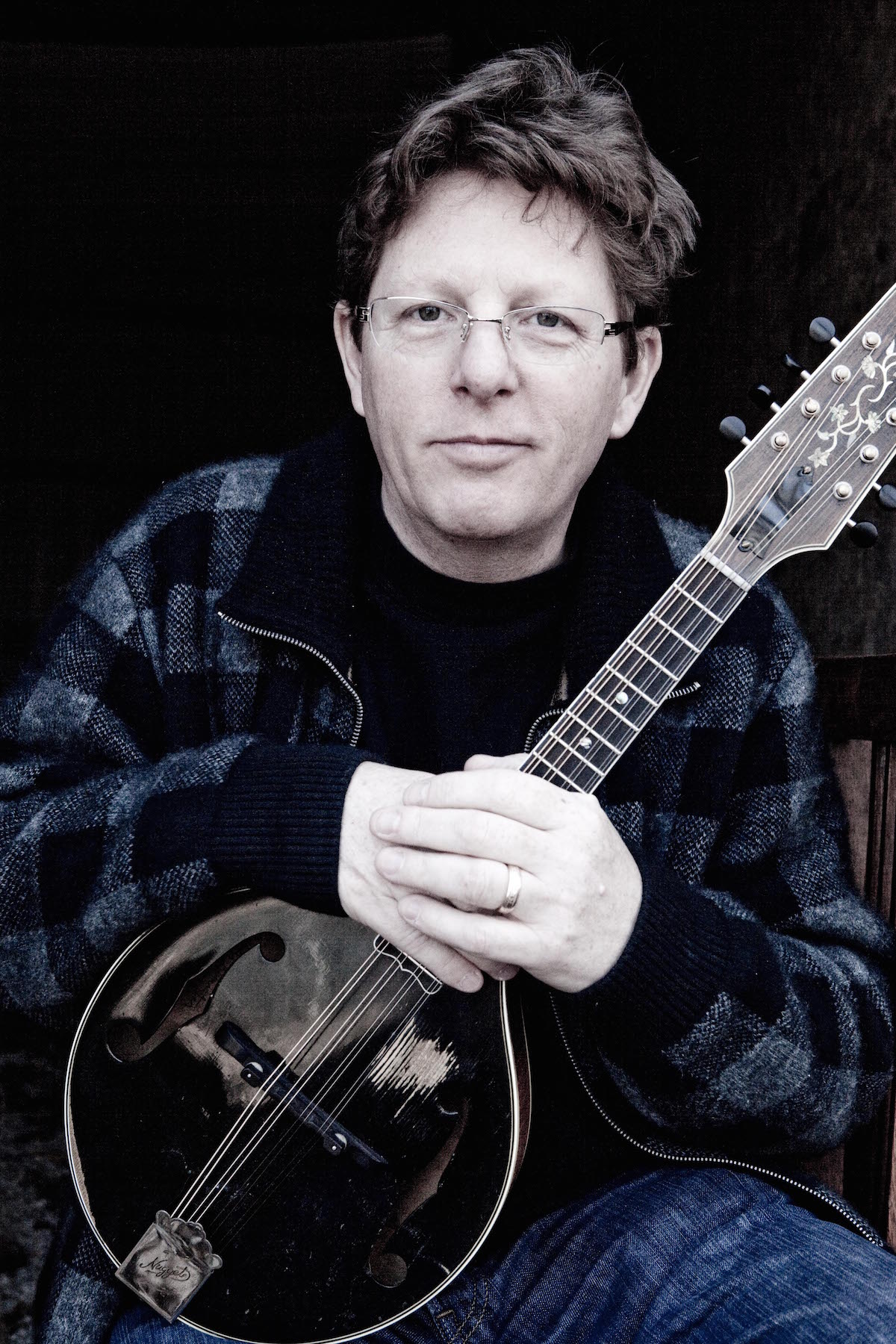 WOUB: I read on your website that you had to bow out of the Earls of Leicester tour dates (great name, by the way) because of your Hot Rize commitments. You have so many different projects going on it’s amazing that you can keep them straight. You have a handful of solo dates, the Adelphia being the first, and then you tour again with Hot Rize. What inspired you to reboot that venerable band with an album and a tour?

TO: Hot Rize refuses to go away! I went solo in 1990 but stayed in touch with the guys and played regular reunion shows. But while the love of each other maintained, it was obvious that the public needed to be reminded, and we ourselves needed new juice for the show, so we put the work into a new recording. As a result, we’re having even more fun. The reboot includes a good amount of touring over the 16 months following the release of our CD, When I’m Free. We’re dinosaurs learning about social media but it’s working. In coming years we mean to be more active, with something like 20 shows annually.

WOUB: Are Red Knuckles and the boys joining you for this one?

TO: Yes, Red Knuckles is back, too. He’s come into his money in recent years. His son Verbal patented the massively successful curved shower curtain rod and rewarded his dad with a new doublewide and financial independence, but Red still likes to play music, so they’re back out. It’s a little threatening to hear that they got booked as a headliner at the big Rocky Grass Festival in Colorado in July. I wonder if they’ll ask us to play with them there.

WOUB: Not that you need any more projects but what’s in the future? Do you have any plans for another collaboration with Darrell Scott? Any solo albums in works?

TO: Darrell’s taking a year to lie fallow, write and enjoy a tract of land on the Cumberland plateau he bought a few years back. I have a CD’s worth of stuff in the can but no time to tour it, ’cause I’m concentrating on Hot Rize. So instead of letting those tracks rot, I’m going to release it gradually over this year as singles on my new download and streaming label Short Order Sessions.

I should also mention that I’m producing Juno award-winner Old Man Luedeke in March, I’m part of Jayme Stone’s Lomax Sessions CD and tour coming in April, and I’m very excited to record with Bill Frisell next month. The project centers on Dale Bruning, a venerable jazz guitarist and teacher we both studied with. I can’t wait.

WOUB: You’ve mentioned the Short Order Sessions that you’re making available on the web. I’m intrigued. Can you elaborate?

TO: Yeah, check in at www.shortordersessions.com every few weeks and you’ll see a new track. I’m releasing two each month. Yesterday the second track came out–it’s a mandolin-driven blues by Michael Hurley called “Ditty Boy Twang,” and in two weeks you can get a banjo-ed version of James Brown’s “Get Up Offa That Thing.”

The CD may be leaving the building and the download is getting scared too, with streaming the best guess anyone has for the music business. I’ll still carry physical CDs on the road and may eventually make up some from the various Short Order Sessions tracks. Maybe some vinyl for the hardcore eventually, too. I just did a track and a video for Short Order Sessions in Glasgow of an old time tune I rewrote called “Dance, You Hippy, Dance.” The cool thing is, I can just keep recording as the mood hits and the music doesn’t need to sit in a box long. It’s liberating. I get to grab friends as we pass in the night and make a little recording for others to hear.

Tell Me Why: A Talk With Columbus’ Moon High

A Talk with Wilco’s Jeff Tweedy