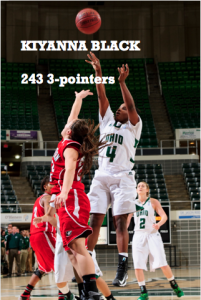 Kiyanna Black continues to leave a lasting mark in the Ohio record books.

She entered the Bobcats’ game against Western Michigan needing one 3-pointer to become the all-time leader.

Black set the Ohio Women’s Basketball team record for career 3-pointers made with two minutes left in the first quarter against Western Michigan on an assist from Yamonie Jenkins.

3-pointer no. 243 moves her past Cathy Szall. Szall played for the Bobcats from 1998 to 2002 and ranks third on Ohio’s all-time scoring list with 1,461 points. Coming into Ohio’s game against Western Michigan, Black ranks fifth in that category with 1,373 points.

This record isn’t Black’s first and may not be her last. She’s already the all-time leader in 3-pointers attempted (755 before Saturday). It’s no surprise that her senior year could bring her the most recognition. She’s currently averaging 17.5 points per game this season, and, if she continues that average, she could climb as high a no. 2 on the all-time scoring list.