The Ohio University Police Department has issued a stream of public urination citations during this year’s fests.

Ohio University Chief of Police Andrew Powers said public urination is one of the violations that can contribute to a party being classified as a nuisance party under Athens City Code.

Sections 9.14.01 through 9.14.99 of the Athens’ “Nuisance Party Law” addresses fest-related issues such as open-container and public urination violations.

The law deals with disorderly conduct, illegal open containers of alcohol, outdoor urination or defecation in a public place or on the property of another.

That allowed police to walk past confused party-goers and on to private property this weekend. 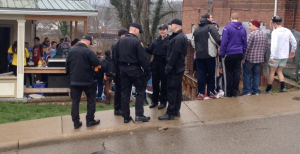 Public restrooms are scarce or non-existent at the fests, according to students. Last week, the Sigma Kappa sorority house on College Street saw $60 in damage to furniture when a man outside peed into the window.

With the end of fest-season nearing, students are suggesting ways to ease the problem.

“I think it would be smart if the campus invested in getting Port-a-Pottys for the streets or something like that so the students were able to use the restroom, because it’s not worth the $140 fine for them to get in trouble either way,” Ohio University Junior Kara Lucas said.

Thousands Turn Out For Last Spring Fest Of The Year