After driving by Coolville, Ohio, on Route 50, a driver might decide to pull off at the rest stop right before Torch. To some passing through, the junction might appear to be simply a very busy spot for truck traffic.  To residents of Torch, however, that truck traffic has a different meaning.

The K&H Partners injection well sits across the street from the rest stop. Huge, tall, green tanks stand atop a hill as receptacles–ready to accept the toxic waste water from hydraulic fracturing. The site has inspired the creation of several opposition groups, including Torch Can Do.

Felicia Mettler is a member of Torch Can Do. Felicia describes herself as a stay-at-home mom. She has never taken an interest in activism, but after learning more about the injection site and fracking in general, Felicia decided to take a stand, which she has never regretted. “I’m beyond angry, I’m scared, I’m aggravated, that our lawmakers who we have put in place to keep us healthy and keep us safe are not doing their job.” Felicia said while she stood on the road so that she would not be trespassing on K&H’s property.

So what is fracking? And what is an injection well?

According to the Ohio Department of Natural Resources,fracking is short for hydraulic fracturing. Fracking is deep drilling into the earth and releasing a high pressure water mixture. The mixture is directed at the rocks to release the gas inside. An injection well is where the toxic fracking waste water is disposed of by injecting it into the earth.

The K&H Partners has the largest injection well complex in Ohio. The recent approval of another site moved one activist group, the Athens County Fracking Action Network, to head to court. The group’s appeal of ODNR’s injection well license was rejected.

ODNR said the sites are strictly regulated for Ohioans safety. Felicia, however, disagrees. Torch Can Do thinks the state should not allow fracking or injection wells anywhere in the state.

Felicia was a part of a protest at the K&H site last summer. Torch Can Do and the Athens County Fracking Action Network peacefully protested at the injection well site. Felicia was not one of the protesters to get arrested.

“I felt like I was doing my community service. That’s how I feel. I feel like with the knowledge that I have learned. I have an obligation to share with my community what is right next door,” Felicia said about the protest.

Bernhard Debatin is a professor at Ohio University. He teaches environmental journalism and has become an advocate for environmental justice. He has studied the Ohio Revised Code regarding fracking and injection wells and is concerned.

“The reality is almost everything is not mandatory. It’s at the discretion of the oil and gas chief and that means they usually don’t do it. So if you want to have proper regulation it needs to be mandatory.” Debatin said.

An ODNR spokesperson said the department stands by its rules governing injection wells in Ohio and believes it is on the right track within the tenets of the law.

According to the Columbus Dispatch, the injection well in Torch took in more than four million barrels of fracking waste water last year. That is an increase of a million barrels, or nearly 40 percent in a year. 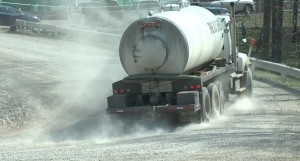 In 2014, a majority of Athens residents voted to ban injection wells in the county. The Ohio Supreme Court, however, ruled the ban unconstitutional. The Supreme Court said “municipalities cannot discriminate against, unfairly impede, or obstruct oil and gas activities and operations that the state has permitted.

However, the ruling did not stop people like Felicia Mettler from continuing to protest. She believes they can still to come together and make their voices heard.

“The more voices we have the more we will get done. The people have so much power if they would stand up and unite. Unity is key to get anything done,” she said.

K&H Partners was repeatedly contact for a response to this story, but did not return phone calls or emails.