A dominating pitching performance from starter Chase Whitlatch notched the victory for the undefeated Meigs Marauders against the struggling Athens Bulldogs Monday night.

The junior was unhittable all night, going from start to finish for the complete game shutout. The Bulldogs, which had scored 41 runs in their previous three games, were held to just four hits, with Whitlatch striking out 10 batters on the night.

“You pretty much know what he is going to throw,” Athens Head Coach Chris Stewart said of Whitlatch. “He just says if you can beat me, you can beat me – and today he beat us.”

In addition to pitching, the Meigs offense was able to break the game open thanks to a long drive double from first basemen Alec Bissell that rolled all the way to the wall.  That shot drove in two Meigs runs and was a key play in a game that remained 2-0 until the fifth inning. 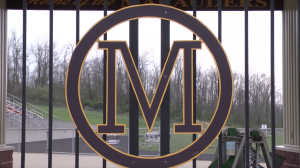 In the bottom of the fifth the Marauders were able to break the game open thanks to three straight doubles including a rocket from Whitlatch that drive in two runs.  The Marauders recorded 12 hits including 5 doubles on the night.

Coach Stewart says his team does not have time to dwell on the tough defeat that brought the Bulldogs record to 3-5.

“We have a motto; if something happens that goes against us we say: ‘So what, next pitch,’” he said. “You have to think about the next pitch and the next day.”

Athens will have a chance to take that next pitch when they face the 4-1 Wellston Rockets at home on Wednesday April 6th.

Marauders Undefeated with Win Over Athens