New technology may help in finding a serial sexual predator.

A new image of the man believed to have been attacking women for more than nine years was released Wednesday by the Athens Police Department.

The near photo-like rendering was created by “Snapshot DNA” at the request of the Athens Police Department.  The process is called phenotyping, which uses DNA evidence to create a what is thought to be a more accurate image of a suspect. 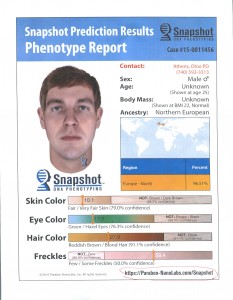 Police Chief Tom Pyle said this is new ground for his department.

“This is absolutely the first time it’s been done in Athens,” he said. “And I heard a rumor this is the first time the state has used this as well. “

The ongoing investigation, which began in January, has seen the number of tips taper off in recent weeks.  It’s hoped the release of this new profile and picture will change that.

“I think [victims] are hopeful that this will assist in bringing this case to a close,” said Lt. Jeff McCall, detective with the APD.

The cases were reported to have occurred on June 11, 2006, June 20, 2015, and December 12, 2015. Each of the attacks occurred under similar circumstances, when the female victims were walking home alone late at night or in the early morning.

“I trust that Athens is really safe, ” she said. “I’ve never felt uncomfortable here, and I know that the police department has stations very central to campus and where I live – I also feel like they always do a good job staying very transparent so we know what’s happening.”

Athens Mayor Steve Patterson has a message for the sexual predator.

“Turn yourself in and know that the police department has been instructed to pull out the stops and use every resource available, every agency available,” he said. “I think this phenotyping report is one more step in that direction to show we will take whatever steps necessary to find this person – and we will.”

Anyone with information about the attacker is encouraged to call (740)566-4208 from 8 a.m. to 4 p.m. To directly provide information to a police officer or detective call (740) 592-3313. Information can also be provided to the department’s crime tip page.