The annual international street fair was in full swing Saturday morning as representatives of 113 world cultures lined Court and Union Streets, marking the end of International week at Ohio University.

The street fair offered food, music and performances to attendees from 10 a.m. to 5 p.m.

Each stand exposed guests to their respective cultures. Food and entertainment drew people in, but the two most important aspects of the fair were increasing cultural awareness while bringing people together. 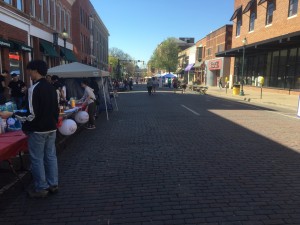 “At the end of this International Week, let us commit; let us reunite,” said Ohio University President Roderick McDavis. “Let us talk about what happens when the world comes together. Let us focus on being one, not divided. That’s who we are. We are one.”

“I think this is what’s great about Athens, the diversity,” Alshehri said. “Most people don’t know about the Middle East and Saudi Arabia so I think this is a great chance for everyone to come together and learn about the cultures and each individual.”

“I think it’s really important cause it definitely clears up a lot of stereotypes I think, it just encourages people to be more curious,” said Japanese Student Organization member Zanna Jansen. “If you see people that aren’t white, you don’t want to make assumptions. You want to make sure you actually know their culture and respect that.”

“The most important thing is to communicate with people and spread our culture,” Chinese Student Organization member Jing Fu said. “The fair lets us express ourselves to show our own culture and show confidence in our people, which always something that is really great.”

Foods at the street fair ranged from teriyaki-grilled corn at the Japanese Student Organization’s table, to dates and traditional Saudi Arabian coffee.

Traditional dances and musical performances were showcased on stage throughout the festival.