The Gathering Place, a place of support for adults coping with mental illness, celebrates it’s 40th anniversary next Thursday. The celebration includes an open house and art show to exhibit and sell members’ work.

The Gathering Place hosts 20-30 “members” each day battling a range of mental illnesses such as anxiety, depression, bipolar disorder, schizophrenia, PTSD, and ADHD. To become a member, applicants must be under the care of a counselor, be voted into the fold by other members and pay a $5 annual fee. 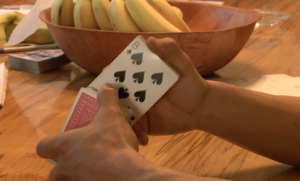 “They come to the Gathering Place for peer-to-peer support, meaningful activity, a sense of ownership, and empowerment,” Program Manager Brittany Silverman said. “We have music therapy, poetry, fitness … we have Euchre tournaments, we play cornhole, lots of rummy, lots of boardgames. We also have meals four days a week,” she said.

The Gathering Place itself is supported by a group of volunteers who listen to members, help them with their electronics, and play games with them.

“I came in and sat down with a member one day and we talked for a few hours and I didn’t realize my time was up because we were just having a good time,” Jennie Card, a junior at Ohio University said. Card began volunteering at the Gathering Place as a part of her social work class but returned even after finishing her hours. “It’s awesome and really good experience for me for after college,” Card said. 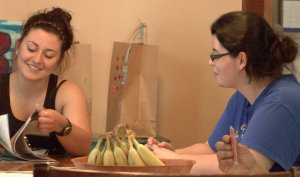 Other students helping out at the Gathering Place include trained volunteers, drop in volunteers, and those in need of community service hours.

Renovations have just been completed to the Congress Street house, the home of the Gathering Place.  Those  renovations included adding a space for music and art to make the place more welcoming.

Geoff Simon, a member of the Gathering Place, said what happens at the facility needs to be personally experienced to avoid misconceptions.

“There is a positive outcome from being a part of the community here without a doubt,” Simon said. “Usually those looking to change, or better, or advance the position of their current life or struggles, or conditions, needs an environment to take them out of the environment that is putting into them into the circle or loop that they were in and want out.” 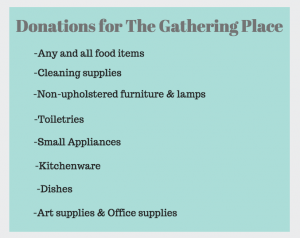 Silverman is hopeful that the open house will bring more donations to the Gathering Place.

“We usually send out community service kids out to the general area to go door to door to collect donations,” she said.

She says these ‘peanut butter & jelly’ drives, are especially fruitful at the end of Ohio University’s academic year when students move out and want to get rid of their unused and unopened groceries.

The Gathering Place to Celebrate 40 Years in the Athens Community

World Record Attempt To Be Made By The Gathering Place