Winning Bobcats Hope for Even More in Jesse Owens Classic 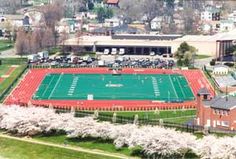 The Ohio Track and Field team continues to find its winning formula during the 2016 season.

The Bobcats have dominated over the past two weeks finishing 1st in the All-Ohio Championships and having three athletes win their individual events in the Charlotte Invitational. Despite the success, they’re approaching the Jesse Owens Classic this weekend with one goal in mind: Get better.

“We’ve gone out there every meet and given it our all and we’ve been giving it 110 percent at practice and it’s showing,” said Tajah Smith, a junior sprinter on the team. “I think people are PRing every week. Someone has set a personal best or personal record and that’s just awesome.”

Smith got first place points at the All-Ohio Championships clocking in with her relay at 49.47 seconds. At the Charlotte Invitational the following week, the team clocked in at 48.46 – an improvement of more than a second.

She has not, however, reached her goals in individual events. Her personal best in the 100m dash is an 11.9, but in her last event, she finished at 13.22.

Smith shares the same goal as many of her teammates, including 5th year senior Chanda Cuckler. Cuckler competes in six events, including the javelin, high jump and hurdles, however like Smith, all she wants to do is grow.

“The goal is to place higher and higher in every MAC meet,” Cuckler said. “This year we are improving a lot.”

The Bobcats look to keep improving as the competition gets tougher. At the meet this weekend, opponents from the Big 10 and the SEC, conferences known for dominating on the track, will be competing. Being dominant at the Jesse Owens Classic will get the Bobcats one step closer to their winning formula.