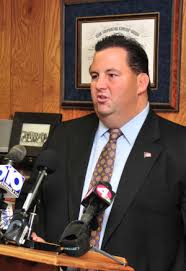 Brooks Jarosz, investigative reporter for ABC 6 in Columbus, investigated Blackburn’s use of the Furtherance of Justice fund, which is used by prosecutors and sheriffs in Ohio for criminal investigation and training uses.

Jarosz found that Blackburn spent $90 on a steak dinner during a conference in Orlando, and more than $1,000 in registration for a San Diego career course, for which the Ohio Supreme Court showed no records of continuing education credits.

Blackburn told the Jarosz that he’s proud of his office “because we’re taking care of a major problem with oxycodone and heroin” and said the dinners were part of “the travel plan.”

When ABC 6 asked to discuss the funds with Auditor of State Dave Yost, they gave a statement saying it is “normal practice for us to review issues that are raised by the public or media.”

Athens County Auditor Jill Thompson is quoted by the media outlet calling the spending “self-serving” and saying she wants to see internal controls when it comes to prosecutor and sheriff spending accounts.

Auditor Looks to Call Out Spending Abuse by Public Officials

Sheriff Seeks Explanation On Prosecutor’s Opinion Regarding Use Of Funds