This Sunday, Feb. 12, the Ariel Opera House in Gallipolis, OH will offer a free event to the public, entitled “The Story of John Gee, Hero of Gallipolis.”

At 2 p.m., attendees will be presented the opportunity to learn about one of Ohio history’s silent heroes. During his lifetime, Gee arose to a status of success and influence unheard of for an African-American in the United States. His name is virtually unknown, his accomplishments unrecognized, and his deeds unacknowledged in the pages of American history. Gee was a man who did not simply overcome the barriers imposed upon African Americans: he shattered them, making his absence in American, Ohioan, and even African American history a source of frustration to those aware of his feats.

For several years now, The Ariel and its director Lora Lynn Snow have made successful efforts to engage the public in Black History Month. In 2016 the opera house offered a presentation on Dr. Edward Bouchet, the first African-America to obtain a Ph.D.

For this year’s event, Gee was selected after Snow stumbled upon his tale while working the notable restorations and repairs that have rebirthed the location since Snow took control over two decades ago. Property records enabled her to put together some pieces of the puzzle, and after difficult research (very little information on Gee can be found, even online) she and others pieced together the fascinating account of Gee’s life.

Born a free man in Cincinnati, Gee moved to Gallipolis between 1818 and 1822. During his time there he would become the largest property owner in town, manage a successful business, help build sidewalks over the dirt roads of the city, and serve as an active church member and philanthropist. Behind closed doors, he helped slaves escape through the Underground Railroad, and took a revolutionary stance on topics such as African American voting rights for males as well as slaves marked as fugitives.

“The amazing thing about this man I think first of all is that he managed to be very successful as a black man during the time of slavery,” said Snow of his impressive successes. “The hurdles were huge. He was industrious, he was resourceful, he was obviously a good communicator or else he wouldn’t have been as successful. He owned property starting at the Ohio River which at that time was owned by Virginia, a slave state.”

While Ohio was a member of the Union and a free state, life was anything but easy or equal for African Americans. In 2016, several news sources including NPR published the story of retired professor Al Bright, a Youngstown, OH native who recalled the hurdles he faced as an African American. In 1951, Bright arrived to a local swimming pool with his fellow baseball teammates after hitting a winning home run. Bright was first barred access from the pool altogether, then was eventually allowed into the water under condition he did not physically touch it, or share the space of the pool with Caucasian citizens.

This event took place over a century after Gee’s move to Gallipolis, several hours to the north. Youngstown is located just under five hours from Toronto, where those of African descent had been operating businesses for decades. The incident offers a perspective for just how incredible Gee’s own feats were.

In addition to his work with the Underground Railroad, Gee’s second wife hailed from the slave state of Kentucky, posing many questions of how she reached freedom, and whether Gee’s influence played a role.

“He had a large family, big business,” said Snow. “Successful with his church and still risked all that to be a conductor of the Underground Railroad. It was a very dangerous thing. Can you imagine what they would have done to someone had they caught him? What would they have done to his family? He was risking all of that rescuing God knows how many people.”

The heroic tale of Gee’s seemingly forgotten life will be accompanied by the Ohio Valley Symphony Woodwind Quintet, a first for The Ariel’s Black History Month presentations. The quintet will accompany the narrations of presenter and historian Elaine Armstrong with spiritual pieces reminiscent of an earlier time. 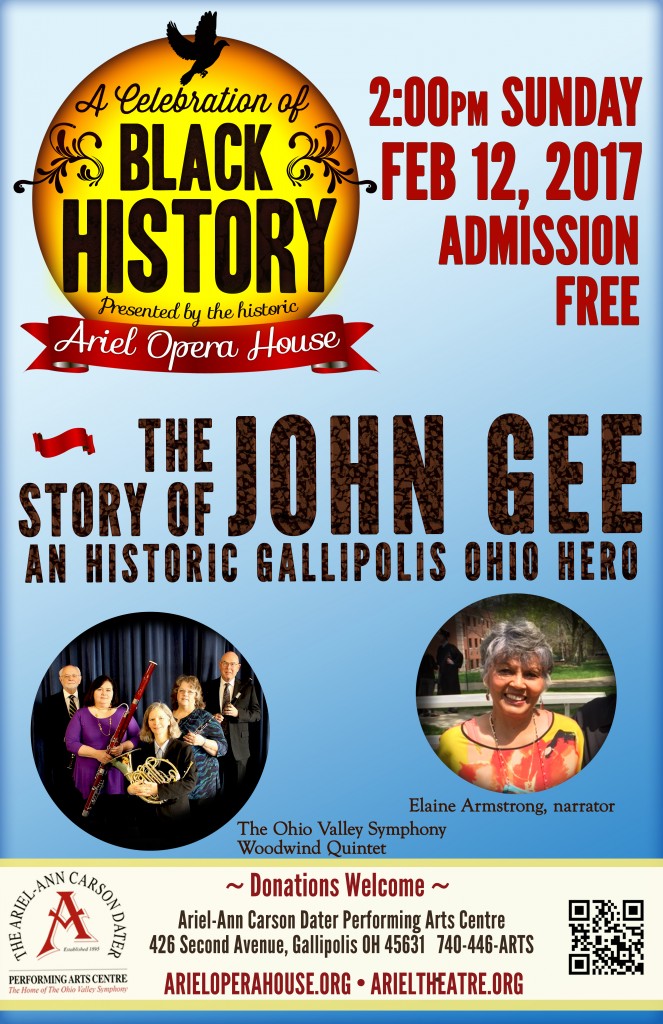