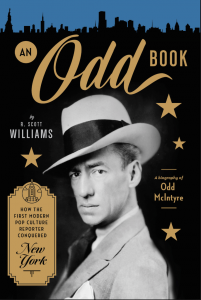 That Saturday marks yet another visit to the little town on the banks of the Ohio River by writer R. Scott Williams, who will be signing copies of his most recent work A Odd Book: How the First Modern Pop Culture Reporter Conquered New York, in conjunction with an exciting performance later in the evening by Philip Armstrong and the Ohio Valley Symphony.

Williams has been making his way from the east coast to Gallipolis for the past several years in researching the book, which documents the life of Odd McIntyre, a Gallipolis native and one of the first writers to engage in modern arts and culture commentary.

“I had been writing a book about Richard Halliburton, an explorer and writer from my hometown in Tennessee, when I first came across some comments that Odd had made about Halliburton in my research,” said Williams. “I really liked the way that (McIntyre) wrote, and the personality that came out of it. So when I was finished with the book on Halliburton, I started to look into whether anyone else had written about Odd.”

As it turns out, no one really had.

Williams did a bit more digging, and determined that there certainly was a story around Odd that would be worth telling.

McIntyre spent most of his adult life in New York City, documenting the arts, sports, and life in general for a number of publications, as well in his daily, nationally beloved column, New York Day By Day, which was read by millions of people on a regular basis. McIntyre was one of the highest paid writers of his day, making as much as $200,000 a year.

McIntyre worked extensively for newspapers after dropping out of high school, and it was there that he learned the incredible reverence that the public has for seeing their own names in print.

“While in Gallipolis – and particularly at the Ariel Opera House – (McIntyre) observed what it was like for a person on stage to be adored by people in the audience. As a reporter, whenever he would write about someone going to Cincinnati or getting new bushes, he would see people responding to those columns in such a way that really made him understand the value people have for fame, and what it means for people to see their name in print,” said Williams.

McIntyre and his wife, Mabel, moved to New York during a time of seismic cultural change all around the country. Vaudeville was being replaced by moving pictures, which were being slowly replaced by talkies – not to mention that the country was experiencing an economic and technological boom.

“He had a really interesting view of the era that he was in. He also wrote in such a way that everyday people could understand what he was writing about,” said Williams. “He positioned himself in such a way that he could still understand the excitement that people felt when they saw a celebrity in real life – when they saw Charlie Chaplin walking down the street. In the ways that he observed New York and Hollywood, he managed to still never get jaded.”

The seed for the April 22 event at the Ariel was planted over 25 years ago, when Ariel executive director Lora Lynn Snow began to work on finding the sheet music for Meredith Willson’s (of Music Man fame,) 1935 O.O. McIntyre Suite.

“(Odd McIntyre) positioned himself in such a way that he could still understand the excitement that people felt when they saw a celebrity in real life – when they saw Charlie Chaplin walking down the street. In the ways that he observed New York and Hollywood, he managed to still never get jaded,” – R. Scott Williams

After much searching, Snow did find the music for the suite. Snow decided to bring back Gallia County-raised tenor vocalist Phillip Armstrong (to add a certain element of, as McIntyre would say, “hometown boy makes good” to the event,) to perform as a guest artist with The Ohio Valley Symphony, who will put on the work, as well as a number of other tunes.

Williams will sign copies of his book and talk about McIntyre at the Ariel Opera House, 426 Second Avenue in Gallipolis, OH, at 4:30 p.m. on April 22. The Ohio Valley Symphony will perform alongside Phillip Armstrong at 7:30 p.m. Tickets for the performance are available through this link.

The Magic of Carl Michael Headed to Gallipolis