Athens, Ohio offers a unique local food experience that brings a new meaning to the term “locavore.” Each dish brought out to the table has a different story, a different history. The origin of each bite is easily traceable within a 30-mile radius.

The steps are as follows: from local farm, to kitchen, to plate, to fork, to delighted customer. That is the simplified mission of the 30 Mile Meal initiative. The project’s purpose is to support Southeast Ohio local businesses by increasing market opportunities for farmers, food producers and local food businesses. Through the camaraderie of the Athens community the 30 Mile Meal grew to be immensely successful.

Paige Alost is one of the founders of the Athens 30 Mile Meal. She is currently the executive director of the Athens County Visitors Bureau. She knows the success of Athens’ local food initiative didn’t happen over night.

“We began to formulate an idea of how we could brand and promote our idea of a local foods economy here. It really takes a strong commitment, but what we know is that the commitment really kind of branded and solidified our place in the local foods economy,” said Alost.

The 30 Mile Meal program has more than 30 restaurant, market and winery partners. One partner, Jackie O’s Pub and Brewery, is always on the mission to tantalize taste buds. The foundation of Jackie O’s came from cooking and brewing beer with locally produced products.  After using locally grown barley and hops to brew its craft beer, the used grains go back into the local food chain.

“We get the grains, we give it to the farmers, the farmers feed the cows and then the cows, when it’s processed, we get the meat. And then we cook it and we serve it,” said Luar Romero, kitchen manager of Jackie O’s.

Jackie O’s is rare. It’s a restaurant and a nationally known craft brewery, but it’s also an organic farm. Jackie O’s began growing it’s own resources in 2010 at the Barrel Ridge Farm, to make the restaurant “farm to table, Jackie O’s style.” The farm contains four greenhouses with a large selection of vegetables, and the grain grown for the beer and bread. With it’s own farm Jackie O’s found a creative way to strengthen the teamwork in the Athens community.

“When we started working with Athens Own, he’s the one that started giving us the burgers, and he’s also involved with the farmers that deal with the cows. He realized that the cows can use that grain as food,” Romero said. “… we’ve been doing that since 2006, give our grains to [the cows]. Because we started growing and brewing more there was too much [grain] we were growing … we were trying to utilize the produce as much as we can. On top of that we got another farmer that is RL Valley Ranch. They also have cows we buy meat from them and they also use our grains in that process.” 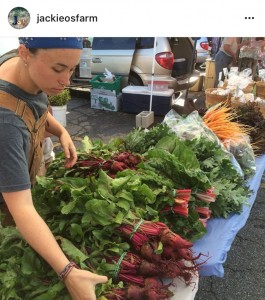 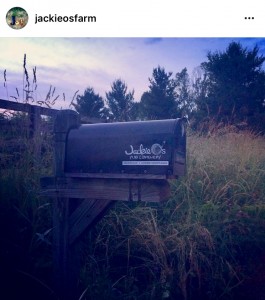 Walking through the Jackie O’s kitchen is a whirlwind of local food flavors. The chicken comes from Chestnut Farms. The fresh, rainbows of produce come from Barrel Ridge Farm and Shade Organic Farm. Integration Acres and Laurel Valley Cheese supply the many creamy and crumbly cheeses.

After graduating from Ohio University Chris Chmiel founded Integration Acres. He bought his first goat in the late 1990s, and in 2007 became a licensed farmstead cheese operator. Today more than 60 goats graze his farm and give Integration Acres the ability to sell to big names like Jackie O’s.

“[We supply] the feta cheese [at Jackie O’s] it’s on the Oestrike pizza,” said Chmiel. “They also have a salad dressing they make specials with [the feta]. They have a salad that has our chèvre on it. They have a burger that has a lot of times our blue cheese.” 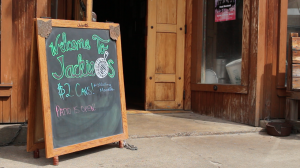 For Jackie O’s and a majority of the other 30 Mile Meal partners collaboration is the name of the game. The partnership between local restaurants and farms goes deeper than simply buying and supplying ingredients. When and what farmers chose to grow comes down to an understanding of which products are most desirable.

“The locals are very adaptable,” said Romero. “We understand each other in that matter, and we also understand what the limitations are for things to be grown in this area. Based on that we kind of adapt to that limitation [together].” 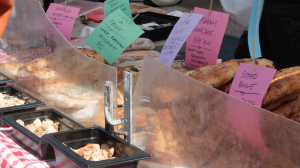 The 30 Mile Meal has proven to be an economic and social success for Athens County. The local, eclectic food and spirits in Athens attracts foodies to the small Appalachian town, and Romero knows just what will hit the spot.

“Wow … I would say the cheeseburger is number one. Then the cheese curds, for sure. The cheese comes from Laurel Valley Cheese. The pizzas are very popular. And the fish and chips, believe it or not, is always kind of hitting that mark as well.”

Farmers The Focus Of Start Of 30 Mile Meal Month