Punk rock and metal might be two of the most diverse popular genres of music – from Norwegian black metal to crust punk to speed metal to grindcore to neoclassical metal, you’re not going to find a much wider array of sounds and accompanying social scenes in almost any other musical subcultures.

August 11 and 12, Casa Nueva will play host to the very first Athens Punk and Metal Fest, organized by Casa’s very own “Metal” Mike Lannan. Lannan said that the seeds for the festival were planted while working with Casa’s booking coordinator, Josh Brown.

“We had a couple of dates open up – a whole weekend, really, and we decided to just go for it,” said Lannan, who has been in a number of regional bands – most recently Death to the State. “I know a lot of kids who play in bands in the area, and if this goes well, I’d love to make this a yearly thing.”

Lannan has quite the hodgepodge of various punk and metal acts slated to play throughout the event.

Opening up on Friday, August 11 will be Lannan’s band, Death to the State, followed by longtime Athens-area self described “creep rockers” The Revulvas. Next up will be dark hardcore Clevelanders F.Y.P.M. (an acronym for the always useful statement “F*ck You Pay Me,”) and death metal breakdown masters Warn the Others.

Saturday night will open up with T.F.U. (The F*ck Ups), a couple of “barely 21” fellows from the Athens County/Nelsonville region who will entertain with their unique brand of comedy intertwined with punk metal. Salem Hollow, Cursed Path, and the relentlessly hard Rader are also all slated to perform the second night of the festival.

“We’re going to be moving along pretty quickly each night,” said Lannan, who explained that the shows will start at 10 p.m. each night in order to not disturb people coming into Casa for hippie-dippy Mexican fare. “Not that families can’t rock out! It’s just that loud music isn’t always what people want while they’re eating dinner.” 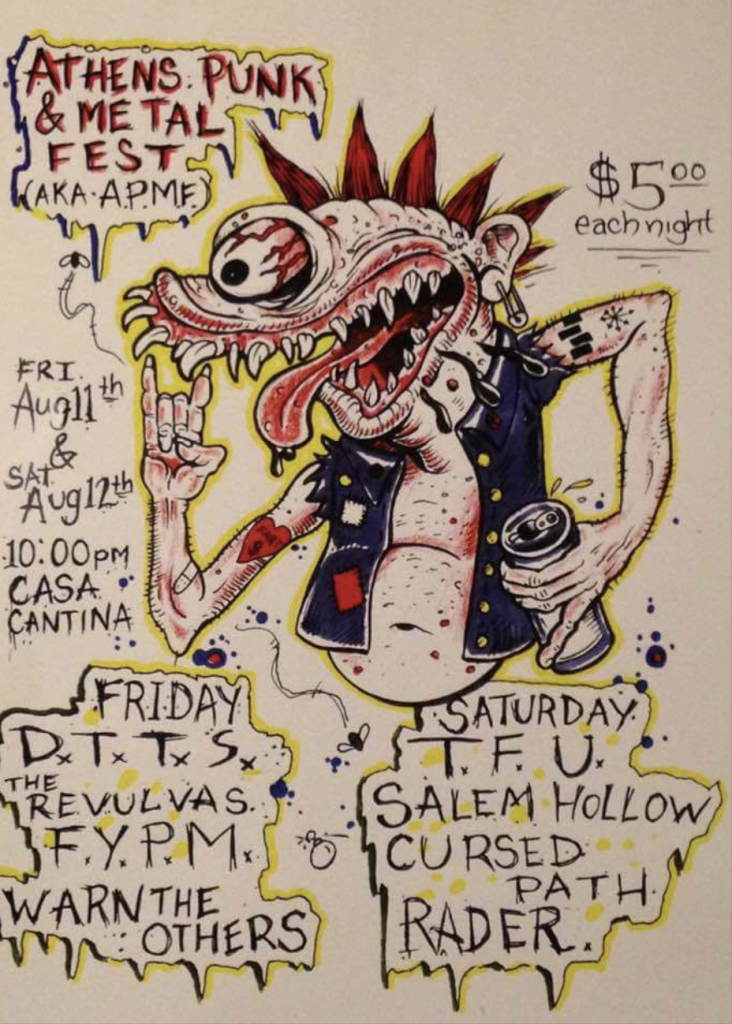