PBS and Time Inc. Present BEYOND A YEAR IN SPACE, November 15

The Follow Up to Emmy® Award-Winning Film
A YEAR IN SPACE
Premieres Wednesday, November 15, 2017

Scott Kelly Adjusts to Life on Earth After Record-Breaking Mission, as the Next Generation of Astronauts Prepares for Deep Space Travel

ARLINGTON, VA – BEYOND A YEAR IN SPACE, the follow up to Emmy® Award-winning film A YEAR IN SPACE, chronicles astronaut Scott Kelly’s return and adjustment to life on Earth after spending 12 months on the International Space Station (ISS), the longest space mission in American history. Exploring the effects of long-term space travel on the human body, the film also introduces the next generation of astronauts currently training to leave Earth’s orbit and travel into deep space. BEYOND A YEAR IN SPACE, which picks up the story with Scott Kelly’s last day in space and return to Earth, premieres Wednesday, November 15, 2017, 9:00-10:00 p.m.on WOUB. It will be preceded by an encore broadcast of A YEAR IN SPACE at 8:00 p.m. and followed by an encore broadcast of THE FARTHEST: VOYAGER IN SPACE at 10:00 p.m.

BEYOND A YEAR IN SPACE follows Kelly’s homecoming and long-awaited reunion with his family in Texas after his record-breaking stay in space with Russian cosmonaut Mikhail Kornienko. The film also tracks the extensive medical testing undergone by Scott and his brother and fellow astronaut, Mark Kelly. As identical twins, the brothers presented NASA with the extraordinary opportunity of conducting experiments on two individuals who have the same genetic makeup but spent the year in vastly different environments. The data from the twins study will help NASA determine what it will take for humans to endure long-duration space travel in preparation for a mission to Mars, an unprecedented three-year journey. 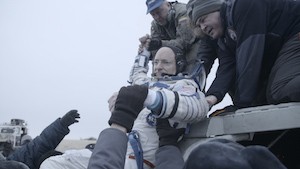 Although Scott maintained a rigorous exercise program in space, the physical toll of the voyage is evident upon his return as he suffers from sore muscles, stiff joints, flu-like symptoms, skin sensitivity and inflammation. “Gravity definitely gives you a beat down when you get back,” he said. “My feet still bother me some — I didn’t walk on them for a year!”

BEYOND A YEAR IN SPACE introduces two new astronauts preparing to venture farther than humankind has ever gone: biologist Jessica Meir and former Navy pilot Victor Glover, and provides a behind-the-scenes look at how they are training to go the distance. While first-generation astronauts were mostly “top guns” chosen for their experience in flying untested vehicles, the new generation is a diverse team with a wide variety of backgrounds and skill sets. The film follows Meir and Glover at NASA and at home, exploring their lives as astronauts and as individuals as each expresses what it means to carry on the legacy of the astronauts who came before them.

“When I was backing away from that space station I was reflecting on the fact that we built this space station in low-Earth orbit,” said Kelly. “It’s the size of a football field — a million pounds. I think it’s the hardest thing people have ever done. I feel very strongly that if we can do this, we can do anything. As future explorers, I would say if we decide we want to go to Mars, we can go to Mars.”

Featuring TIME’s Jeffrey Kluger, science journalist Miles O’Brien, NASA scientists, engineers and doctors, and a special appearance by Apollo 13 astronaut Jim Lovell, BEYOND A YEAR IN SPACE provides historical background on space exploration and connects the experiences of the earliest astronauts on manned space flights to those paving the way for the future of space exploration today.

TIME, owned by Time Inc., created A YEAR IN SPACE in 2015 as a yearlong, 12-part digital video series, produced by TIME’s supervising producer Jonathan Woods and directed by Shaul Schwarz. The episodes can be found here.  BEYOND A YEAR IN SPACE is produced by TIME’S Red Border Films for PBS in association with Reel Peak Films and Room 608. © 2017 TIME’S Red Border Films and PBS. All Rights Reserved. 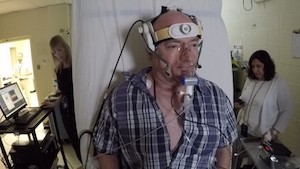 The A YEAR IN SPACE website on pbs.org features a suite of exclusive short-form videos detailing aspects of life on the International Space Station, as well as photos and videos shot during the mission. Visitors can also explore biographies and learn more about the Twin Study. Conversation about #YearInSpace on social media is reflected through a social hub on the site. Users also have the opportunity to view PBS archival materials about space exploration. Upcoming conversations about this special can be found using #BeyondYearinSpacePBS.

BEYOND A YEAR IN SPACE will be available to stream the morning after broadcast on all station-branded PBS platforms, including PBS.org and PBS apps for iOS, Android, Roku, Apple TV, Amazon Fire TV and Chromecast.

Continue your space exploration with additional new PBS specials that offer an in-depth look at the solar system and beyond. THE FARTHEST – VOYAGER IN SPACE is a two-hour special about NASA’s historic Voyager mission to explore our solar system and beyond, rebroadcasting November 15 at 10:00 p.m. ET. NOVA special “Black Hole Apocalypse,” airing on January 10, 2018, explores the Cassini space probe’s mission to Saturn and the frontiers of black hole research, respectively.  PBS KIDS’ hit space-themed series READY JET GO! takes young viewers on far-flung learning adventures through astronomy, technology, scientific exploration, innovation and invention. PBS Digital Studios’ SPACE TIME explores the outer reaches of space, the craziness of astrophysics, the possibilities of sci-fi and anything else imaginable beyond planet Earth.

Victor J. Glover, Jr. was selected as an astronaut in 2013. The California native holds a Bachelor of Science in General Engineering, a Master of Science in Flight Test Engineering, a Master of Science in Systems Engineering and a Master of Military Operational Art and Science. Glover is a naval aviator and was a test pilot in the F/A-18 Hornet, Super Hornet and EA-18G Growler. He and his family have been stationed in many locations in the United States and Japan, and he has deployed in combat and peacetime. Glover is now qualified for future assignment and working in the Exploration branch of the Astronaut Office.

Scott Kelly is a former military fighter pilot and test pilot, an engineer, retired astronaut and a retired U.S. Navy captain. A veteran of four space flights, Kelly commanded the International Space Station (ISS) on three expeditions and was a member of the yearlong mission to the ISS. In October 2015, he set the record for the total accumulated number of days spent in space, the single longest space mission by an American astronaut. A native of Orange, New Jersey, he now lives in Houston, Texas. His memoir, Endurance: A Year in Space, A Lifetime of Discovery, will be published by Knopf on October 17, 2017.

Jessica U. Meir was selected by NASA in 2013. She holds a Bachelor of Arts in Biology from Brown University, a Master of Science in Space Studies from the International Space University and a Doctorate in Marine Biology from Scripps Institution of Oceanography (UCSD).In her research, the Caribou, Maine, native studied the physiology of animals in extreme environments. From 2000 to 2003, Dr. Meir worked for Lockheed Martin’s Human Research Facility, supporting human physiology research. During this time, she also participated in research flights on NASA’s reduced gravity aircraft and served as an aquanaut in an underwater habitat for NASA Extreme Environment Mission Operations (NEEMO). Dr. Meir was selected in June 2013 as one of eight members of the 21st NASA astronaut class. Her astronaut candidate training included scientific and technical briefings, intensive instruction in International Space Station systems, spacewalks, robotics, physiological training, T38 flight training, and water and wilderness survival training. She completed astronaut candidate training in July 2015, and is now qualified for future assignment.