The Blue Devils got on the board first and never slowed down as they didn’t trail a single time during the game. 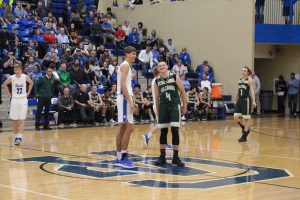 g and held the Bulldogs to only seven points.

This was a trend for the Blue Devils defense as they held Athens to under 10 points in three out of four quarters and extended their lead in each of them.

The Blue Devils took a 29-15 lead into halftime and the third quarter was when both teams really turned things up.

The Bulldogs had their most successful quarter of the night and were given numerous opportunities at the foul line but that proved to be their achilles heel as they couldn’t consistently convert. 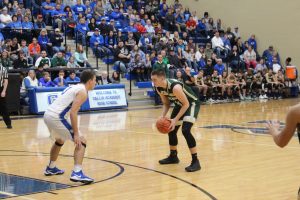 Zach Loveday flexed his defensive muscles as he had four of his nine blocks in the third quarter and didn’t slow down offensively either as he threw down an alley-oop over two Athens defenders.

The 7’0 Loveday proved to be the star of the night as he finished with 24 points, 7 rebounds, and 9 blocks.

Next up, Gailla Academy will welcome the Meigs Marauders on Dec. 5 and Athens will travel to Bishop Watterson to face off with the Eagles on Dec. 2.