Bucher was born with Spinal Muscular Atrophy (SMA), a rare neuromuscular disorder that causes the loss of motor neurons and muscle wasting. SMA can often cause early death. Although Adyn has survived, she still struggles with the realities of being born with the disease.

According to Together with SMA, those with SMA and their families become proficient in SMA home-health care. Families like the Bucher’s have grown to master difficult medical equipment to create an SMA welcoming environment. 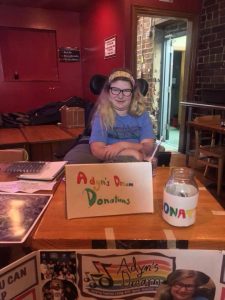 Brian, Adyn’s father, and Adyn created a way she can channel her passion for music and her understanding of the disease for a good cause. This lead to the development of Adyn’s Dream.

“Adyn’s Dream is a nonprofit and what we do is raise money to benefit families and individuals across the country that was born with Spinal Musoular Atrophy, which Adyn was born with,” Brian Said.

The live string band “The Coal Cave Hollow Boys,” selected by the guest of honor Adyn, entertained those attending the birthday bash.

“Most of the time I pick the musicians that I want to be at the charity event,” Adyn said. “Then dad tries to make that happen.” 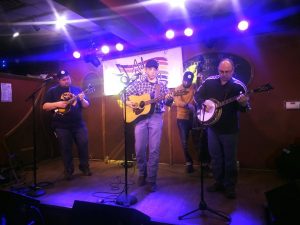 Adyn has become a public figure in Athens, Ohio. Therefore, Ohio University Sorority Chi Omega has granted her a Universal Studios Harry Potter trip through The Make-A-Wish Foundation and the women’s basketball team has named her an honorary member.

“We support Adyn because she comes to all of our games and she has been a member of our team for five years,” she said. “She’s always there cheering us on, so we support her dream, just like she supports ours.”

As the night concluded, Adyn’s father delivered a special birthday message to his daughter. 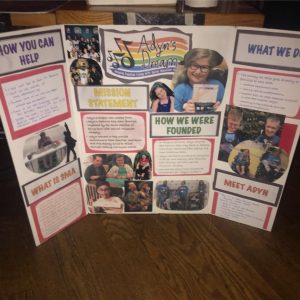 “Adyn has a very difficult year ahead. She is going through SMA treatments,” he said. “She has a really big spinal fusion surgery that is scheduled at the end of March, which will be very significant for her. My biggest birthday wish is that she keeps her chin up like she always does and continues to fight for it.”