The Athens High School boy’s basketball team has had four games rescheduled this season – they finally got to play in front of their home crowd Tuesday in a dominant 88-38 victory over the Wellston Golden Rockets, a TVC-Ohio rival.

“I try not to let our kids focus on external factors,” Athletic Director John Rogers said. “It’s outside of their control. If they focus too much on it, then I don’t think they’re very strong – so, h 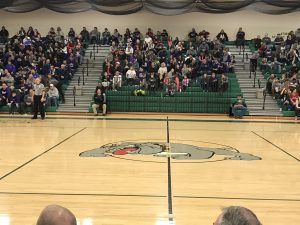 opefully our team isn’t affected too much from having a 5 game away stretch.”

Rescheduling games is a long process for Rogers who prefers  having a decision about that evening’s games by 11 a.m., so that he can let everyone know about the cancellation, from cheerleaders to  coaches to boosters.

Cancelling is one thing, rescheduling is a whole different animal.

“You can’t just pick a day, throw it out there and say yeah this’ll work,” Rogers said.

Two games, Alexander and Morgan, could be rescheduled only after the OHSAA tournament seeding selection, meaning an on-fire Athens team will have two less games to prove themselves to the committee of coaches.

“That’s the one downside for us, because we’re kind of getting our stride of late,” he said.

It’s more than just basketball games that are affected by these cancellations. Robert Maxfield, father of Athens starter Logan Maxfield, will miss the last two games of the regular season due to the rescheduling.

“Other than [the last two games] I’m happy to see what I see,” Maxfield said.

Robert has also missed games when they were rescheduled on weekends he had to work, but he’s still a proud father.

“He [Logan] is exceeding my expectations in the classroom and on the court,” he said.

In the return home, Athens shot 65 percent from the field against the Golden Rockets and the starters were getting rest in front of the home crowd with five minutes left in the third quarter. Eleven separate Bulldogs scored in the rout. Nine of the eleven scored points in the first half, and that’s without Justin Hynes, Athens’ leading scorer, putting a single shot in the basket.

Coach Mickey Cozart says he thinks the weather has no effect.

“We have the same attitude whether we’ve been off for a couple days or we’ve been grinding for 5 days in a row.” he said.

The Bulldogs have pushed their way to six straight wins.

Bulldogs Blow Out Buckeyes In 2nd Half To Win 5th Straight