The Federal Hocking Lady Lancers’ season came to an end at the hands of the Peebles Lady Indians Saturday afternoon in a 54-33 defeat at Jackson High School.

The Lady Indians came in con 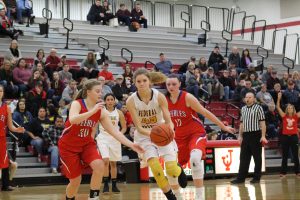 fident and quickly outpaced the Lady Lancers. Peebles came into the game prepared and made their shots, racking up 13 points in the first quarter while Federal Hocking put up only three.

The Lancers attempted to strike back by outscoring the Indians in the second quarter, bringing the score up to 25-17 at the half. Peebles remained in the lead.

It was still anyone’s game heading into the third quarter. With the Indians ahead, the Lancers were left with two choices: press harder or be pressed upon.

Unfortunately, the Lancers selected the latter and failed to make crucial plays. Federal Hocking blasted with full energy but still could not score.

The third quarter brought only seven points for the Lancers while the Indians ran away with 16.

At this point in the game, Federal Hocking was left with few options to be able to beat Peebles. The girls pressed on but were never able to match the pace of the Indians.

It’s not to say they didn’t go out without a fight.

The Lancers kept up an incredible stamina and attitude even though they trailed the entire game. They remained persistent and fought their way through the finish.

This year might not have been their year, but the Lady Lancers are a young team and are looking ahead to next season. Freshmen Paige Tolson, Kylie Tabler, and Emma Beha are rising stars to watch out for in the coming season. They’re looking to lead the team and become a powerful trio in the TVC.

Eastern Takes Over in Third Quarter over Federal Hocking