In this installment of Conversations from Studio B, learn about the upcoming production of “Kiss Me Kate” coming to Stuart’s Opera House by way of the ABC Players. 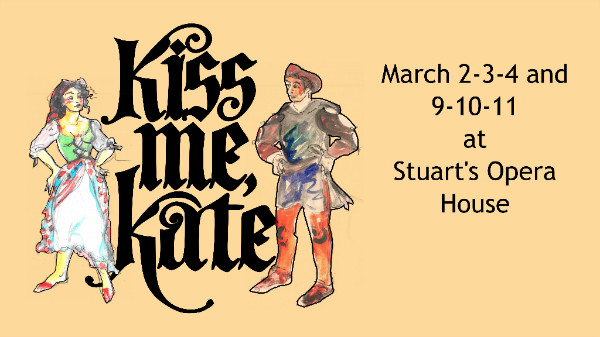 It’s 1948 in sultry Baltimore, and actor/producer/director Fred Graham is trying to get his new production of Shakespeare’s “The Taming of the Shrew” ready for opening night. Fred’s co-star and former wife, Lilli Vanessi, is angry because of Fred’s seeming infatuation with a new ingenue, Lois Lane. Lois’s boyfriend and fellow cast member, Bill Calhoun, has just lost $10,000 in a floating crap game, and has signed Fred’s name to an IOU in order to make it to the theater in time for the opening performance. The other cast members have the usual opening night jitters. To turn up the heat still further, two gangsters arrive at the theater to persuade Fred to pay up on the (unknown to them) forged IOU. Could anything else go wrong? Well, Lilli’s new fiancé, General Harrison Howell, might show up . . . .

You won’t be able to catch your breath between laughs. As one of the gangsters remarks about Fred Graham’s production, “It’s entertaining, vivacious, and calculated to please the discriminating theater goer.”

ABC Players to Hold Open Auditions for ‘Kiss Me, Kate’