The Bee Gees might be one of the most polarizing names in pop music. To music nerd, they are a British/Australian trio who managed to write, record, and produce some of the most unique earworms of the 20th century. To just about everyone else, they’re the guys with the big hair and comically high-pitched voices responsible for the Saturday Night Fever soundtrack.

On Saturday, March 3, WOUB-HD will broadcast Bee Gees One For All Tour – Live Australia 1989 at 8:30 p.m. The program documents the group’s third to final stop during their 1989 global All For One Tour in Melbourne’s National Tennis Centre, about a decade after their disco stardom and over three decades after the group’s 1958 formation. Check out this link to keep up to date about encore presentations of the program.

“That tour would have been before time starting taking the brothers Gibb away from us one by one,” said Eddie Ashworth, a professor in Ohio University’s School of Media Arts and Studies. Ashworth is a seasoned recording industry professional and an expert in the fields of music production, song and lyric composition, and analog audio assessment, among many other things. “By 1989, the Bee Gees were a major force in pop music – there is a great argument to be made for them being the main group to popularize disco. Love it or hate it, it can’t be denied that the songs on Saturday Night Fever are consummately well-crafted.”

The special features many of the Bee Gee songs that are commonly associated with the outfit, like “Stayin’ Alive,” “Jive Talkin’,” “How Deep Is Your Love,” and “Nights on Broadway,” as well as a smattering of deeper material – such as “New York Mining Disaster 1941” (the single that introduced them to American audiences in 1967,) and “Spicks and Specks,” the group’s first Australian hit from 1966.

“Although by that point in the Bee Gees’ career I was not paying too much attention to them, it was a period wherein they could pull out all of their songs for appreciative audiences, sell out arenas and make a ton of loot,” said Ashworth. “By then they were past the peak in their career, but they were still formidable singers with a great stage presence, doing what they do best: sing together.”

“By 1989, the Bee Gees were a major force in pop music – there is a great argument to be made for them being the main group to popularize disco, and love it or hate it, it can’t be denied that the songs on Saturday Night Fever are consummately well-crafted.” – Eddie Ashworth

Ashworth said the Bee Gees are responsible for one of his top 20 favorite albums of all time, 1969’s red-velvet covered Odessa.

“The Bee Gees are a fascinating band, I love them. I guess my least favorite period of their work is also their most popular, when they reinvented themselves as disco maestros for a new audience. But I’m a big fan of their beautiful early pop hits, like “I Started a Joke” and “New York Mining Disaster 1941,” he said. “But it is their middle era, after their string of early hits, that I like best. They were experiencing a dip in their popularity, and so they did what so many bands of the period did: they released a double album.” 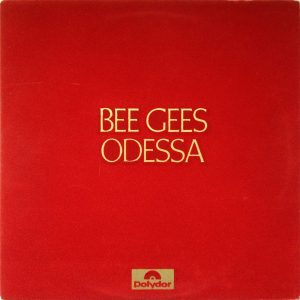 The release of the Beatles’ White Album in 1968 proved that double albums could be commercially successful, which led to many other groups releasing indulgent records with ostentatious artwork and over-the-top themes.

Perhaps the album’s lavish nature could be best summarized by examining the series of title changes that the work underwent over the course of its production: first An American Opera, then the showy Masterpiece, and finally Odessa. It is also worth noting that the red flocked cover with the simple gold lettering, (with an absence of any photographs of the group or mention of them other than a note that all the songs were written by B, R & M Gibb,) is incredibly rare, as it was discontinued due to the high cost of production and allergic reactions among the assembly line workers producing the album.

“Odessa is one of those great, underappreciated classics. It is an example of record you just could not make today, theoretically there just isn’t a market for it. It’s amazing to me to look back on the time period in which it was released, when such a willfully uncommercial record could be made,” said Ashworth. “But even though it’s very indulgent, and heavily orchestrated, the song-smithery is certainly still there. It’s one of the craziest yet most accessible records ever made, and the Bee Gees are totally behind it. Everything about the Bee Gees is all over this album; this crazy, overblown, indulgent, yet oddly affecting two-record set with a velvet red cover.”

When quizzed on his theory for the sort of collective dismissal of the Bee Gees as a serious rock act, Ashworth said that it has more to do with the listeners than the brothers Gibb.

“A lot of people just worry too much about what is considered cool and not cool. The Bee Gees, like the Moody Blues and The Monkees, kind of exist in their own space,” he said. “People often take for granted writing good, catchy, memorable songs – a lot of people think that it’s easy to do. But it is not easy. It is much easier to pick up an acoustic guitar and sing some ‘poor me’ lyrics – but to be able to communicate universal truths through memorable melodies and lyrics that are carefully chosen and chiseled is a true art form.”