Help On Tap For Troubled Water System In Coal Country

A water system in eastern Kentucky that was on the verge of collapse could soon get much needed improvements. Many Martin County, Kentucky, residents were without water for long periods this winter. The crisis drew attention amid a national discussion about infrastructure priorities, and put a spotlight on the sort of water woes that are all too common throughout Appalachian coal country.

Now nearly $5 million in federal funding is on the way to patch up parts of the Martin County system. But the flow of federal money comes amid lingering concerns about management and spending by local officials, and questions about how Martin County’s water system got into such a state of disrepair.

The water system has been a contentious issue for more than a decade in Martin County, a community that has mined billions of dollars worth of coal, but has been left with crumbling infrastructure and a poverty rate of nearly 40 percent.

The water district consistently loses more water to leaking pipes than it delivers to paying customers. As the ReSource reported last January, residents have complained that their water is often contaminated, and frequently shut off without warning.

The county’s top elected official, Judge-Executive Kelly Callaham, acknowledged that the water system had problems, but said he thought the complaints were overblown.

“Not one time have you seen Martin County out of water for several weeks at a time,” Callaham said. “It won’t happen, we have too good a system for that.” 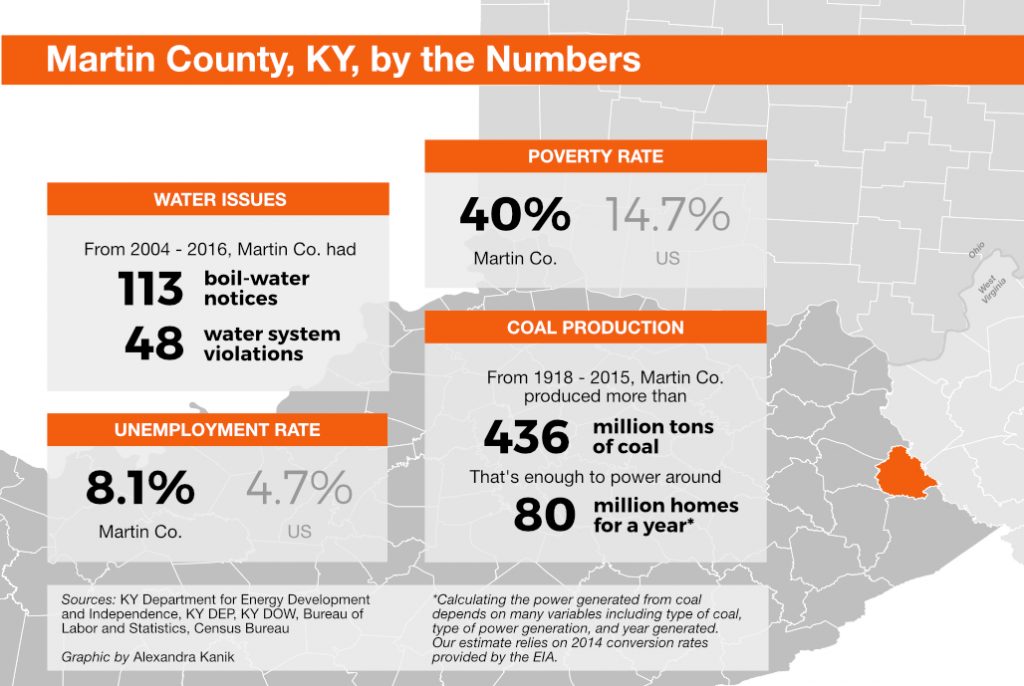 This winter, the county’s water intake on the Tug Fork River froze, and neighboring districts were not able to provide extra water. Some sections of Martin County had water cut off every day for over a week. Many were forced to draw water from creeks and springs to be able to drink, bathe, and flush their toilets.

Emotions boiled over at public meetings. At a hearing in January, Martin County resident Gary Hunt was grabbed by the throat by an officer and arrested after using profanity to express his frustration.

The incident was captured by local television station EKB news, and the video quickly went viral on social media, bringing a new wave of media coverage.

Hunt is still awaiting his trial for disorderly conduct, and is still angry about the water situation. “[You] speak out here [you] get treated like s**t,” Hunt told the ReSource in a Facebook message. “But that’s fine, one day we will have changes.”

That attention has added public pressure to find more funding to help Martin County. The water district has now been awarded nearly $5 million in federal grants in the last year. The county was granted $1.2 million from the Appalachian Regional Commission late last year to allow the water district to replace some of its leaking pipes instead of continuing to patch them.

In late February Kentucky Republicans Rep. Hal Rogers and Governor Matt Bevin announced a $3.4 million grant from Kentucky’s portion of money from the federal Abandoned Mine Land Fund. That is meant to pay for upgrades to the county’s intake, reservoir, and treatment plant. Part of that money comes from a pilot project that directs Abandoned Mine Land funds to economic development projects, which could be made permanent through the proposed RECLAIM act.

In addition to the new federal funds and national media coverage Martin County residents have started to receive help from a growing number of nonprofits, including legal help from the Appalachian Citizens Law Center, support from noted activist Erin Brockovich, and publicity and research help from the advocacy group Food & Water Watch.

Last year, the county government estimated it would need $13.5 million to rebuild the water system, work which would happen in several stages. Currently the district has no way to refill its reservoir because some pumps have failed. The district is over $800,000 in debt, and is hoping to hire a general manager in the coming months. The county recently requested a 50 percent rate increase, which is now being considered by the Kentucky Public Service Commission, and widely protested by the utility’s customers.

Meanwhile, many of the people responsible for the water district have resigned. Four of the of the county’s five water board members quit their posts, and this past week the water districts’ manager followed suit. Judge Callaham, who has faced criticism for building a $10 million government center instead of investing in the water system, had already announced that he will not seek re-election.

Martin County has a long history of struggling to find reliable leadership. A number of elected officials have faced charges for embezzlement, some of which took money away from the water district. Current officials have also been accused of gross mismanagement of the county’s funds.

Denise Thomas of the Big Sandy Area Development District helped to write the water district’s grant proposal. She said it still is not clear who will manage the newly awarded funds but that her office, which serves five counties in the region, will remain involved.

“We ensure that funds are spent in accordance with the funding agency that is involved,” she said.

Thomas also works with utilities in neighboring counties and said that many of them are in a similar situation.

“Most utilities are facing similar issues as far as maintaining their utilities,” she said. “It’s a challenge for all of our rural communities.”

Gail Brion, a water system expert and professor at the University of Kentucky, said Martin County’s experience fits a pattern she sees in many economically marginalized areas.

“Here’s a community that can’t afford to replace their infrastructure,” Brion said. “But because it doesn’t impact the people that control the money, they’re ignored until something large and catastrophic happens.”

Several other counties in eastern Kentucky and southern West Virginia have endured long-term water outages, which create closings at schools and other public facilities and can give rise to significant health risks. Throughout central Appalachia, a lot of water systems are continually failing, but haven’t yet faced the kind of catastrophe that could bring attention and funding.