Local communities throughout southeast Ohio are built on small businesses and local flare. One of the sad realities of communities in this area, however, is the struggles to keep small businesses afloat. While some areas in southeast Ohio boast a rich history, many towns today are increasingly abandoned, which stifles opportunities for entrepreneurs.

If you drive down main street Shawnee in Perry County, you see the rich history in the wooden facades, but you also see that most of those facades are dark and empty. A hundred years ago, Shawnee was the center of entertainment for the region. It was full of customers and cash registers ringing.

George Biggs used to own a bar in downtown Shawnee and has lived in town most of his life. Coal was king in southeast Ohio back then, and even though Biggs looks to the future, he lived through the rich history of Shawnee.

“As the coal veins were depleted the coal companies were never locally owned.  They’re always out of state people, when the coal ran out they pulled out and took their money with them and left us with bad stuff,” Biggs said.

Organizations Step in to Aid Growth

Dan Vorisek, a Rural Communities Entrepreneur Coach, tries to encourage local businesses. He works for Rural Action, a non-profit organization, that is stepping in to help these small communities work on their economic development. He looks for opportunities in southeast Ohio counties to help communities build a good reputation as a place to invest for small businesses.

Shawnee has plenty of space and good access to internet and cell-phone service, but there are still some things missing. “In a lot of these communities it is the lack of access to capital, or financing to get started,” he says. It takes time to rebuild an infrastructure in a rural area like Appalachia.

“When we say lack of capital, sometimes that’s a perception on the part of a person,” Vorisek says. “And historically some of the larger banks have not been interested in investing in new businesses because of the risk level. So that made it difficult for businesses to start out. And very often they fall back onto their own small savings and money from friends and families.”

Shawnee is one of six different communities Vorisek works with to grow business ventures in the area. The goal is to engage locals in figuring out what their town needs and what obstacles are getting in the way.

For Shawnee, one of those obstacles was the environmental ravages coal mining left on the land. Acid mine drainage, which is acidic water flowing out of abandoned coal mines, is one of the biggest problems. George Biggs remembers there didn’t used to be any fish in the local streams and there were “high walls and gob piles. But Rural Action, they have done wonders bringing aquatic life back to the streams,” he says.

As communities like Shawnee restructure their environment, they are also providing a building block for new businesses. Renee Brunton, Mayor of Shawnee, sees potential for growth and opportunity in her small town. She talks about tourism that the surrounding Wayne National Forest, local campgrounds, and Lake Tecumseh could bring to Shawnee. “We have been working to create not only for tourism, but also for the folks that live here,” she says.

Tourism is a Future Hope

Brunton and Vorisek both believe that Shawnee can’t be rebuilt only on tourism. They need to bring those empty storefronts back to life.

The Shawnee Mercantile did that with an abandoned space. Locals Bev Trovato and Deb Hutmire opened it last year and it’s doing well, selling things such as antiques and home and garden supplies.

“Well, two years ago we did a crafts show here for the town. They were having a few vendors set up for the homecoming. And Deb and I said ‘Let’s make a few things’, set up and see how we do. So we set up and we did great and people were wanting to know if we had a store,” said Trovato.

Since Trovato and Hutmire both work day jobs during the week, they only open the Shawnee Mercantile during weekends. They say it’s a great place for tourists to stop by as well as a community gathering place for locals.

Poverty is a Massive Weight

To better understand why it’s so difficult for local small businesses to start up and sustain, you have to also look at the demographic make-up of these communities. In Perry County, one out of five residents lives below the poverty line. An average person lives on about 20-thousand dollars a year, five thousand less than the state average. Residents who can barely support their families don’t always have the extra dollars to support their community businesses. 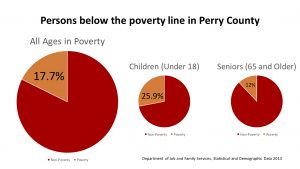 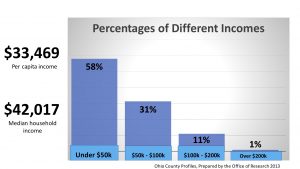 Businesses are dependent on their customers and as these numbers show, purchase power for many residents is a challenge. Therefore, entrepreneurs need to find a niche in a local area to build a business that is both needed and unique.

The Arts Make a Comeback

For Shawnee, the niche is to restore the historic theater and bring back the possibility of an entertainment hub in the area. George Biggs and other residents work on renovating the old theater on Main Street. They hope it will bring back a spark of life and also bring in more economy.

The group has restored the ground floor already and made the building accessible to everyone. The space is usable for the many different community needs and they are now working on rebuilding the first and second floors.

“It’s our diamond in the rough at the present time,” Biggs says. “But in hopes of having it completely restored back to as original as we can possibly keep it.”

But Biggs knows that it will take time. “As far as a timeline, we have no idea. We get small chunks of money and we spend that money to be the best of our ability and do whatever we can with it to further the restoration effort,” he says.

George Biggs is happy about the positive changes in Shawnee.

With few big corporations in the area, it’s hard for these small businesses to grow out of the local market. So, they have to rely on their neighbors as the best chance to succeed.

“By supporting the people that make that happen, which are your local entrepreneurs, this is where it is going to happen,” Vorisek says. “This is the direction where rural America is going. And that rural America can really lead the way in the U.S. on how to develop a strong local economy.”

One step at a time—that’s the approach that Shawnee and many small communities are taking to find their way back to thriving main streets.  Besides Rural Action, there are other programs that work to revitalize rural Ohio. Many of these communities are still trying to bounce back from decades of larger employers supplying the majority of income and economic growth. The goals for success can only be long term, but they are possible.

The historic theater is in the process of being renovated. Once it is done, residents want to use it as a center for community gathering.

Grant, Loan Money For Southeast Ohio To Be Announced Friday