Three Iconic Mountain Ranges — the Rockies, the Himalaya and the Andes — and the Extraordinary Animals and Remarkable People Who Call Them Home

KINGDOMS OF THE SKY, a new three-part series made in conjunction with the BBC’s Natural History Unit, explores the extraordinary animals and remarkable people that make their home in three of the most iconic mountain ranges of the world: the Rockies, the Himalaya and the Andes. Filmed over the course of two years and featuring breathtaking photography, the series journeys to the highest and most isolated places on the planet to reveal how animals and people survive in these rugged terrains. KINGDOMS OF THE SKY premieres Wednesdays, July 11, 18 and 25, 2018, 9:00-10:00 p.m. on WOUB. 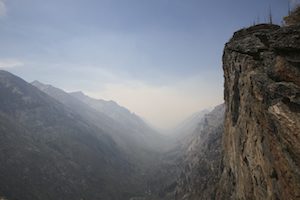 Stretching 3,000 miles and forming the spine of North America, “The Rockies” (Wednesday, July 11) are a beautiful wilderness of snow-capped peaks and hidden valleys. This episode begins in winter in Wyoming, where male bighorn sheep fight for access to mates, a wolverine looks for food hidden deep in the snow in the Canadian north and, in Colorado, mountaineer and extreme skier Hilaree Nelson O’Neill climbs Mount Sneffels and skis down a steep couloir. In spring, a mountain lion stalks a deserted Montana ranch searching for mule deer, while tiger salamanders feast in the temporary ponds of Colorado, turning into cannibals when the food supply runs short. Human daredevils — wingsuit flyers — leap from mile-high cliffs in Montana. In the height of summer, rufous hummingbirds raise their young in tiny nests. These birds have the greatest migration in the whole of the Rockies, flying all the way to the south and beyond, to Mexico, following the flowers. The climax of the episode is the Indian Relay, a breakneck horse race of bravery and split-second timing at the county fair in Kalispell. 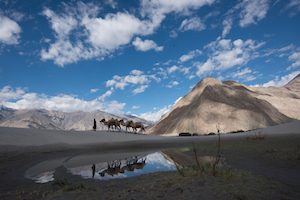 “The Himalaya” (Wednesday, July 18), featuring the highest mountain range on Earth, takes viewers from the foothills to the very summit of Everest. In the frozen forests of China, snub-nosed monkeys snuggle together for warmth during the bitter nights. Snow leopards prowl the peaks of northern India after dark, forcing villagers to lock up their livestock in their own homes. In northern India, schoolchildren journey to school, crossing a deep gorge in a precarious metal basket. In Nepal, a Buddhist monk meditates in a cave high in the mountains, seeing no one for many months, while others create sand mandalas, elaborate designs painstakingly created out of ground mountain rocks mixed with colorful dyes, a skill that takes a lifetime to learn. Mandalas are swept away as soon as they are complete, a symbol of the fleeting nature of life. Higher still, extreme runners take part in the Everest marathon, the toughest on Earth. At 26,000 feet is the summit, where climbers risk the death zone to reach the highest point on the planet. 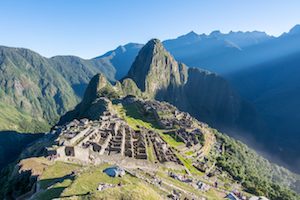 The longest mountain range in the world, “The Andes” (Wednesday, July 25), are home to dozens of hidden worlds, from the driest desert on Earth to cloud forests teeming with life. There are vertical peaks towering over 20,000 feet, but the Andes are also home to the flattest place on earth – a huge salt flat with a bizarre light show every night. In the southern Andes, a puma family hunts guanaco, a relative of the llama. In the Atacama Desert, a lizard thrives in the driest place on Earth. In the rugged peaks of the central Andes, a spectacled bear searches burned hillsides to discover hidden springs for a drink – and a bath. Descendants of the Incas harvest mountain grass and weave it into a bridge across a gorge, a ceremony performed since the time when Machu Picchu was an Incan royal palace. Rarely seen magnificent snow sculptures decorate mountaintops high in Peru, carved by the wind from snow and ice. In the tropical Andes, cloud forests perch on mountainsides, home to tens of thousands of species, including a newly discovered “shape-shifting” frog that can change color and shape when in danger. The only glacier-nesting birds in the world — white-winged Diuca finches — raise their young on the Quelccaya glacier, where the danger to the chicks is not the cold, but the heat of the sun as it melts the face of the glacier.

KINGDOMS OF THE SKY is presented in conjunction with BBC Studios.

Funding for the series is provided by Anne Ray Foundation.

About PBS Summer of Adventure
KINGDOMS OF THE SKY is part of the PBS Summer of Adventure, taking viewers and their families to some of the most remarkable destinations in the U.S. and around the world. The lineup of programs includes the six-part new series NO PASSPORT REQUIRED (July 10), a culinary and cultural tour of America’s diverse communities with Chef Marcus Samuelsson, and the second season of the three-part EARTH’S NATURAL WONDERS: LIFE AT THE EXTREMES (July 11), which journeys to parts of the natural world where human survival is pushed to the limits. Also returning are three new episodes of 10 THAT CHANGED AMERICA (July 10), the popular series that takes viewers on a road trip to discover the streets, monuments and modern marvels that changed the nation. Two new three-part series explore fascinating places: THE OUTBACK (August 1) treks to the outer regions of the remote Australian wilderness, while WONDERS OF MEXICO (August 1) explores the amazing wildlife and culture of the country, from its tropical forests to its deserts.

How to Make Pour Over Coffee