Scott Winland of Blackout Booking and The Union and Kelly Lawrence of ARTS/West are doing what they can to make Athens an “arts destination.” The duo are two of the people behind the first ever Athens Community Art and Music Festival, which is slated to take place in uptown Athens August 17-18.

The proceeds from all of the musical performances throughout the festival will go towards Stuart’s Opera House’s After School Music Program, ARTS/West, and The Gathering Place’s music program. On Saturday night, Stuart’s Opera House will also be hating an outdoor beer garden featuring Jackie O’s brews, the proceeds of which will benefit their after school music program. 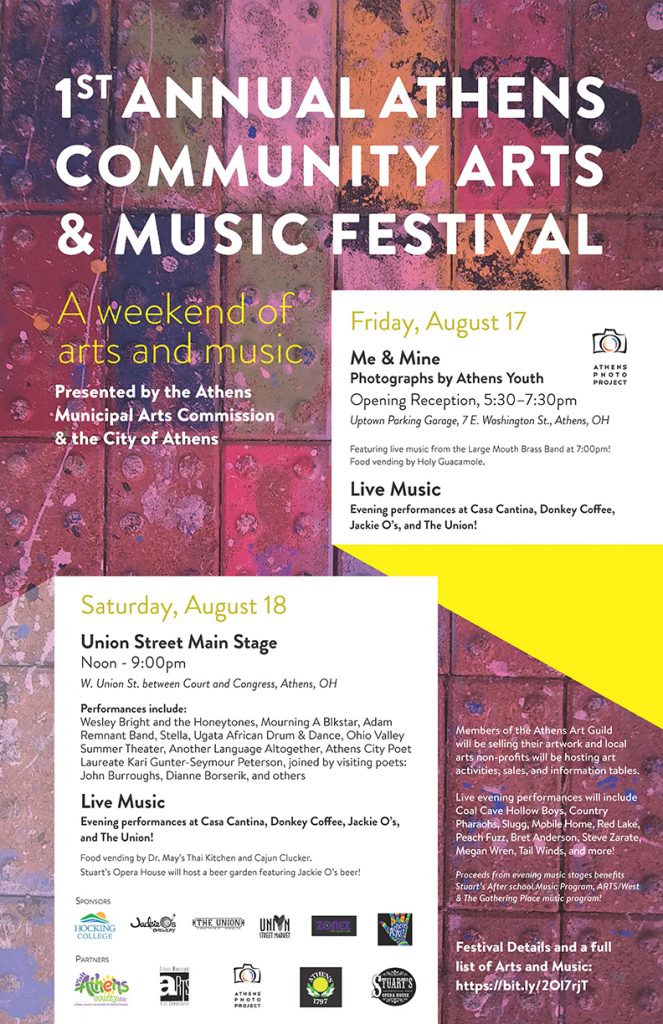 Check out the full schedule of events below.

Saturday, August 18, 12 p.m. – late into the night
12- 9 p.m. – Outside on Union Street between Congress and Court Streets there will be the main festival with visual artists from the Athens Art Guild and Paper Circle selling their artwork and arts non-profits offering information on their organizations and arts activities.

Dr. May’s Thai Kitchen and Cajun Clucker will be on hand selling their food and Stuart’s Opera House will be selling Jackie O’s beer to raise funds for their After School Music program.

The main stage shifts its focus to music featuring headliners Wesley Bright and The Honeytones, along with the Adam Remnant band, Stella, Hellnaw, Mourning A Blkstar and Mobile Home.

Check out a Spotify playlist with some of the artists performing at the first ever Athens Community Arts and Music Festival below.