There’s a worrying slowdown in progress against medical conditions that disable, sicken or kill.

That’s the message in an editorial in the November 10 issue of the medical journal The Lancet. The editorial accompanies reports from a massive research project called Global Burden of Disease, which counts cases of disability, illness and death around the world. In sobering words, the editorial warns that mortality rates from various conditions are no longer decreasing, new epidemics (think opioids and dengue) are occurring, and we shouldn’t be complacent. The studies themselves show an increase in obesity and a stall in life expectancy increases in countries such as the U.S. and U.K. as well as increasing rates of some conditions such as liver cancer and hypertensive heart disease.

We talked to The Lancet’s editor, Dr. Richard Horton, about why he finds the situation so grim, and where he sees hope.

This conversation has been edited for length and clarity.

The editorial that accompanies the studies say they’re an ‘urgent warning signal from a fragile and fragmented world.’ Isn’t that a bit strong?

I would say that’s an understatement. The prospects for protecting health in the face of growing threats are really disturbing. One of the papers for example looks at how many health workers we have in the world. Half the countries of the world have fewer than 1 doctor per thousand population, and fewer than 3 nurses or midwives per thousand. The message that tends to be put out is that we’ve made this astonishing progress in life expectancy. So policy makers and prime ministers and presidents not unreasonably think health is a job that has been done. It’s really tough for countries that don’t have the resources to educate and train health workers for the task at hand. This is where the responsibility of the richer world has to be — how can we help those countries train the people necessary to address the threats that they face.

The current issue includes eight studies about everything from causes of disability to whether individual countries are likely to meet the Sustainable Development Goals – the 17 global health and well-being goals set by the United Nations for 2030. Is there any one number or finding that gives a good indication of where the world’s health is at and where it’s going? 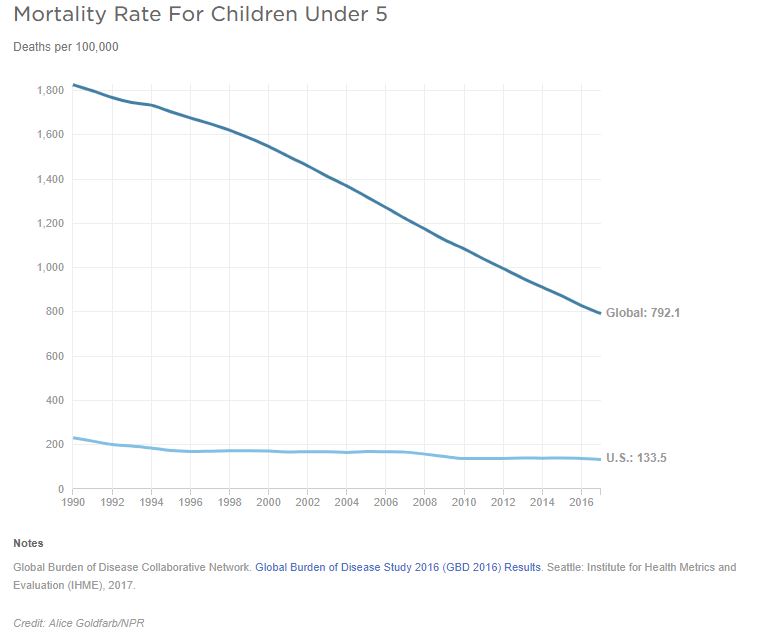 But then the other finding which I think is really worrying is that there’s not one single country that is on track to meet all the health-related Sustainable Development Goal targets, not one country.

When you look through the whole Global Burden of Disease there are so many things that are shockers. We have seen declines in mortality rates but those declines are now plateauing. For men and women in many countries they’re stagnant because of an epidemic of chronic diseases. Obesity is now leading to a million deaths every year from type 2 diabetes, which is truly alarming.

And although we’re living, we’re living longer with one or more chronic illnesses. That’s the paradox in all of this. You just look at the headline figure of life expectancy, and you think, wow, what an astonishing achievement we have made. But you look underneath that and you see that actually we’ve created a population that is dealing with multiple physical and mental health problems. It’s a consequence of the gain in life expectancy. These extra years of life are sometimes not healthy. 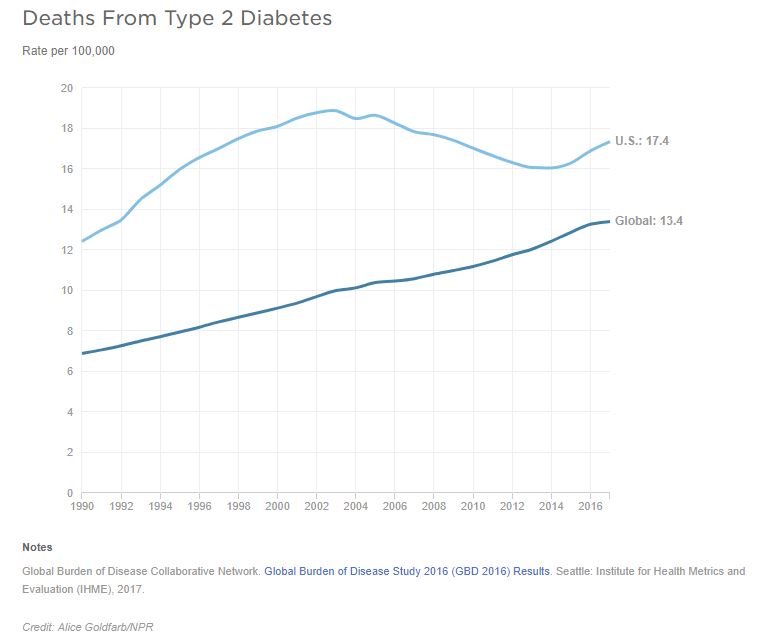 Are you seeing a lack of progress in both rich and poor countries?

The problem for the rich countries is that although they’re doing well in some areas like maternal and child health, the fact is if you take chronic diseases and the risk factors for those diseases, particularly obesity and diabetes, there’s no country in the world that’s been able to successfully tackle all of them. The four big issues for me are blood pressure, tobacco, diabetes and obesity. And unless we get those four dangers under control, we are not going to be able to see the continued gains in life expectancy and well-being that we’ve seen in the past. The epidemic of chronic diseases combined with rapid population growth especially in some of the poorer countries is going to create a time bomb in the coming decade. 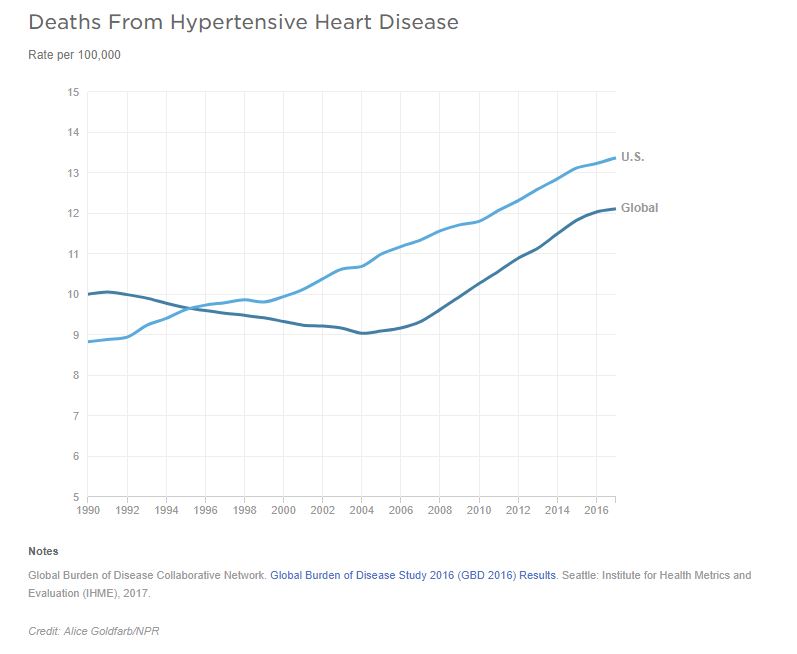 One of the studies zeroed in on disabilities – the damages that keep people from doing what others can do – problems such as chronic pain or mental illness, for example. Was there anything in the study on the impact of these disabilities that particularly surprised you?

For the first time this year, the Global Burden of Disease separates the disability data for men and women. And it’s a shocking story for women. Women have a huge burden of life lived with disease, much more than men. I’ll be honest, I’ve followed global health day in day out, and I couldn’t believe this when I saw it. It’s just so striking, and it completely changes the way you think about health between the sexes.

[The chart, on page 1833 of this article shows considerably more women than men suffer from conditions like that can disable them, anything from mental disorders to back pain)

There are things that sometimes we don’t take very seriously, such as musculoskeletal disorders by which I mean things like arthritis and back pain. It seems trivial compared with a heart attack, but they stop you from doing your job, from interacting with your family, they confine you to your home or bed.

The reasons for this are not fully clear, but women suffer pervasive discrimination, inequity, disempowerment and social exclusion in their societies. Health services are typically poorer and less responsive to women’s health needs. And the failure to ensure stronger participation of women in politics and the formal economy means that women are in a weaker position to demand the services they need.

What else worries you?

We also have got figures now for what the Global Burden of Disease describes as this ‘era-defining epidemic of opioid dependence’ — four million cases of opioid dependence worldwide. It’s in some ways such a huge amount of data it’s hard to get your head around all in one go. 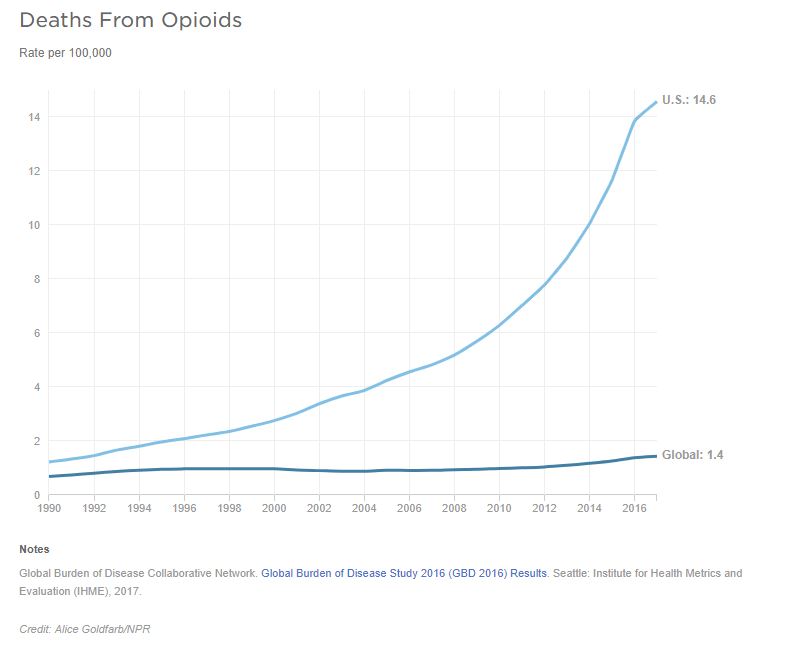 And the health effects of conflict and terrorism are on the rise, especially in poor countries?

Conflict and terrorism is now the fastest growing cause of injury-related death. [Nearly 130,000 deaths in 2017, up 118 percent from 2007.] If you look at books like Steven Pinker’s Enlightenment Now, he paints a story of astonishing progress for the human species. But if you look at the data, we’ve got these signals which are alarm bells. Conflict is definitely one of them.

What about infectious diseases? Any concerns here?

Although we have made progress in controlling many infections, we’re also in an era where some infections like dengue, plus antimicrobial resistance, threaten the gains we’ve made in the past.

Because we’re seeing rapid urbanization, the quality of life of people living in our cities, in slums and shantytowns, is really poor. And in those areas where dengue is endemic we’re creating human habitats that are fostering infectious diseases. 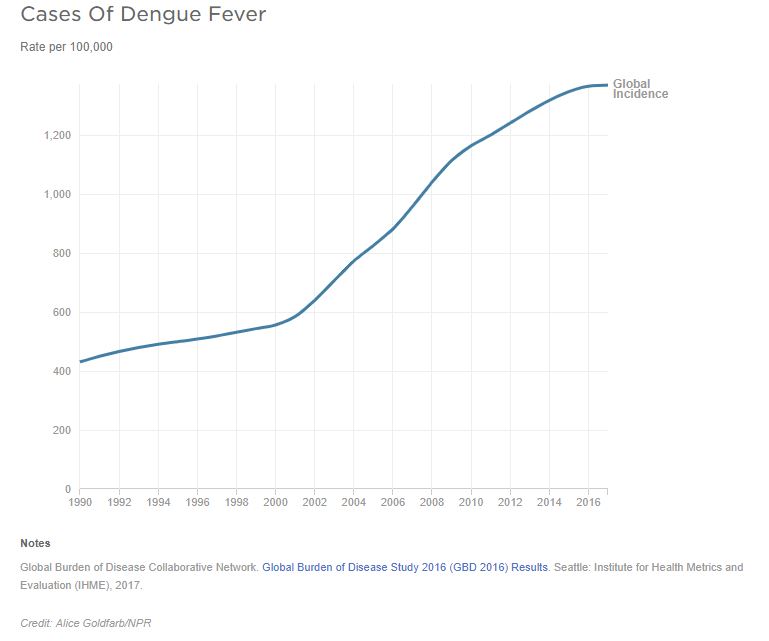 We have to see health as one of the most important investments to protect the stability of our societies. Health is not just about health, it’s also about political stability, economic stability and the security of our nation states. If you don’t have decent health systems people are going to erupt in the face of these epidemics that are not being addressed.

Bottom line – are you optimistic or pessimistic?

At the moment we’re all so wrapped up in Brexit and Trump that we’re not looking at the long-term future of our societies. I think we can stir the debate by trying to tell the truth about the risk we face and hope that people wake up.

The Global Burden of Disease is funded by the Bill & Melinda Gates Foundation, which is also a funder of Goats and Soda.

Joanne Silberner, a former health policy correspondent for NPR, is a freelance journalist living in London.

Inclusion and Accessibility For People Living With Disabilities: Why It Matters Now More Than Ever

Ohio Health Officials Recommend Some Get Hepatitis A Vaccine

Scientists Hunt A Test For Chronic Injury In Living Brains