Premieres Sundays, January 13 and 20 on PBS

VICTORIA & ALBERT: THE WEDDING, a new two-part series hosted by popular Royal historian Lucy Worsley, premieres Sundays, January 13 and 20, 2019, 10:00-11:00 p.m. on WOUB. A BBC Studios production for PBS, this entertaining series provides an insider’s look into the elaborate planning that went into one of the most famous weddings of all time: 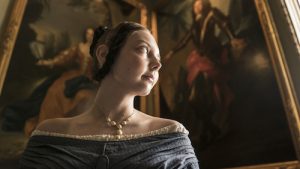 the romantic 1840 union of Queen Victoria and her consort Prince Albert. With the help of a team of experts, Lucy oversees the meticulous recreation of the most important elements of the wedding celebration, scouring history books, archives, newspapers and even Victoria’s own diaries for details. The perfect accompaniment to the latest season of MASTERPIECE’s hit series “Victoria,” VICTORIA & ALBERT: THE WEDDING is a unique celebration of an enduring love that captured the imagination then and now — and a wedding that set the standard for generations of future brides everywhere.

Lucy is joined by food historian Annie Gray, clothing expert Harriet Waterhouse, military historian Jasdeep Singh and more. From the bouquet and the beautifully tiered cake to the music for the ceremony and the wedding gown — Victoria’s game-changing white dress started a tradition that still lives on — each element has been carefully researched, remade by hand, and finally put to use in a joyous recreation of the big day itself. Throughout, Lucy and her team unpack and explore the hidden iconography and symbolism of this hugely significant wedding. They uncover new insights into Victoria and Albert’s relationship, both public and private, and shed fascinating new light on the broader implications of the wedding. The series reveals how the pomp and pageantry secured the nation’s unwavering attention as Victoria gained favor with her subjects and invented the modern ideal of marriage.

“In 1840, two 20-year-olds became the most important power couple on earth,” said Worsley. “The marriage of Queen Victoria to Prince Albert of Saxe Coburg was a pivotal moment in British history. It was a political union that became the greatest royal love story of all.”

Lucy Worsley introduces the team of experts who will join her in reconstructing the wedding that changed history. As they get ready for the ceremony and investigate the stories behind the dress, the food and the music, they uncover surprising details while the reality of their enormous undertaking comes into focus. As they labor, Lucy and her co-presenters reveal the backstory of the most romantic of all Royal romances, a tale of tragedy, scandal, intrigue – with a whiff of revolution. 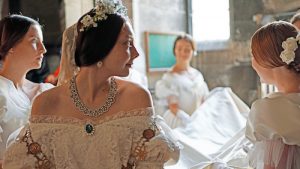 Lucy and her team are in their finery for Victoria and Albert’s big day. The ceremony is the culmination of the love story at the heart of this series, and the most accurate reconstruction of the event ever staged. It’s also the launching point for an examination of the feuds and political undercurrents that meant that this union had to be a fresh start for the monarchy, with a new kind of Royal family. The ceremony is followed by a sumptuous wedding breakfast prepared in a Georgian kitchen by food historian Annie Gray, a prelude to the first night that began a marriage so iconic it saved the Crown and heralded constitutional monarchy as we know it today.

VICTORIA & ALBERT: THE WEDDING is written, produced and directed by Ian Denyer, edited by Alison Hunt and Helen Wickham, and executive produced by Jon Swain and Jack Bootle.

Join PBS for ROYAL WEDDING WATCH, a Special Nightly Series on the Marriage of Prince Henry of Wales and American Meghan Markle