Tracking The Money Race Behind The Presidential Campaign

Raising money isn’t just a necessity for candidates hoping to make it through the long and expensive presidential primary process — it’s a way to measure candidates’ credibility and staying power in a crowded field.

Democrats are dealing with their largest primary pool in at least 40 years, and how they fare in raking in cash could separate the candidates in the pack.

Here are the financial figures that the candidates, including President Trump, have reported to the Federal Election Commission, so far.

These numbers reflect the total amount raised for the first quarter of 2019. This includes, among other sources, money raised from individual contributions and money transferred from other campaign accounts, such as a candidate’s past Senate or House campaign: 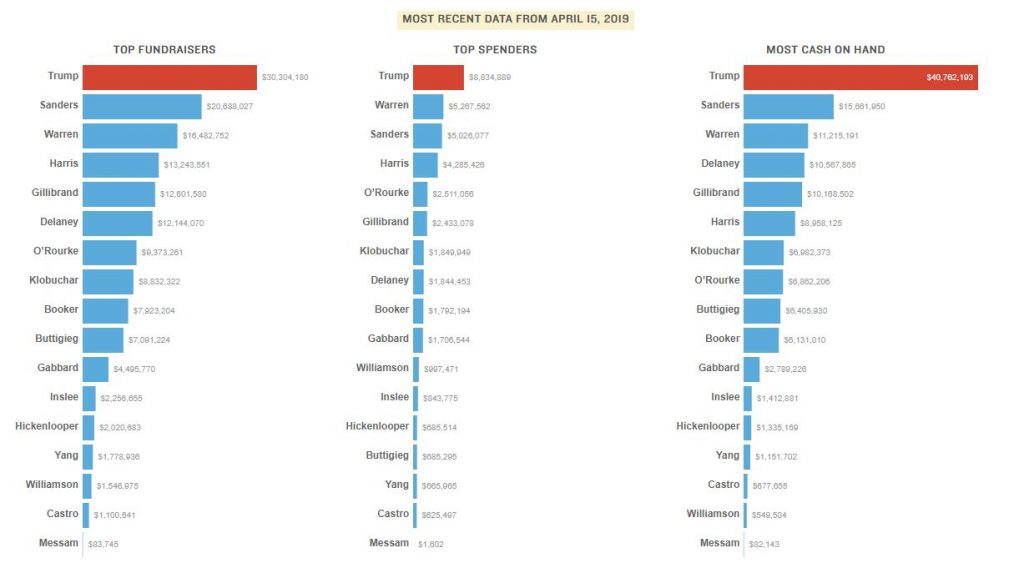 There are also more detailed fundraising metrics that give the public an idea about the priorities of the candidates and how they run their campaigns.

Democrats have widely rejected, for example, support from corporate political action committees. While these committees have allowed businesses and trade groups in the past to funnel huge amounts of cash to eager candidates, Democrats have become increasingly worried about the appearance of businesses having undue influence over the political process.

Campaigns are also making a point of touting the amount they have raised from small donors (those who give less than $200). These donors, who don’t have to disclose their names or information, can represent the measure of a candidate’s grassroots support. That, of course, doesn’t always translate to primary delegates — as Vermont Sen. Bernie Sanders learned during his unsuccessful bid for the presidency in 2016 — but it certainly gives candidates staying power.

Candidates are required to file quarterly reports with the Federal Election Commission through 2019 and then will switch to monthly reports if they’ve raised or spent at least $100,000.

Total money raised for each candidate includes the following: 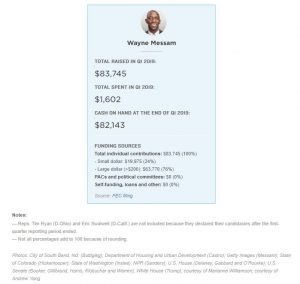 Can’t see the graphics in this story? Click here.

Judgeship Race Was Close, But Not Campaign Spending