Hiring rebounded strongly in June as U.S. employers added 224,000 jobs. That’s well above the pace many forecasters were expecting, and a sharp pickup after a disappointing May.

A monthly snapshot from the Labor Department showed unemployment rose slightly, to 3.7%, as more workers entered the job market. 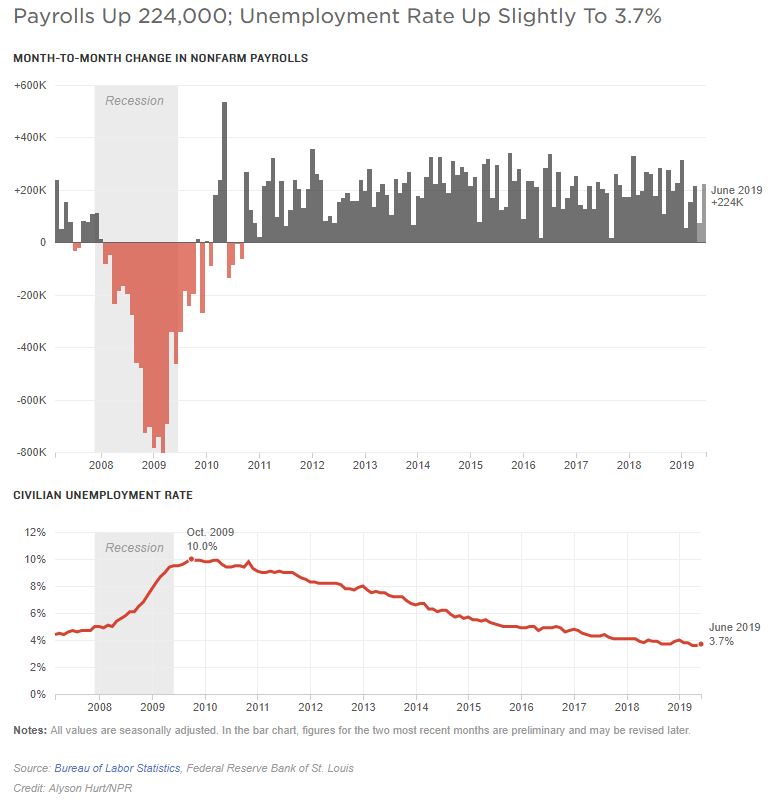 Manufacturing and transportation are especially vulnerable to disruptions from trade battles. Employers added just 3,000 factory jobs in May, while employment in the transportation and warehousing sector shrank.

Friday’s jobs report reflects conditions in the middle of June, after the threat of tariffs on Mexico was lifted, but before President Trump met with Chinese President Xi Jinping last weekend and agreed not to impose tariffs on an additional $300 billion in Chinese imports.

“I think we’re probably in for some stabilization,” said senior economist Sarah House of Wells Fargo Securities, as employers respond to the temporary truce. But she cautioned that the fundamental trade dispute between the U.S. and China has not been resolved.

Health care and business services also saw strong job gains in June, and the government added 33,000 jobs — some of which may be tied to the upcoming census.

Retailers continued to shed jobs, as did auto-makers who have seen a slowdown in vehicle sales.

Surveys released this week showed that trade battles are creating a drag not only on U.S. factories, but also the much larger services sector of the economy. But neither showed signs of actual contraction.

“Even with some of these headwinds, we think overall the economy remains in pretty good shape,” House said, suggesting the decade-old economic expansion still has room to run.

Over the last three months, employers have added an average of 171,000 jobs each month. That’s similar to the pace of hiring in the first three months of the year, but reflects a slowdown from the end of 2018, when monthly job gains averaged 233,000.

Wages have been growing at an annual rate of just over 3%, outpacing inflation, which is less than 2%.

“That’s good for consumer spending,” House said, which is a major pillar of the U.S. economy. “Overall, the labor market still remains pretty tight, even as we’ve seen the pace of jobs downshift.”

Ohio Unemployment Rate Falls From May to June