A Broom For Ma is the charming story of an elderly man who takes the reader through an emotional, endearing journey of crafting a new broom for his wife of many years. Set against the backdrop of the rolling hills of Appalachia, the children’s tale was penned by Glouster’s Rhonda Cable, illustrated by former Nelsonville resident Jackie Duffy, and published earlier this year by Monday Creek Publishing.

WOUB interviewed Rhonda and Curt Cable, which you can read below. Rhonda based the book largely on the work that her husband Curt does as the artisan behind Glouster’s Hollow Handcrafts.

The book will be launched on Saturday, July 13 as a part of Lilyfest 2019. Lilyfest is a three day, entirely free music and craft festival that takes place July 12-14 in Hocking Hill’s picturesque Bishop Educational Gardens (13200 Little Cola Road, Rockbridge, OH). Check out the festival’s schedule, and more, right here. After the launch, the book will be available via Hollow Handcraft’s Etsy page and on Amazon. 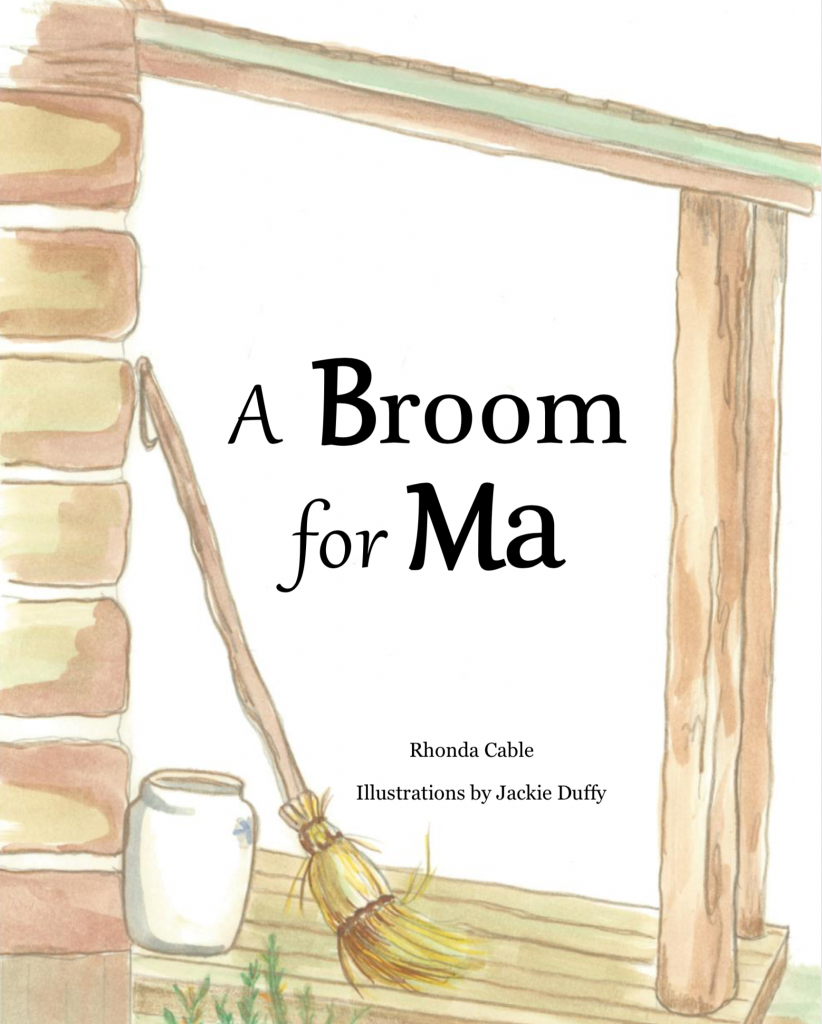 WOUB: You were an elementary educator, so I feel like you instinctually know how to connect to children through the written word and accompanying images. What were some of the things you knew about children from your time as an educator that you tried to incorporate into the book?

Rhonda Cable: I guess just the intelligence of children. The fact that they don’t have to be constantly entertained by “silliness.” They connect with beauty, they love language, they can handle a slower pace better than we think they can. The same is true with the illustrations. I think children will appreciate how the illustrations compliment the story. The hand drawn images, the use of repeating colors, just seem to me like illustrations that would seem accessible to students – like something they might try on their own.

WOUB: Was there a particular person you based Amos on? Or is he an amalgamation of several people?

RC: There is a lot of Curt in the character – broom making obviously, his love of spending time in the woods, his faith, etc. However, since my parents and grandparents were born and raised in West Virginia and I still live in Appalachia, I had lots of men in my life to use as inspiration to help come up with his character — from his clothing, to phrases he might use, to what types of things he might take pride in accomplishing.

WOUB: (to Curt Cable) When and why did you start making brooms?

Curt Cable: We visited Shaker Village in 2001. I enjoyed watching the broom maker there. That’s when I first started thinking  about making brooms. The next fall we  went to Backwoods Fest. There was a broom maker there and I approached him about teaching me — which he did. So, it was probably 2003 when I began making and selling brooms on my own. I just like working with my hands and am intrigued by old craft skills.

WOUB: What are your hopes for “A Broom for Ma”?  How do you hope it impacts the children and adults that are exposed to it?

RC: We hope it answers questions people have about the broom making process Curt uses. We also hope to give a little picture of life in Appalachia as we remember it from our growing up years.

“The second purpose of the book was to highlight some of the qualities both Curt and I love about our Appalachian life and heritage. Woven throughout the story are some nods to the main character’s Appalachian values such as: his faith in God, self reliance, love of place, sense of beauty, contentment and so on.” – author Rhonda Cable on her first book, A Broom For Ma

WOUB: How did you decide on illustrator Jackie Duffy?  What do you like about her style?

RC: When I approached Jackie, we were both teachers in the Logan Hocking School District.  It just made sense to me to work with someone I knew. I had a certain “feeling” I wanted for the book and took along some photos and books I thought captured the feeling. Of course, Jackie is an artist, so she was able to come up with illustrations that were uniquely hers and captured that same feeling in her own way. Her pencil and watercolor illustrations have subtle, earthy colors that are warm and inviting and really capture the Appalachian feel I was after. She actually used Curt as a model and then aged him by about 40 years.

WOUB: The book mostly takes place within Amos’ internal dialogue. How did you come to make that artistic decision about it?

RC: Well, Amos is an older man. He and his wife are living a quiet life on a mountain farm. He is spending the day alone crafting a broom, so it’s just the things I imagined might be running through his head as he worked. Probably he would be a man of very few words, just as Ma is at the end of the book.

WOUB: What else can you tell me about the book, and the upcoming launch at Lilyfest?

This is my first writing project. The idea started when I began to go to craft fairs with my husband, Curt. He makes and markets handmade brooms. As he sold his brooms, I realized  that his customers very often asked the same series of questions about the materials used and the process of making the brooms.  I thought it would be helpful to have these answers in print — something a customer could pick up when a broom was purchased. I taught reading at the elementary level for several years and I also homeschooled our children, so putting the information down in the form of a children’s book was appealing to me.

The second purpose of the book was to highlight some of the qualities both Curt and I love about our Appalachian life and heritage. Woven throughout the story are some nods to the main character’s Appalachian values such as: his faith in God, self reliance, love of place, sense of beauty, contentment and so on.

We chose to launch the book at Lilyfest for a variety of reasons. The Bishop Educational Gardens are a beautiful backdrop, but Lilyfest was also one of the first festivals where Curt sold his brooms. This will be his 15th year anniversary of vending at Lilyfest. He has many repeat customers there. And, since customer questions are what began this entire process, we felt debuting the book at our favorite festival was very fitting. As luck would have it, Jackie (who now lives in California) will be back in Ohio in July and will be at the book launch with us, which is very exciting.