Grantchester is getting a new vicar: MASTERPIECE on PBS has announced that Tom Brittney (Outlander, Call the Midwife) is joining the cast as Reverend Will Davenport – man of the people and crime-solving partner to Robson Green’s Geordie Keating. 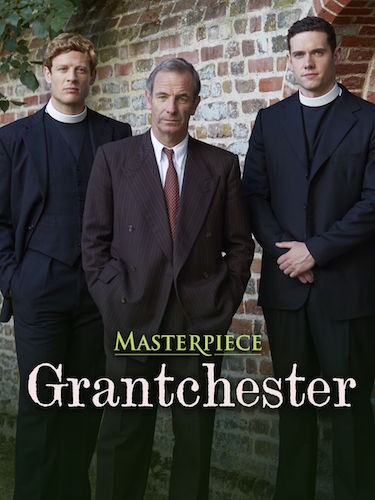 James Norton, who plays Vicar Sidney Chambers in the popular mystery series, will make his final appearance during the fourth season.

“A message to MASTERPIECE fans: “As much as I know you’ll miss James Norton, I PROMISE that you’ll love Tom Brittney,” says MASTERPIECE Executive Producer Rebecca Eaton at WGBH Boston. “Just watch him go toe-to-toe with Robson Green’s character, the very skeptical Geordie … and watch him win him over.”

Tom Brittney said: “I am beyond excited. From the moment I heard about the role of Will Davenport, it was something I wanted more than anything. It’s a real honor to be joining such a wonderful series, with such a loyal fan base.”

James Norton said: “As excited as I am to be filming a new series of Grantchester, it’s also heartbreaking to be saying goodbye to Sidney Chambers. I’ve loved this experience, and particularly working with such an extraordinary cast and crew. All the best to the fantastic Tom Brittney in his role as the new vicar. He is a wonderful addition to the Grantchester family.”

Executive Producer Diederick Santer says: “I’m delighted that Tom is joining the cast. He’s a hugely likeable and talented actor, and will make both a fine Vicar of Grantchester AND a great crime-solving partner for Geordie Keating.”

A man of the people—confident, caring and self-assured—Grantchester’s young new parish priest channels his boundless energy into a quest for social justice. He is a man of God, but with the devil inside of him. As Geordie draws him into righting the wrongs of criminal Cambridge, Will’s own troubled past is unearthed.

In an interview with the award-winning MASTERPIECE Studio podcast, Grantchester creator/writer Daisy Coulam previews the upcoming fourth season of the show. You can hear the conversation here.

Grantchester, Season 4 is a Co-Production of Kudos, an Endemol Shine Company and MASTERPIECE for ITV and is distributed internationally by Endemol Shine International, which have sold the show across 162 countries. The executive producers for Kudos are Diederick Santer, Emma Kingsman-Lloyd, and Daisy Coulam. The executive producer for MASTERPIECE is Rebecca Eaton at WGBH Boston. The series will be produced by Richard Cookson. Director Tim Fywell is returning for the opening two episodes. Adapted from the Grantchester Mysteries novels by James Runcie, the series was developed for television by Daisy Coulam and written by Daisy Coulam and John Jackson.

The top-rated primetime show on PBS, MASTERPIECE celebrated its 45th anniversary in 2016. MASTERPIECE is presented on PBS by WGBH Boston. Funding for MASTERPIECE on PBS is provided by Viking and Farmers Insurance® with additional support from public television viewers and contributors to The MASTERPIECE Trust. MASTERPIECE is known for presenting iconic shows such as Upstairs Downstairs, Prime Suspect, The Forsyte Saga, Poldark, Sherlock, Downton Abbey, and Victoria.

Man in an Orange Shirt | MASTERPIECE | Premieres Sunday, June 17 at 9