“Death Spiral.” How A Carbon Tax Could End Some Coal Towns … Or Fund A New Future

Declining coal tax revenues place coal-reliant counties in Appalachia at risk of fiscal collapse, according to new research from the centrist Brookings Institution and Columbia University. Policies designed to prevent further climate change would accelerate that decline, the report found, but could also provide a new stream of revenue to help communities rebound from coal’s demise.

The report, published by Brookings and the Center on Global Energy Policy at Columbia, quantified how much of a coal-producing county’s budget came from coal, via severance taxes, property taxes, and contracts such as royalties and lease bonuses. Then authors analyzed what it might mean for those county governments if the U.S. instituted a modest price on carbon emissions. The report found that under such a policy, counties that are reliant on coal would be at risk of defaulting on bonds, failing to provide basic services such as waste removal or infrastructure maintenance, and even bankruptcy.

Adele Morris, senior fellow and policy director at the Brookings Institution and one of the report’s co-authors, said the loss of tax revenue from coal producers would have far-reaching consequences.

“You have the workers who are dislocated, you have the loss of property tax and sales tax revenue, people are closing schools and limiting other government services, and then what happens is, people move away,” she said. “And then you get this sort of death spiral.”

The report notes that many coal communities are already experiencing some of these effects without a climate policy in place. Coal employment declined by 50 percent in Appalachia between 2011 and 2016, and according to recent data from the Appalachian Regional Commission, 190 of 420 Appalachian counties are considered distressed or at risk, in no small part due to the downturn in the coal industry.

Morris acknowledged that voters in coal regions would likely always view climate change policies as a threat to their livelihoods. “But a lot of people recognize … that coal is not doing so well right now, even without a climate policy,” Morris said.

She said the report’s findings serve as a call to county and state officials to prioritize economic diversification. “Whether you think climate change is a problem or not, if there’s a significant chance that we’re going to do something about it, then you’ve got to be prepared.”

Morris and her co-authors lay out a scenario in which policy aimed at mitigating climate change could also provide substantial funding for coal-dependent communities to soften the blow and diversify their economies.

Brookings Institution and Columbia economists used data from the U.S. Energy Information Administration to model the implications on the coal industry of common climate change proposals, such as a tax on carbon emissions. Under a tax of $25 per metric ton, which is similar to a policy proposed by presidential candidate Senator Bernie Sanders (I-VT) several years ago, coal production is expected to drop by 77 percent by 2030.

To understand what such a sharp downturn would mean for coal-reliant communities, Morris and her team assessed outcomes in counties that dealt with similar losses from the textile and manufacturing industries. Aliquippa, Pennsylvania, for example, lost over one third of its steel jobs in a single year, 1984. Within three years, the town amassed $400,000 in debt. The local utility threatened to shut off the city’s streetlights over delinquent bills. The state government had to step in to bail out Aliquippa, but the city is still considered “distressed” decades later.

A similar fate may await places like Boone County, West Virginia, which has already faced steep consequences from the coal downturn and would be even further compromised by a carbon tax.

Coal production declined by 70 percent from 2012 to 2017 in the county, translating to a 38 percent decline in revenue flowing to the county government in the same period. 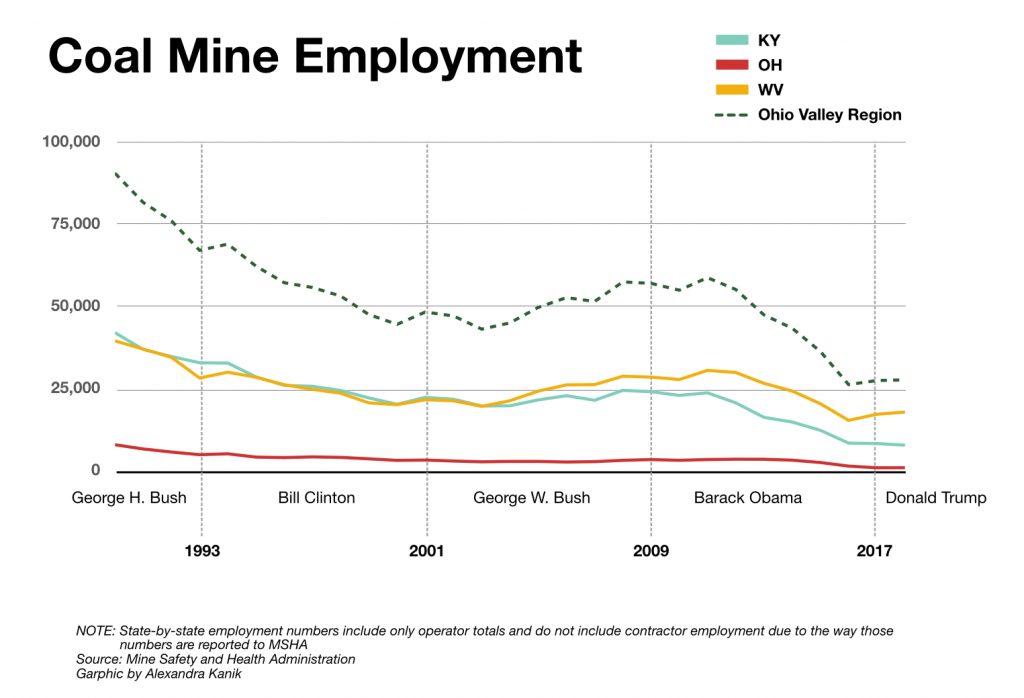 According to the report, revenue declines led to “painful spending cuts.” Boone County in 2015 closed three of its 10 public schools and cut back on its solid waste program.

The reports authors say that rather than promoting alternative economic investment, the West Virginia government has passed legislation to promote new investment from coal by further reducing taxes on some kinds of mining, despite a dark outlook for the industry under any scenario.

The report’s authors write that “while some politicians in coal-reliant areas may claim to have a path to bringing coal back, such bluster is irresponsible given the robust negative projections for the industry.”

Morris urged lawmakers to recognize the likelihood of coal’s continued decline. “You can’t just be weaving stories about how coal is coming back,” she said. “It’s doing a disservice to the people you represent, and wishful thinking, the time for that is over.”

Governments use bonds to finance infrastructure improvements and other projects, and nationwide, state and local issuers have about a million outstanding securities, with $3.8 trillion in outstanding debt.

Morris said economists have begun to worry that climate-related threats could destabilize the municipal bond industry, which has historically been a safe investment category. But bond issuers do not adequately understand or document the risks associated with climate change or climate change policy to investors.

“These bonds will be maturing in a time frame where we very well might have some kind of price on carbon or some kind of other greenhouse gas regulation, and you have to recognize that there’s this policy scenario that could be quite detrimental to the risks associated with these bonds,” she said.

Policy proposals currently in place or under consideration that aim to support economic development projects in Appalachian coal country include the POWER grants from the ARC and pending legislation known as the RECLAIM Act, which would dedicate more federal funds to mine cleanup and economic development. But Morris said such proposals were “small potatoes” compared to the scale of the challenges communities face.

Morris said that although a carbon tax could spell the end of many coal-reliant communities, it could also point them in the direction of a new future. A $25 per ton carbon tax would likely raise a trillion dollars in revenue over 10 years, she said, “And that kind of revenue allows for a very generous support for coal-reliant areas. That could bring in tens of billions of dollars per year … to buffer the impact on governments.”

Capito Would Set Aside Tax Credits For Hard-Hit Coal Towns