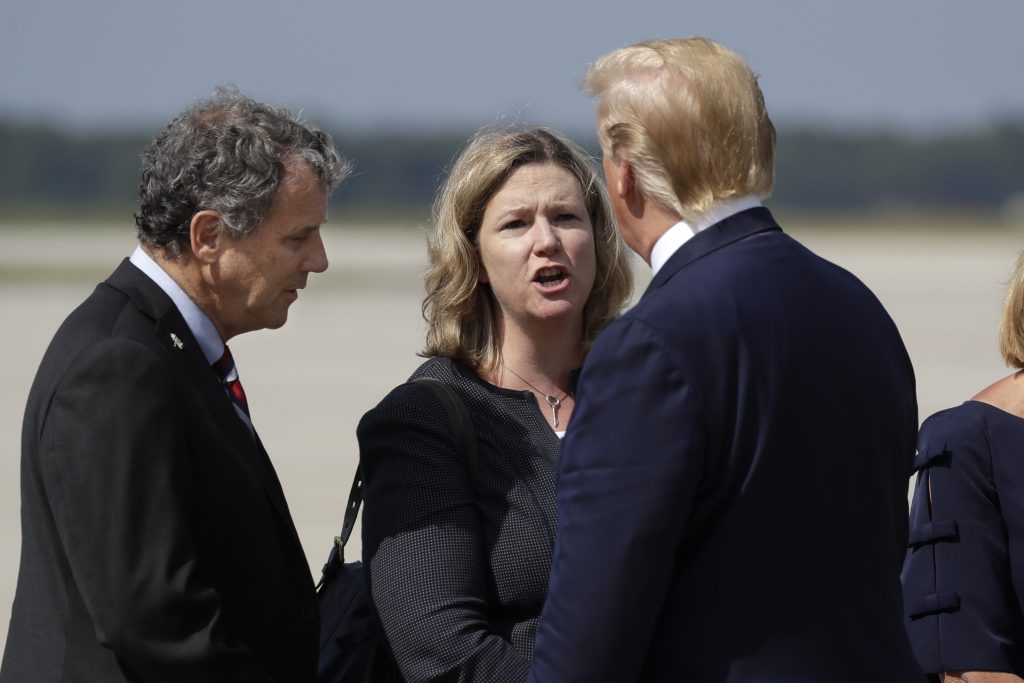 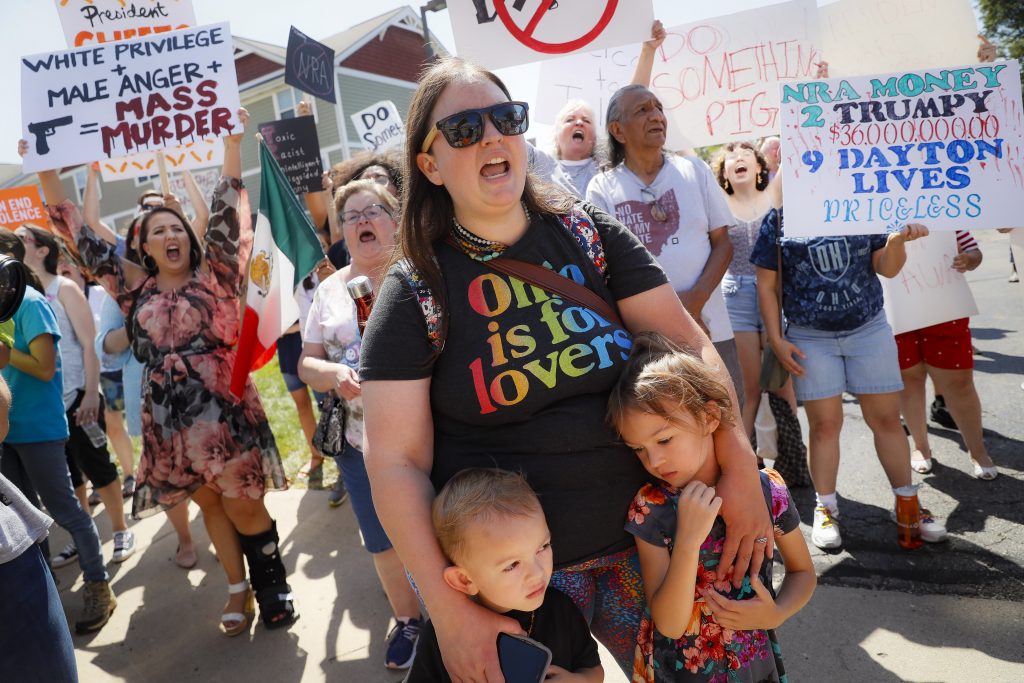 Demonstrators chant as they protest the arrival of President Donald Trump outside Miami Valley Hospital after a mass shooting that occurred in the Oregon District early Sunday morning, Wednesday, Aug. 7, 2019, in Dayton. (AP Photo | John Minchillo) 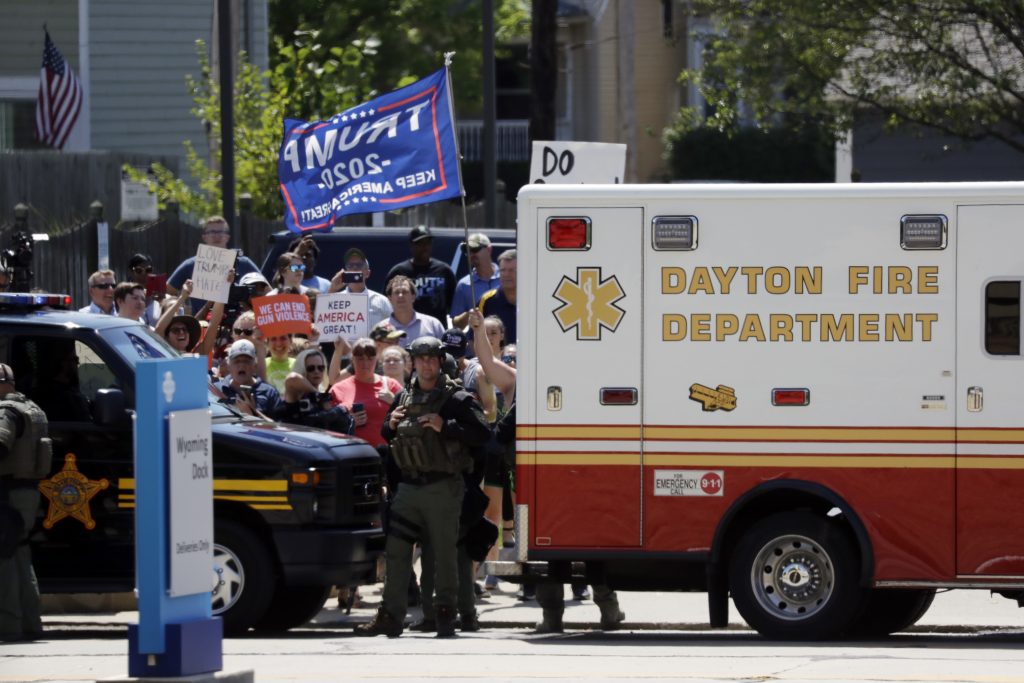 A group of people stand outside the Miami Valley Hospital, as President Donald Trump and first lady Melania Trump are inside, Wednesday, August 7, 2019 in Dayton, Ohio. (AP Photo | Evan Vucci)

Damon Smith presents a message to President Donald Trump beside a makeshift memorial for the slain and injured victims of a mass shooting that occurred in the Oregon District on Aug. 7, 2019, in Dayton, Ohio. Twenty-four-year-old Connor Betts opened fire in Dayton early Sunday, killing several people including his sister, before officers fatally shot him. (AP Photo | John Minchillo)

Protesters Chant for Action on Guns as Trump Visits Dayton

The president and first lady Melania Trump began their visit at the hospital where many of the victims of Sunday’s attack were treated. Reporters traveling with the president were kept out of view, but White House Press Secretary Stephanie Grisham tweeted that the couple had “been stopping between rooms to thank the hardworking medical staff. Very powerful moments for all!”

Outside Miami Valley Hospital, at least 200 protesters gathered, hoping to send a message to the president by calling for action. Some said Trump was not welcome in their city. There were Trump supporters, as well.

Emotions are still raw in the aftermath of the early Sunday morning shooting rampage that left 10 dead, including the gunman, in the city’s popular Oregon entertainment district. Critics contend Trump’s own words have contributed to a combustible climate that has spawned violence in cities including El Paso, Texas, where another shooter killed 22 people over the weekend.

Trump rejected that assertion as he left the White House, strongly criticizing those who say he bears some responsibility for the nation’s divisions.

“My critics are political people,” Trump said, noting the apparent political leanings of the shooter in the Dayton killings and suggesting the man was supportive of Democrats.

“Had nothing to do with President Trump,” Trump said. “So these are people that are looking for political gain.”

He also defended his rhetoric on issues including immigration, claiming instead that he “brings people together. Our country is doing incredibly well.”

Some 85% of U.S. adults believe the tone and nature of political debate has become more negative, with a majority saying Trump has changed things for the worse, according to recent Pew Research Center polling.

And more than three quarters, 78%, say that elected officials who use heated or aggressive language to talk about certain people or groups make violence against those people more likely.

In Dayton, raw anger and pain were on display as protesters chanted “Ban those guns” and “Do something!” during Trump’s visit. This White House typically goes out of its way to shield protesters from Trump’s view.

Holding a sign that said “Not Welcome Here,” Lynnell Graham said she thinks Trump’s response to the shootings has been insincere.

Dorothee Bouquet, stood in the bright sun with her 5-year-old daughter and 2-year-old son, tucked in a stroller. She told them they were going to a protest “to tell grownups to make better rules.”

But in El Paso, where more protests were expected, Raul Melendez, whose father-in-law, David Johnson, was killed in Saturday’s shooting, said the most appropriate thing Trump could do was to meet with relatives of the victims.

“It shows that he actually cares, if he talks to individual families,” said Melendez, who credits Johnson with helping his 9-year-old daughter survive the attack by pushing her under a counter. Melendez, an Army veteran and the son of Mexican immigrants, said he holds only the shooter responsible for the attack.

“That person had the intent to hurt people, he already had it,” he said. “No one’s words would have triggered that.”

“I think the victims and the first responders were grateful that the president of the United States came to Dayton,” added Mayor Nan Whaley, who said she felt it was probably good Trump did not visit the site of the shooting.

“A lot of the time his talk can be very divisive, and that’s the last thing we need in Dayton,” she said.

Visits to the cities of mass shootings have become a regular pilgrimage for recent presidents including Trump. Yet he has not excelled at projecting empathy in public, often mixing what can sound like perfunctory expressions of grief with awkward offhand remarks. While he has offered hugs to tornado victims and spent time at the bedsides of shooting victims, he has yet to project the kind of emotion and vulnerability of his recent predecessors.

Barack Obama grew visibly shaken as he addressed the nation in the wake of the Sandy Hook elementary school massacre and teared up while delivering a 2016 speech on new gun control efforts. George W. Bush helped bring the country together following the Sept. 11 attacks, notably standing atop the smoking rubble of the World Trade Center, his arm draped over the shoulder of a firefighter, as he shouted through a bullhorn.

Trump, too, has been able to summon soothing words. But then he often quickly lapses into divisive tweets and statements — just recently painting immigrants as “invaders,” suggesting four Democratic congresswoman of color should “go back” to their home countries even though they’re U.S. citizens and deriding majority-black Baltimore as a rat-infested hell-hole.

Even on the eve of his trip, Trump was lashing out at a potential 2020 rival, former Rep. Beto O’Rourke, who had tweeted that Trump “helped create the hatred that made Saturday’s tragedy possible” and “should not come to El Paso.”

O’Rourke “should respect the victims & law enforcement – & be quiet!” Trump snapped back on Twitter.

Trump said before leaving Washington that Congress was making progress on possible new gun legislation. He said he has had “plenty of talks” with lawmakers in recent days and that there is a “great appetite to do something with regard to making sure that mentally unstable, seriously ill people aren’t carrying guns.” He argued there is no such appetite for banning assault-style rifles and large-capacity ammunition magazines.

But passage of a pending background check bill in the Senate remains unlikely. Support for a bipartisan measure reached a high-point with a 2013 vote after the Sandy Hook shooting but it fell short of the 60 votes needed to advance.

This White House also has invited internet and technology companies to a roundtable discussion on online extremism Friday. Trump is not expected to attend.

With Focus On Guns, Trump Warns Conservatives Not To Be ‘Complacent’ In 2018

After ‘Send Her Back!’ Chant, Ohio Rally a Test for Trump