The Federal Reserve is widely expected to cut interest rates Wednesday for only the second time since the Great Recession, but analysts say the move may not be enough to offset the economic damage caused by the trade war with China.

Financial markets will be watching for an anticipated quarter-percentage-point cut — and listening for what Federal Reserve Chairman Jerome Powell has to say about it.

“Powell just has to be very clear that [the Fed is] going to do whatever it takes to sustain the expansion,” said Kathy Bostjancic, chief U.S. financial economist at Oxford Economics.

Powell has already been trying to send that message.

“Uncertainty around trade policy is causing some companies to hold back now on investment,” he told an audience in Switzerland this month. “So our obligation is to use our tools to support the economy, and that’s what we’ll continue to do.” 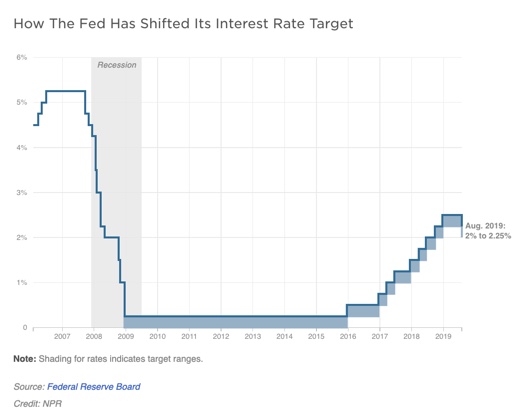 Powell and his colleagues also pointed to trade uncertainty back in July, when they cut interest rates for the first time in more than a decade. The stock market wasn’t satisfied at the time, in part because Powell seemed to suggest it might be the last rate cut for a while.

Since then, economic indicators have worsened, Bostjancic said. She hopes for not only an additional rate cut Wednesday but also a signal about more cuts in the future.

“It will be clear it’s not one and done,” Bostjancic said, if the Fed cuts rates for the second time in seven weeks. “But [Powell] has to be careful that it’s not two and done.”

Bostjancic is predicting two additional rate cuts, in October and December, for a total of four this year. But even with that extra push from the Fed, she thinks economic growth will slow next year to just 1.6%. The economy grew at a 2% rate in the second quarter of 2019.

The trade war is not the only economic speed bump. Growth is also slowing in other countries. The effects of the 2017 tax cut are dwindling. And there’s growing uncertainty about oil prices after the attack over the weekend in Saudi Arabia.

Nervous about a slowing economy, President Trump has been browbeating the Fed to cut interest rates aggressively, to zero or even lower. Others, including former New York Fed President Bill Dudley, have argued that the central bank should stand pat and let Trump feel the political fallout from the trade war he started.

“Political factors play absolutely no role in our process,” Powell insisted in Switzerland. “My colleagues and I would not tolerate any attempt to include them.”

The stock market is counting on a rate cut Wednesday and will likely suffer a sell-off if Powell and his colleagues don’t deliver. But it’s not clear that lower interest rates will do much to help the nation’s struggling factories.

“We see the driving force of the slowdown certainly in manufacturing as trade uncertainty,” said Matthew Luzzetti, chief U.S. economist at Deutsche Bank. “Cutting the fed funds rate is not going to be able to fully alleviate that uncertainty.”

Factories and others have cut back on investment not because it’s too expensive to borrow money but because they’re not sure they can sell their products. In that environment, Luzzetti said, cutting interest rates can do only so much.

“I think it will help prop up confidence. It will help financial conditions. But it’s going to be difficult to fully offset those effects,” he said.

“Lower interest rates would be like pushing on a string,” he said.

What would help is an end to the trade war. And in recent days there have been signs of a possible thaw in trade relations between the U.S. and China. Trump delayed raising tariffs on Chinese imports by two weeks, and China waived some tariffs on U.S. farm products. Still, it’s not clear a wider trade truce is imminent.

“Right now that’s all talk,” Bostjancic said. “We have seen that before. We’ve seen encouraging talk. And then both the markets and business leaders and consumers — everyone — ends up being disappointed. Because not only is there no trade truce. It actually ends up being ratcheted higher.”