Bobby Bowman mined coal in West Virginia for 12 years before his employer shut down.

“I don’t think that mine will ever open again,” he said.

Bowman lives in Welch, in the south of the state, where he worked at the Pinnacle Mine, which shut down almost exactly one year ago, putting him and about 400 others out of work. After waiting a month in hopes someone would buy Pinnacle and the mine would reopen, Bowman decided to do a four-week training program offered by the United Mine Workers Career Center. He enjoyed it and earned a certification in heavy equipment operation. But when he came back home, he struggled to find a job in the field. So Bowman took matters into his own hands.

“So I sent myself through truck driving school and that’s what I’m doing today,” he said.

Bowman is not alone. In the midst of the region’s declining industries, politicians are betting big on job training, with millions directed at those who lost jobs in coal mining and power plants.

The U.S. Department of Labor recently announced nearly $5 million for worker training programs in Appalachia. It’s the latest influx of funding aimed at blunting the job losses in the region’s coal sector.

But critics say worker training alone is no solution and that such retraining programs have a poor record in actually connecting dislocated workers with local employment that pays a comparative wage.

“There are great examples of ones here in Appalachia who have trained people for jobs then they couldn’t find employment,” Ted Boettner said. The executive director of the left-leaning West Virginia Center on Budget and Policy, Boettner said job training hasn’t made up for the number of jobs lost by the coal industry. He and other economists argue that a more broad-based approach to jobs, public investment, and wages will be necessary for coal country.

“You have to realize a lot of this is in the backdrop of 40 years of wage stagnation across this country and especially men in West Virginia,” Boettner said.

He said job training needs to be connected to employment that pays well because it’s difficult to go from a $75,000 a year coal mining job to one that pays $12 or $15 an hour. Boettner points to areas of opportunity, such as Appalachia’s needs for mine reclamation work which could also provide jobs for coal miners similar to the work they’ve already done.

“We have $4 to $5 billion in mine site reclamation that needs to happen,” he said. “That’s enough jobs, that’s thousands of jobs, and billions of dollars of investment right there.”

Josh Benton is deputy secretary of the Education and Workforce Development Cabinet in Kentucky, where miners have been hurt by recent coal bankruptcies. Benton said the state has had some success retraining people to work in the healthcare industry. But the real challenge is finding jobs where that displaced worker lives.

“The challenge that we face is not necessarily are the training programs effective? It is, are there other industries, for those displaced workers to go to work,” he said.

Benton said the jobs that have been created in technology or healthcare don’t make up for the ones lost in the energy sector over the last 10 years. Wages are another concern. He said it’s a tight labor market and he tries to communicate that to employers who are looking for skilled workers, but offering low wages.

“If a manufacturer, for example, is paying an entry-level wage of $11.50 an hour, you know, if we’re aware of that, we can say that the average entry-level wage for manufacturing across the state is really $14 an hour,” he said. “So, it’s not surprising that you’re struggling to find someone because you’re paying below market value.” 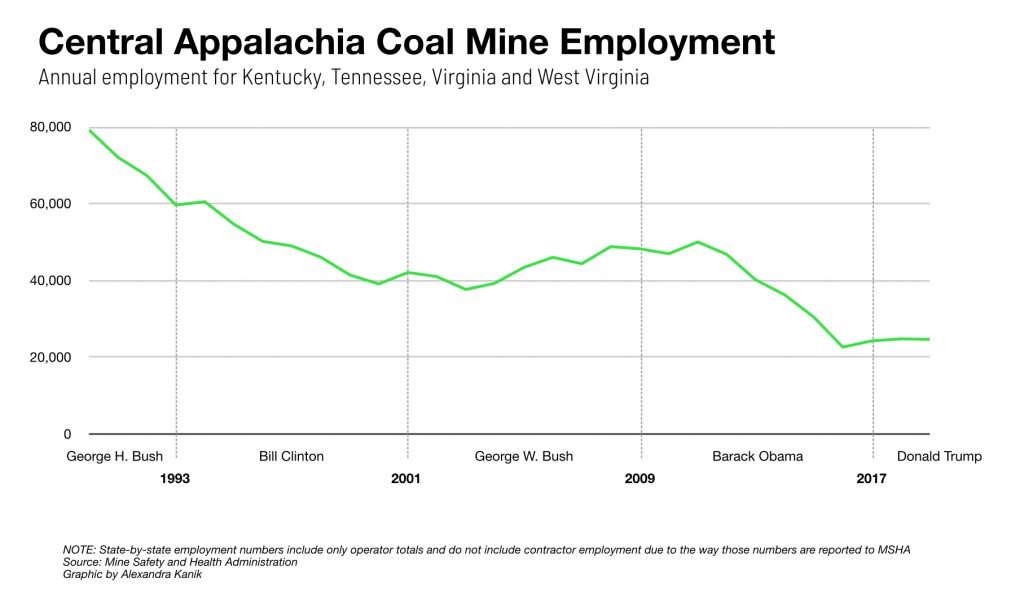 Gordon Lafer is a professor at the University of Oregon, a research associate at the Economic Policy Institute, and author of “The Job Training Charade.” Lafer argues that job training pushes a false narrative that employers aren’t hiring people because they can’t find workers with the right skills.

“I think that job training keeps being promoted because it solves a political problem both for elected officials and for employers, but it doesn’t do anything for the economics,” he said.

Lafer said the most important thing to understand about job training programs is that they don’t create new jobs. However, he argues, those programs do create a convenient narrative for politicians on both sides of the aisle.

“Job training is one of the favorite things of both Democrats and Republicans because it’s cheap, it’s symbolic,” he said. “It kind of places the blame on workers instead of employers because it suggests only if you had the right skills or the right work ethic or something then you wouldn’t be in the trouble you’re in.”

Lafer said the employment picture in the Ohio Valley is especially important because of its connection to climate change. He said talk of a “Green New Deal” and a move away from polluting industries should include a just transition for those who would lose jobs.

“It’s just not in good faith to say, one group of people is going to pay the price for saving the planet,” he said. “Either we have to say, we’re going to take care of people from age, whatever they are when they lose their jobs to when they would retire. Or there have to be other jobs that are real jobs.”

Lafer said he’s heard this public policy touted as a solution for years, but it isn’t creating employment opportunities as advertised.

“You could take on every argument, bring all the statistics and show why it doesn’t make sense. As a policy, job training feels like the undead to me,” he said. “Like you can drive a stake through its heart and it keeps coming back up.”

Lafer said a better approach is to train people and invest in the industries that can’t move to a different country with cheaper labor once they get to a scale where they need more employees. Some of those industries include healthcare, construction, education, and tourism.

Economist Ted Boettner said public investments in infrastructure, including expanded broadband, could help create a stable economy that works for everyone.

“Have we upgraded our antiquated grid? That’s thousands and thousands of jobs in West Virginia if we just upgrade the grid,” he said.

As automation continues to grow, and the coal industry declines, more people will be displaced. The challenge is training those workers for jobs that pay well and aren’t likely to be outsourced or automated.