Click here for additional educational resources that align with the programming for Monday, May 25th. #LearnAtHome

Decade of Fire Premieres on Independent Lens Monday, November 4, 2019 on PBS and PBS.org

Discover Why the Bronx Burned in the 1970s and Meet Those who Chose to Resist, Remain and Rebuild 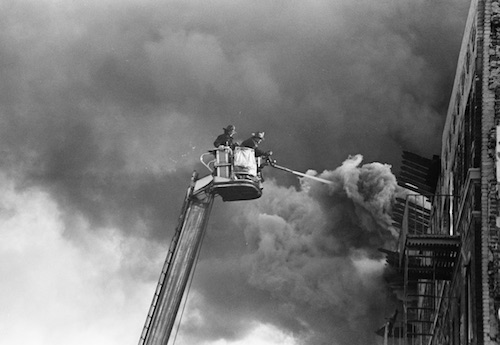 In the 1970s, the Bronx was on fire. Left unprotected by the city government, nearly a quarter-million people were displaced as their close-knit, multiethnic neighborhood burned to the ground, reducing the community to rubble. While insidious government policies caused the devastation, it was the African American and Latino residents who bore the blame. Through rich archival and home movie footage, testimonials from retired FDNY firefighters and brass, as well as Bronx historians and community organizers, Decade of Fire reveals the real reasons for the devastation and shows what can happen when a community chooses to fight back and reclaim their neighborhood. A film by Vivian Vázquez Irizarry, Gretchen Hildebran and Julia Steele Allen, Decade of Fire premieres on Monday, November 4, 2019, 10:00-11:00 PM on PBS, PBS.org and the PBS Video App.

Co-directed by Bronx native Vázquez Irizarry, who serves as the film’s central character, Decade of Fire confronts the racially charged stereotypes that dehumanized residents of the South Bronx in the 1970s and rationalized their abandonment by city, state and federal governments. Says Vivian, “Growing up in the South Bronx, I often heard that we were the reason our neighborhoods turned to rubble and ruin. After years of seeing outsiders lay claim to our stories, I needed to tell my own.”

In Decade of Fire, Vivian speaks to neighbors and historians and digs into city archives, uncovering evidence of years of political policies that led to the devastation, beginning with “redlining” in the 1930s – a policy in which any Black and/or Puerto Rican neighborhood was classified as “declining,” leading banks and insurance companies to step away from investing and insuring. Slum clearance projects in Manhattan flooded the borough with displaced tenants, over-filling the Bronx’s already decaying housing stock. While many of the Bronx’s long-time Irish, Italian and Jewish residents fled to the suburbs, Blacks and Puerto Ricans were often denied mortgages. Many landlords sold their buildings to speculators who found it more lucrative to burn them for the insurance than maintain them. The city’s financial crisis of the 1970s was the final straw, leading to the closing of a third of the city’s fire companies, primarily in the neighborhoods that needed them most.

By 1977, the Bronx had become the national poster child for urban decay, with images of burning neighborhoods flashed across TV screens as the Yankees played the World Series nearby. But slowly, out of the devastation, a wave of community activism arose in the Bronx, and grassroots organizations began reclaiming the area, building by building, block by block. As Vivian says, “Community organizing is what finally stopped the fires.” A 4.4 billion-dollar city-funded program to rehabilitate 100,000 housing units followed, and the early grassroots development organizations finally had the resources to begin massive rebuilding.

But challenges still continue today as speculators look to the borough as the possible next step in the widespread gentrification of New York City. For Vivian and her neighbors, and for people nationwide struggling to hold on to their communities, the fight to resist and remain continues.

“Vivian, Gretchen and Julia’s first feature is ultimately a story of resistance and resilience in a community torn apart by abusive real estate developers and indifferent authorities,” said Lois Vossen, Independent Lens Executive Producer. “Drawing on Vivian’s personal experience growing up in the South Bronx in the 1970s, the filmmakers weave together archival footage, news reel, and evocative home movies to tell the empowering story of how a community came together and against the odds reclaimed and rebuilt their neighborhoods.”

Visit the Decade of Fire page on Independent Lens, which features more information about the film.

About the Major Participants

Mike Amadeo is a legendary musician whose music store, Casa Amadeo, has been on Prospect Avenue for over 50 years, surviving fires, floods and abandonment.

Harry DiRienzo is a resident organizer who, with Robert Foster, co-founded the Banana Kelly Community Improvement Association, which rescued three buildings on Kelly Street and began a movement that would change Bronx history.

John Finucane grew up in the South Bronx, moved away as a teenager, but returned in the late 1960s as a firefighter.

Joe Flood is author of The Fires.

Hetty Fox grew up in the Bronx and has practiced “block defense,” protecting her childhood home against fires and city demolition crews.

Evelyn Gonzalez is a historian and author of The Bronx.

Vivian Vázquez Irizarry (Co-Director/Producer) has run educational, GED completion and college access programs for youth across New York City for decades. She is currently the director of community-school partnerships at the New Settlement Community Campus in the Bronx. A former member of the National Congress for Puerto Rican Rights, she belongs to 52 People for Progress, a community organization that saved her childhood playground and revitalized the South Bronx for the last 35 years.

Gretchen Hildebran (Co-Director/Producer/Editor) is a documentary filmmaker and editor whose credits include Worth Saving (2004), which was presented in HBO’s Frame by Frame showcase, and Out in the Heartland (2005), which explored anti-gay legislation in Kentucky. A 2005 graduate of Stanford’s documentary program, Gretchen shot Ramona Diaz’s The Learning (2011) and has edited for the History Channel, PBS and the United Nations Development Programme, as well as independent documentaries. She also made a series of short documentaries used to educate communities across the country about life-saving interventions such as needle exchange and overdose prevention.

Julia Steele Allen (Producer/Impact Producer) is an award-winning multidisciplinary artist and a community organizer from New York City. She worked for many years as a community organizer on educational justice campaigns in District 9 in the South Bronx. Since 2014 she has been touring her play, Mariposa & The Saint: From Solitary Confinement, A Play Through Letters, performing for judges, wardens, legislators and community members across ten states, as part of the growing movement to end solitary confinement in the nation’s prisons. She is the Co-Chair of CASA (Community Action for Safe Apartments) Solidarity Board, a Bronx tenant’s rights and housing justice organization.