Murray Energy Corp., the largest underground coal mining company in America with a substantial footprint across the Ohio Valley, has filed for bankruptcy protection.

“Although a bankruptcy filing is not an easy decision, it became necessary to access liquidity and best position Murray Energy and its affiliates for the future of our employees and customers and our long term success,” company founder Robert Murray said in a release.

According to the release, the company filed first day motions with the bankruptcy court Tuesday and expects to be able to continue day-to-day operations uninterrupted. The company says it will finance its operations throughout Chapter 11 with cash on hand and access to a $350 million new money debtor-in-possession financing facility, subject to court approval.

CEO Robert Murray, who founded the business in 1988, is stepping down. According to the release, a new entity, called Murray NewCo, will serve as a “stalking horse bidder” to acquire most of the company’s assets. If approved by the court, the company expects all of its debt to be eliminated and Murray to be named Chairman of the Board of Murray NewCo.

The company turned to bankruptcy after it failed to make payments to lenders. Murray Energy prided itself on producing low-cost bituminous coal at mines located close to its customers — largely coal-fired power plants. But as coal generators close, that has posed challenges for the company’s bottom line.

Despite promises by President Donald Trump to revive the U.S. coal industry, demand for coal has fallen to its lowest level in 40 years, according to the EIA.

According to data by the U.S. Energy Information Administration, in 2018, Murray Energy was the fourth-largest coal producer in the U.S., producing more than 46,000 short tons of coal.

According to its website, the company employs nearly 7,000 people at its U.S. operations and at mines in Colombia.

The company’s chief executive, Bob Murray, has enjoyed a close relationship with the Trump administration. Murray has often appeared with the president during his appearances in West Virginia. In July, he hosted a private fundraiser for Trump in Wheeling, West Virginia.

In February, Trump took to Twitter to urge the Tennessee Valley Authority to not shutter the Paradise Fossil Plant in Kentucky, which is largely supplied by Murray mines.

A vocal Trump supporter, Murray donated $300,000 to the president’s inauguration. Weeks later, the coal executive shared a detailed “action plan” with administration officials that outlined a series of environmental rollbacks and policy changes that would benefit the U.S. coal industry.

The majority of Murray’s wish list — which included the repeal and replacement of the Obama-era Clean Power Plan, withdrawal from the Paris climate agreement, and staff cuts at the U.S. Environmental Protection Agency — have been carried out by the Trump administration.

However, the White House has been unable to fulfill one of Murrary’s chief requests — to bailout struggling coal-fired power plants.

In 2017, FERC unanimously rejected a proposal by the Energy Department to subsidize coal and nuclear plants. Additional efforts — largely driven by the Department of Energy — have stalled.

Speaking last week at the EnVision Forum at the University of Kentucky Center, Murray told the crowd continued inaction by federal regulators, including the Federal Energy Regulatory Commission, or FERC, has resulted “in the destruction of America’s coal industry, the reliability and resilience of the electric power grid, and the cost of electricity itself.”

The country’s largest regional grid operator, PJM Interconnection, which operates across a 13-state region including the Ohio Valley, has argued there is no need for federal intervention. 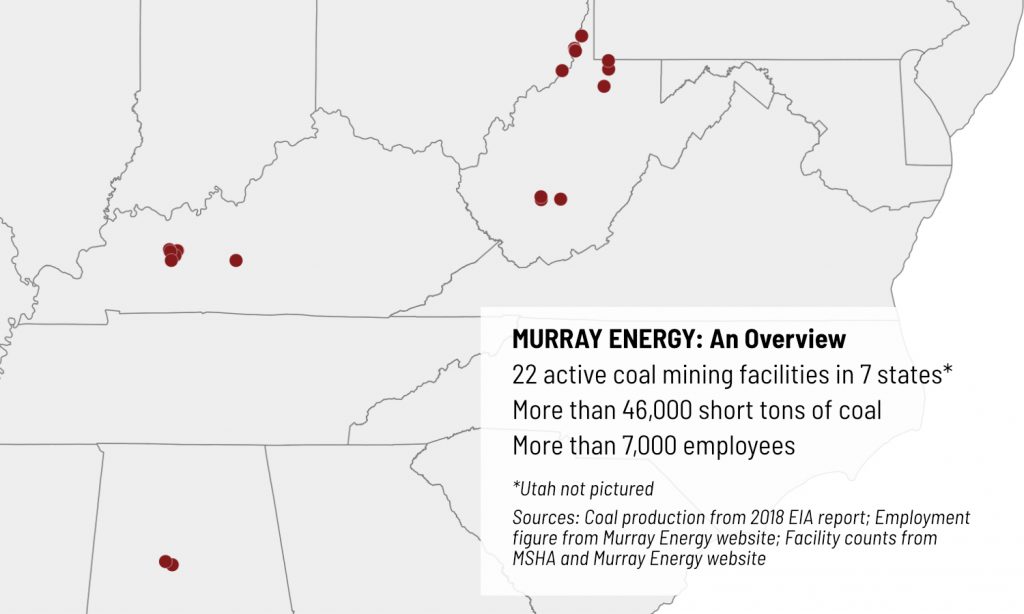 “Nothing has been done by FERC or anyone to save the American coal industry from extinction, and we are virtually extinct,” he said.

Murray Energy’s bankruptcy could have far-reaching impacts on the company’s workers. According to United Mine Workers of American Spokesperson Phil Smith, Murray Energy is the last major company contributing to the UMWA’s pension plan, and is likely to accelerate the plan’s fast decline into insolvency.

In August 2007, nine miners and rescuers died after the Murray-owned Crandall Canyon mine in Utah collapsed. The Labor Department fined the company $1.85 million for violating federal mine safety law. In 2012, the agency settled with Murray for a reduced amount. The settlement included acknowledgement by Murray Energy for its “responsibility for the failures that led to the tragedy.”

Murray later told NPR “this settlement is not an admission of any contribution to the August 2007 accidents.”

Murray was also sued by the Department of Labor, after miners complained the CEO personally told workers in a 2014 meeting to stop making complaints to federal regulators. Under federal law, miners have the right to speak anonymously to government inspectors. Earlier this year, Murray lost an appeal in the case. The court upheld a decision that Murray must personally apologize.