“We’ve made the decision to stop all political advertising on Twitter globally. We believe political message reach should be earned, not bought,” Dorsey tweeted late Wednesday afternoon.

He explained his reasons in a long thread of tweets.

“A political message earns reach when people decide to follow an account or retweet,” Dorsey wrote. “Paying for reach removes that decision, forcing highly optimized and targeted political messages on people. We believe this decision should not be compromised by money.

“While internet advertising is incredibly powerful and very effective for commercial advertisers, that power brings significant risks to politics, where it can be used to influence votes to affect the lives of millions.”

In an apparent jab at Facebook CEO Mark Zuckerberg, Dorsey tweeted, with a wink emoji: “it’s not credible for us to say: ‘We’re working hard to stop people from gaming our systems to spread misleading info, buuut if someone pays us to target and force people to see their political ad…well…they can say whatever they want!’ ”

Dorsey was referring to Zuckerberg’s decision not to block political speech on Facebook, even if it contains misleading statements.

“Our policy is that we do not fact-check politicians’ speech, and the reason for that is that we believe that in a democracy, it is important that people can see for themselves what politicians are saying,” Zuckerberg told a U.S. House committee last week.

This afternoon, Zuckerberg again defended Facebook’s policy on not checking politicians’ ads during a conference call about the company’s financial performance.

“We need to be careful about adopting more and more rules that restrict the way people can speak and what they can say,” Zuckerberg said.

But critics, including several Facebook employees, say the policy gives politicians free rein to lie and makes it easy to spread those lies.

Facebook workers posted an open letter with 250 signatures to the company’s internal message board, urging Facebook to hold political ads to the same standards as other ads, including being fact-checked.

President Trump’s political campaign criticized Twitter’s move, saying the company is turning its back on a lot of money.

“This is yet another attempt to silence conservatives, since Twitter knows President Trump has the most sophisticated online program ever known,” said Brad Parscale, Trump’s political campaign manager. 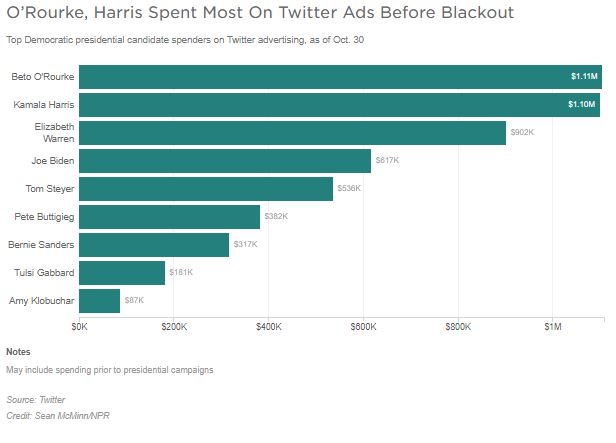 While all the major Democratic candidates have spent money on Twitter advertising, two have cleared the $1 million mark, according to figures provided by the company

Former Texas Rep. Beto O’Rourke and California Sen. Kamala Harris have each spent $1.1 million with Twitter. Their campaigns did not immediately return requests for comment on how Twitter’s decision could affect their strategy.

Mark Zuckerberg Offers A Choice: The Facebook Way Or The China Way