ATHENS, OH – Children from around the area got a chance to experience a new PBS Kids series both on screen and in real life. WOUB Public Media’s Learning Lab hosted a special screening of the series Xavier Riddle and the Secret Museum during the monthly Family Art Encounters event at the Kennedy Museum of Art in Athens this past weekend. Xavier Riddle introduces kids to inspiring historical figures and the character virtues that helped them succeed. About 60 people participated in the screening event which allowed children to watch a preview of the program and go on a scavenger hunt through the Kennedy Museum to learn about several important people. Participants followed a map to find information about historical figures located throughout the museum and used inspiration and materials gathered at every stop to create a book about themselves.

Based on the children’s book series Ordinary People Change the World by New York Times bestselling author Brad Meltzer and illustrator Christopher Eliopoulos, the Xavier Riddle series follows the adventures of Xavier Riddle, his sister Yadina and their friend Brad. In each episode, the three face a problem and must turn to the Secret Museum to help them solve it. The Secret Museum allows the three friends to travel back in time to meet real-life historical figures when they were children. 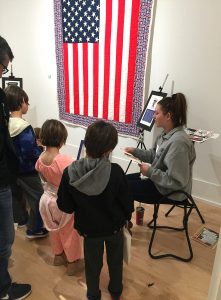 Sergio Ulloa of Athens brought his three grandchildren, Enrique, age 9, Jabier, age 8, and Dani, age 7, to the event. The three enjoyed learning about Martin Luther King, Jr. They discovered MLK’s relationship with his daughter and how it influenced him to work harder to make a difference. All three were also inspired by King’s I Have a Dream speech.

“To be that brave and stand up to a ton of people and say that speech,” said Jabier. “That’s really great.”

There were about 20 stops throughout the museum. Children could find tables with information on other famous people including Helen Keller, Amelia Earhart and George Washington Carver. At the Carver table, children learned that Carver was a former slave who is credited with about 300 inventions involving peanuts. However, they also learned that Carver is not credited with developing the most famous peanut invention – peanut butter.

“Learning about important people in history in a fun, childlike way is what the Xavier Riddle program is all about,” said WOUB Educational Services Manager Deborah Brewer. “We are so thankful for the opportunity to partner with the Kennedy Museum and bring the program to life like this for children in the region.” 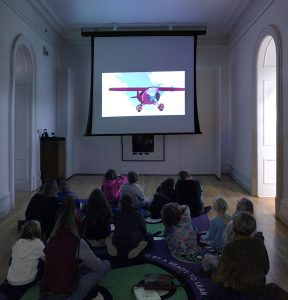 “Partnering with the WOUB Public Media Learning Lab introduced our community not only to the new series Xavier Riddle and the Secret Museum, it also introduced many new visitors to the Kennedy Museum of Art and the OHIO Museum Complex,” said Kennedy Museum of Art Curator of Education Sally Delgado. “Our programming focuses on cultivating connections across discipline areas and this family event collaboration was an astounding example of teamwork in doing exactly that. Participating student staff from the Kennedy Museum of Art and WOUB, as well as volunteers from the OHIO Museum Complex, engaged with the community as they shared their own expertise in the arts, sciences, and education.”

Using the trusted and valued educational resources of WOUB Public Media and PBS, the WOUB Learning Lab empowers teachers, students, parents and caregivers to use 21st century learning tools and media proven to impact student success. Through professional development, classroom integration of educational technology, promotion of WOUB children’s programming and PBS Learning Media and supporting parents and families in the education of their children, the WOUB Learning Lab is a go-to resource for high-quality educational advancement support.