Brick Life Entertainment Brings the Party Back to Athens

Only four years in the making, Brick Life Entertainment has become the go-to company for parties and event planning in Athens, Ohio.

Founded by then Ohio University sophomores Bobby Booshay, Scott Kutil and freshmen Kevin Pan and Chad Goldberg, Brick Life stemmed from one house party and the idea of becoming something bigger than themselves. While Booshay and Goldberg were making names for themselves as DJs, Kutil knew the inner-workings of event planning and Pan was a wiz at the photography.

“[Booshay and Kutil] kind of wanted to be more than just a DJ and a dude that could plan events,” Pan said. “They wanted to put a name behind it,”

At the time, Booshay, Kutil and Pan were part of ACRN’s mobile DJ team, but they decided they could take things further on their own. Once Booshay and Kutil settled on the name Brick Life, things began to take off. Though Goldberg transferred to The Ohio State University, the remaining three said they felt like they had something special.

Nowadays, Brick Life is the domineering event company in Athens. Though Booshay and Kutil have graduated, Brick Life currently consists of multiple DJs, photographers, videographers and Pan, who remains the director of operations during his senior year as a journalism major at OU.

Other than Pan, former OU student Kaylen Spears stands as Brick Life’s current DJ manager. Otherwise known as DJ Marcellus Doe, Spears was one of the first outside DJs brought into Brick Life, and now he and Pan co-run the gig.

“Before Brick Life came, there was Animal Cage Productions, and before that it was like a bunch of app groups like Party EDU trying to do the same thing,” Spears said.

“The goal is to make sure people are having a great—but a great time responsibly,” Spears said. “We make sure that no shenanigans happen at our parties. We make sure we comply with the cops, but it’s to also bring the party environment back to Athens.”

Pan and Spears both touched on how the partying dynamic shifted in their four or five years in Athens. Where house parties used to be the go-to, the bar scene has taken over. And Pan said he has also seen a shift in what people want to hear from DJs.

Through his former DJ spot at The Pigskin Bar and Grille and his current Thursday night spot at Red Brick Tavern, Pan said he’s seen a growing desire for EDM music in Athens.

Pan said he has seen that shift from bargoers wanting straight hip-hop to pop, EDM and everything in between. One of the most popular songs requested today is RL Grime’s “UCLA,” which Pan said is a blend of multiple genres – including EDM.

“EDM’s not just Skrillex, where it’s just bass and nothing else. EDM is in pop music today,” Pan said. “There’s drop build-ups and drop… you can tell me you don’t like EDM but then you go and request ‘UCLA.’”

Spears said it is important for DJs to be comfortable with a wide range of music genres.

“I feel like people focus on EDM too much,” he said. “One of the big things that I did was learn to DJ every genre of music, or at least get myself familiar with it because you never know what situation you’re going to be put in.” 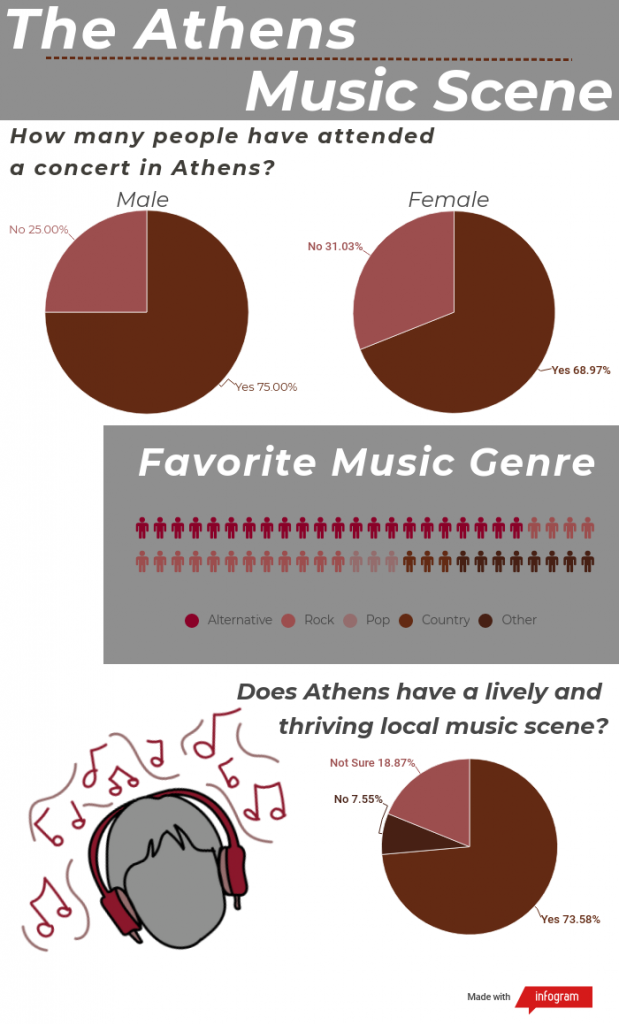 Athens is home to almost every music genre. The Union Bar and Grill is the prime venue for music in Athens, and it doesn’t disappoint. Whether it’s the Brick Life-promoted Waves series from DJ Hex or ACRN’s Battle of the Bands, The Union offers residents the opportunity to see an array of live music.

Similarly, Casa Nueva and Donkey Coffee and Espresso offer local musicians a platform to show off their talents. Donkey and Casa offer a multitude of local, regional and even national artists, as well as open-mic nights.

As Pan approaches the second semester of his senior year, the fate of Brick Life is uncertain, but the goal of creating a space and platform for local DJs is still at the forefront. Despite not specifically knowing what the future looks like for Brick Life, Pan said he is sure they don’t want to take the business away from the Athens music scene.

“At the end of the day we’re just a bunch of college kids that want to have fun at a house party or bar to support local DJs,” he said.

Editor’s Note: Molly Schramm is The Beat Editor at The Post. Though this article has been published via WOUB, it reflects classwork as Schramm is not a regular reporter or staff member for WOUB.

Swan Song: Organizing “The Party Of Your Life”