Award-Winning Documentary “FOR SAMA” to Premiere on FRONTLINE | Tuesday, November 19 at 10

One Woman’s Journey of Love, Motherhood & Survival During the Syrian War: Award-Winning Documentary “FOR SAMA” to Premiere on FRONTLINE

“Simple in concept, shattering in execution… it’s you-are -there cinema of the most literal order.” – Variety

“There simply hasn’t been a film like it before.” – The Times

In November, FRONTLINE will present the U.S. broadcast premiere of one of the year’s most critically acclaimed documentaries: For Sama, an intimate yet epic journey into one woman’s experience of the Syrian war. 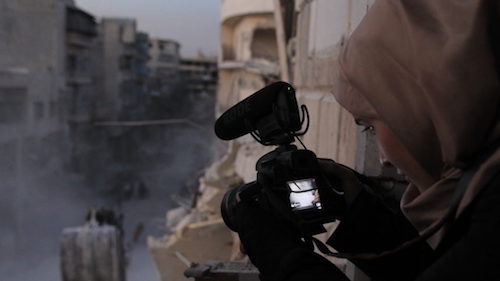 Unfolding as a love letter from filmmaker and young mother Waad al-Kateab to her daughter, For Sama tells the story of Waad’s life through five years of the uprising in rebel-held Aleppo, Syria. Waad falls in love, gets married and gives birth to her daughter Sama — all while filming the cataclysmic conflict raging around them.

“This is not just a film for me – it’s my life,” says Waad, who directed For Sama alongside her fellow director, Edward Watts (Escaping ISIS). “I was afraid I would never tell this story, and that the crimes I witnessed would be never be seen or heard.”

The documentary chronicles Sama’s first year of life: the last year of the battle for the city, and a time of almost unimaginable darkness. Hospitals are bombed, Aleppo is besieged by the Assad regime, and the remaining civilians witness attacks by chlorine gas, cluster and barrel bombs, and massacres of women and children.

Amid the horror, baby Sama gives Waad the strength to endure: fighting for her dream of a free Syria; filming, directing and producing For Sama; and offering a lens into the country’s war through her eyes.

“I found myself trying to balance so many different roles: Waad the mother, Waad the activist, Waad the citizen journalist and Waad the director. All those people both embodied and led the story. Now I feel those different aspects of my life are what gives the film its strength,” she says.

“With Waad and Edward’s poignant storytelling and remarkable access, For Sama reveals the toll of the Syrian war through the unforgettable perspective of a young mother,” FRONTLINE Executive Producer Raney Aronson-Rath says. “We are so proud to share Waad’s story with our PBS audience this fall, and extend deep gratitude to our partners at Channel 4 News, C4 and ITN Productions. ”

For Sama captures haunting stories of loss and survival, juxtaposed with moments of laughter and joy between a mother and daughter. All the while, Waad  wrestles with an impossible choice – whether or not to flee Aleppo to protect her daughter’s life, when leaving means abandoning the struggle for freedom for which she has already sacrificed so much.

The result is an unforgettable, 90-minute documentary that The Hollywood Reporter calls “a harrowing first-person account of love and war,” and Film Threat calls “one of the most important films you will ever see in your life.”

CREDITS
For Sama is produced by Channel 4 News/ITN Productions for Channel 4 and WGBH/FRONTLINE. The directors are Waad al-Kateab and Edward Watts. For Sama is filmed and produced by Waad al-Kateab. The senior producer is Dan Edge (FRONTLINE). The executive producers are Raney Aronson-Rath (FRONTLINE), Ben de Pear, Nevine Mabro & Siobhan Sinnerton (Channel 4), and George Waldrum (ITN).

ABOUT FRONTLINE
FRONTLINE, U.S. television’s longest running investigative documentary series, explores the issues of our times through powerful storytelling. FRONTLINE has won every major journalism and broadcasting award, including 91 Emmy Awards and 22 Peabody Awards.  Visit pbs.org/frontline and follow us on Twitter, Facebook, Instagram, YouTube, Tumblr and Google+ to learn more. FRONTLINE is produced by WGBH Boston and is broadcast nationwide on PBS. Funding for FRONTLINE is provided through the support of PBS viewers and by the Corporation for Public Broadcasting. Major funding for FRONTLINE is provided by The John D. and Catherine T. MacArthur Foundation and the Ford Foundation. Additional funding is provided by the Abrams Foundation, the Park Foundation, the John and Helen Glessner Family Trust and the FRONTLINE Journalism Fund with major support from Jon and Jo Ann Hagler on behalf of the Jon L. Hagler Foundation.

FRONTLINE’s Unprecedented Documentary Filmed Inside a Hospital Battling COVID-19; Tuesday, May 19 at 10 pm