ATHENS, OH – Many people misunderstand and misuse the word “ironic” when describing something that happened to them. But, WOUB Director of Radio Rusty Smith knows he’s using it the right way when he talks about the story of his 38-year career at WOUB Public Media.

“I was an Ohio University student who worked at WOUB from 1975 to 1978. I worked in television as a duty director, but I wanted to work on the radio and was never able to,” said Smith laughing. “There were a lot of students who auditioned to be on the radio, and they would only take three or four. I could never pass the audition to get on the air as a student. However, I’ve been on the radio as a professional at WOUB for the last 38 years. Ironic, huh?”

Smith, originally from Perry Hall, Maryland, was hired at WOUB in September 1981 as the FM program manager and made his permanent home in Athens.

“Initially, I graduated from Ohio University a year before my wife, so I was looking for work to stay near her to make money while she finished school,” said Smith. “I got a job at WATH/WXTQ, and then three years later got the job at WOUB as the FM coordinator, and here we are.” 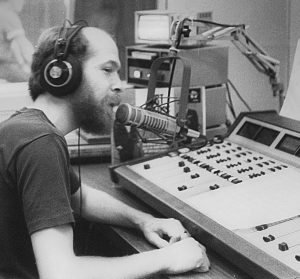 When Smith started at WOUB, the station format was Top 40 Country. Smith was a part of changing the format to what is now called Americana music, then changing it again to jazz and classical in 1987, and then finally to today’s mix of news and information and Adult Album Alternative.

“I loved the job because I was designing formats and had the freedom to do that in the beginning,” said Smith. “Each day presented another new challenge and another new learning opportunity. And that kept happening. Showdown started in 1982. Audiosyncracies started in 1986. We started Live from Jorma Kaukonen’s Fur Peace Ranch in the late 1990s, which presented a whole different challenge and opportunity. It’s fun to make things. And there’s more of that coming. We could have more streaming channels than we do with our new automation. There’s an opportunity to use our huge bluegrass library and huge jazz library to explore streaming 24/7 bluegrass and jazz channels.”

With new technology and automation, opportunities for students have changed over the years, but Smith says there are many cool things for students to get involved with and learn the business.

“We’ve created opportunities for students that go with the kinds of jobs that are out there,” said Smith. “If you go out in the world, they’re using the technology that we are using at WOUB. We still have plenty of audio production and program production for students.”

During his time at WOUB, Smith’s life has been full both personally and professionally. He and his wife, Cindy, raised their children Isaac and Alison. Isaac is now living in Philadelphia working at the public defender’s office, while Alison is in Japan teaching English as a second language. Professionally, Smith said he has seen many Ohio University students come and go, and he loves watching them start their careers and do great things.

“Former students like Brandi Parisi, she’s a big classical music announcer nationally. Kim Fox is teaching broadcasting at American University in Cairo. There are so many of them,” said Smith. “When they send me emails or stop by the station, it means a lot to me, especially if I can remember their name, and mostly I can, as long as they look like they did when they were 20 years old because I know I do.”