Skidmore started working at WOUB in 1984

ATHENS, OH – When Chief Technology Officer Steve Skidmore thinks about how long he has worked at WOUB Public Media, he finds it hard to believe.

“I’ve been working here longer than some of my co-workers have been alive,” said Skidmore. Even with that fact in mind, Skidmore says he couldn’t be more grateful.

“This place has treated me well. It’s been an honest, fair place,” said Skidmore. “I’ve had immense opportunity here because some of the people who worked here ahead of me were willing to mentor me.”

Skidmore started in July 1984. He was hired as an entry-level broadcast technician.

“I worked for both WOUB and the then-School of Telecommunication at Ohio University. I was manager of the equipment room and equipment repair,” said Skidmore.

Skidmore was only in that role for a short time when he was promoted to the next level of broadcast technician and became involved in WOUB’s work outside of Athens. 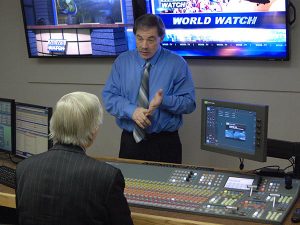 “I was a microwave technician and was assigned to work on the Higher Education Microwave Services (HEMS). It was the distance learning service WOUB provided,” said Skidmore. “I helped build studios on the Ohio University regional campuses and connected them by microwave technology.”

Not long after that, the WOUB FM expansion was approved allowing the station to add transmitters in Chillicothe, Ironton, Zanesville and Cambridge. Skidmore became the field facility supervisor.

“I was told to make it happen,” said Skidmore. “There was a period of about eight years or so that I was working out in the region, and I was never in Athens. Not a lot of people at the station even knew who I was.”

Skidmore then landed the role as Head Radio Engineer which put him back in Athens. In that job, Skidmore says he got to work on many interesting projects, but he’ll never forget the day he was asked to help connect the technology for an interview with Actor James Earl Jones.

“I was asked to make sure everything was set up correctly to record the interview,” said Skidmore. “I picked up the phone to call the number listed for the interview, expecting another engineer to answer the phone to make sure everything was working and sounded alright. But what I got was James Earl Jones himself. As you know, he has a very distinctive voice, and when he answered the phone, I was stunned that he was the one on the other end.”

While working in that role, Skidmore was able to continue to grow thanks to the mentorship of then-Assistant Director of Technology and Operations Dave Wiseman.

“He saw something in me,” said Skidmore. “Dave thought that I had raw ability that needed polishing. He mentored me and offered me advice. Dave told me once, ‘When you stop listening, I’ll stop giving advice.’ But that was something I never did.”

After moving up through a few more positions at WOUB, Skidmore was promoted to Chief Technology Officer in 2010 to replace Wiseman who was retiring. Skidmore says the two built a professional friendship that lasted after Wiseman’s retirement until Wiseman passed away in December of 2014.

“I had large shoes to fill, and I’m still learning and growing in this role,” said Skidmore. “But that’s the great thing about working at WOUB, people here were willing to invest in someone like me because they believed I had the potential to develop.”