ATHENS, OH – WTAE Pittsburgh News and Sports Anchor Andrew Stockey’s path to the anchor desk wasn’t a typical one. When he was in college at Ohio University, the 1989 Honors Tutorial College graduate never intended to be on the air. You see, Stockey’s original plan was to work in television sales and marketing. 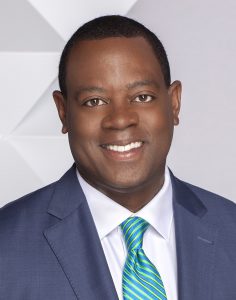 “The cable industry was really taking off at that time, so I was studying the business side of telecommunications,” said Stockey. “I volunteered at WOUB Public Media to learn more about the broadcasting industry. I loved sports, so I started working in sports at WOUB and then wound up doing news. Eventually, I started anchoring sports on the television program Newswatch. I did local news cut-ins on Morning Edition and Afternoon Edition. I also became the minority affairs director for a time and hosted a show.”

After graduation, Stockey got the job he thought he wanted. He was hired in a TV sales position in Chicago but found that he didn’t really enjoy it.

“It didn’t drive me. I wanted to make a difference and make an impact on the world,” said Stockey. “About a year after college, I started sending out resumes for news positions using my work and experience from WOUB, and I landed an associate producer job at Fox News in Washington D.C.”

Eventually he left that position for an on-air television sports job in Hartford, Connecticut.

“I grew up in Hartford, so it was great to go home,” said Stockey. He worked in Hartford for about a year and a half before moving on to Mobile, Alabama for three years and then in 1995, Stockey got the position of weekend sports anchor in Pittsburgh.

“Within six months of me starting in Pittsburgh, there were a lot of changes at the station,” said Stockey. “I became the main sports anchor, which was a role I held for 10 years, then I moved to morning news after the Pittsburgh Steelers won the Super Bowl in 2006. After that I started doing news at 5,6 and 11 for three years, and for the last eight years I have anchored the 5 p.m. news and then done sports at 6 and 11.”

Stockey is thankful that he has been able to work in both news and sports in Pittsburgh.

“On the news side, we covered the Tree of Life synagogue shootings, and we were on air for eight or nine hours. It was horrifying, but I got to see how something like that impacts a community and brings them together in a different way. In this job, you get to share something with people that impacts their lives for better or worse. That’s what I wanted to do,” said Stockey.

Stockey said he didn’t take a single journalism class while he was a student at Ohio University, but his time working with the professional staff in the WOUB Newsroom taught him much of what he needed to know about broadcast journalism.

“At that time, the WOUB Assistant News Director was Fred Kight. He taught me about responsibility, accountability, balance and brevity and how to able to make your point. WOUB taught me more than I could learn in a classroom, because it was real life experience,” said Stockey. “Fred asked us to think about the towns and communities we were serving, and that stuck with me. I work in Pittsburgh, but I know the surrounding five counties just as well. I’ve been able to tell stories in my career that make a difference. I realize the importance media can have for people who live in small communities.”

Stockey said he also learned about more than his future career at WOUB. He made important friendships that he still has today.

“WOUB is where I learned that your work and your personal life become one,” said Stockey. “I always tell young people that the best thing you can do is find your campus television and radio station and volunteer there. WOUB is unique in that it’s professional. It prepared me very well.  Once I got to the real world, I realized what I was doing in my job was not all that different from what I was doing at WOUB.”