ATHENS, Ohio (WOUB) — Regional representation in university leadership and further enrollment decline were among the topics of discussion during the Ohio University’s Board of Trustees’ meeting on Thursday.

Misty Crosby, of Marietta, was named the new regional trustee following an unanimous vote during the morning session of the meeting.

“We need to cultivate a stronger alliance with the communities in which we live,” Sherman said.

Crosby, the executive director of the Buckeye Hills Regional Council, will serve a term from Oct. 8, 2021 through June 30, 2024.

Hailing from Marietta, Crosby meets the residency requirement, which states the regional trustee must reside in the region serviced by Ohio University’s main campus or one of its regional campuses outside of Athens County. The trustee must also show leadership involvement in the community.

Board Chair Cary Cooper endorsed Crosby after the meeting.

“My fellow trustees and I believe Misty’s demonstrated professional career in regional government and non-profit administration will give our region a critical role and voice in University leadership.”

As a non-voting trustee, Crosby will serve as an advisor to the Board, representing the interests and needs of the regions served by Ohio University.

Crosby said she is looking forward to serving in the new role.

“It is an honor to be named Ohio University’s first regional trustee. I applaud President Sherman and the trustees for their commitment to include a representative who can provide a regional viewpoint and for recognizing the value this perspective will add to the university’s leadership.” 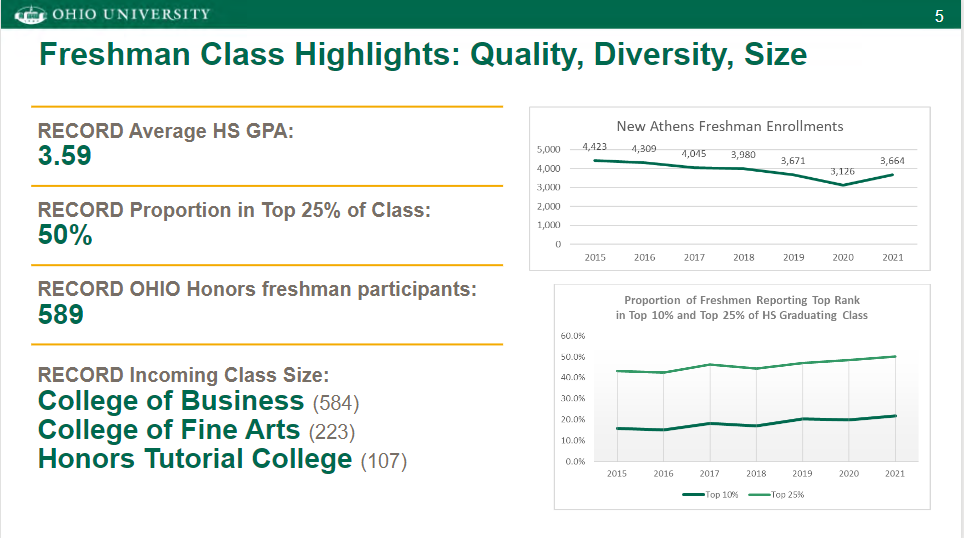 Following a steady decline in enrollment numbers since 2016, Ohio University is reporting an increase in freshman enrollment at the Athens campus. The Fall 2021 cohort has 3,664 freshman students. That is a 17% increase from 2020’s fall enrollment of 3,126 students.

Freshman enrollment in Athens may be up, but that is not the case for Ohio University’s regional campuses. Those locations declined 15.9% from 2020, totaling 4,282 students.

Total enrollment for online degree programs also declined. The 3,541 students enrolled in online programs is down 12.1% since 2020.

Overall enrollment for the University fell approximately 5.7% this year compared to 2020. Candace Boeninger, vice president of Enrollment Management said this is due to the larger historic classes that have graduated in recent years. Those classes have been replaced by smaller cohorts during the last two pandemic years.

Much More Than Covers: Midtown Men Head to Lancaster Festival