BOISE, ID — As Nathan Rourke took the final snap of his Bobcat career on the field, Brian Arp was sneaking through the crowded Bobcat bench with a Gatorade cooler.

A victory bath would be nothing new for Frank Solich, but when the senior defensive lineman turned the cooler over, it wasn’t liquid that came out.

It was french fries.

“That’s a lot better than water on you. Over the course of the years, I’ve had some water on me,” Solich said. “I will take those potatoes any time.”

The victory was the fifth bowl win in program history and a record-setting third bowl win in a row. 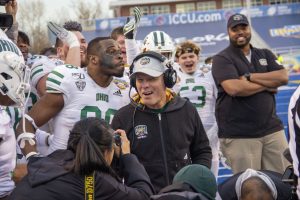 “It was an exciting, exciting game. Obviously a lot of good plays made by guys on both sides of the ball. For them, obviously for us,” Solich said. “We made it a little bit tough on ourselves.”

The Bobcats did more than make it tough on themselves late in the game, they nearly let a huge lead slip away. Heading into the fourth quarter, the ‘Cats held a 30-9 lead and had the ball at the Nevada 21 looking to put the game on ice.

However, on the third play of the quarter, an errant option pitch from Rourke was recovered by the Wolf Pack. 10 plays later, Nevada was in the end zone, but the PAT was blocked, leaving the score 30-15 Ohio.

After another Bobcat turnover on the ensuing possession when Rourke was drilled square in the chest by a blitzing Nevada defender and fumbled, the Wolf Pack needed just three plays to find the end zone again. But instead of taking the PAT, Nevada attempted, and failed, a two-point conversion and still trailed by two possessions, 30-21, with 8:42 still to play.

The Wolf Pack had scored 12 points in just 2:06 to claw back into the game.

The next Ohio possession ended in a punt and, before a stunned Bobcat team knew what hit them, the Wolf Pack was back inside the Ohio 10.

Ohio need just one play to grab back the momentum. Nevada botched a trick play on 1st and Goal from the 6 and the ball fell to the blue turf. The Bobcats’ Marcus Coleman pounced on the ball to kill the drive.

“We’re thinking short yardage situation he’s going to run the ball. They just tried to hit us with a trick play. The toss was botched, I don’t know what happened,” Ohio cornerback Jarron Hampton said. “Our D-line had been pressuring in the backfield all day.”

Nevada had another chance to cut into the lead late in the fourth, but elected to go for it on fourth down instead of taking the chip-shot field goal. Nevada quarterback Carson Strong saw his pass into the end zone fall incomplete.

“Our defense is bend, don’t break. That’s the mentality, we have fighters on our team. We’re not going to lay down for nobody. That’s what we did,” Hampton said. “We showed that today. It got rough, but we persevered.” 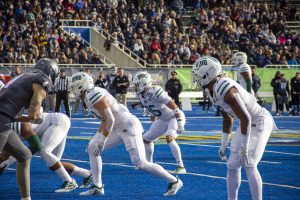 Prior to the final quarter, the Bobcats looked to be well on their way to their third consecutive blowout win in a bowl game. The ‘Cats dominated on both sides of the ball in building their three touchdown lead.

In the first three quarters, the Bobcats had outgained Nevada 391-223, forced two Wolf Pack turnovers and sacked Strong three times. Only 12 of Nevada’s 223 yards had come on the ground as the Bobcat defensive line controlled the line of scrimmage.

On the other side, the Ohio offensive line was doing their part as well. The ‘Cats rushed for 254 yards at a 6.9 yards per carry clip through the first three quarters and they had yet to end a drive without scoring points.

Three Bobcats toted the rock 10 or more times in the game. De’Montre Tuggle led the way with 97 yards and a score.

Rourke carried the ball 10 times as well, finishing with 87 yards and a 35-yard touchdown where the quarterback streaked down the right side untouched.

Julian Ross carried the ball a game-high 17 times, ending the game with 57 yards and a score. Ross also played a key role in the Bobcats’ first touchdown drive of the afternoon, converting two fourth down runs, including his 12-yard touchdown, on the drive. 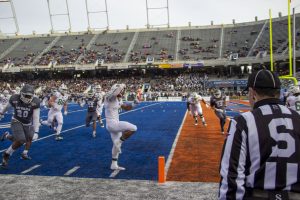 Add in another 47 yards from O’Shaan Allison and Ty Walton, and the Bobcats ran all over the Wolf Pack to the tune of 285 yards, the most yards they’ve surrendered on the ground all season.

“We’ve been really fortunate this year. We haven’t had ‘backup’ running backs, we’ve had a cycle of guys going in,” Rourke said. “We don’t really skip a beat offensively when we have De’Montre or Julian go in…O’Shaan has played extremely well when he was in.”

Rourke, to go along with his 87 rushing yards, tossed for 144 yards in his final game of playing quarterback for the Bobcats. He was poised to become the first quarterback to ever throw and run for over 100 yards in the Potato Bowl before losing yardage kneeling out the clock.

Despite missing out on the milestone, his performance was still enough to be named Most Valuable Player of the 2020 Famous Idaho Potato Bowl. 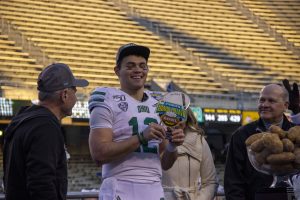 Never wanting to heap accolades on himself, Rourke answered how he felt about winning MVP by both giving his own and speaking on his team.

Conrad did have a stellar game, forcing two fumbles, both of which were recovered by Ohio.

Solich and Hampton, however, lauded the senior quarterback as he sat back, seemingly fighting back tears.

“He comes on the field, puts it all out there, works hard. He gives us everything he has,” Hampton said. “That’s why we’ve been successful in the past.”

“From the moment he stepped on campus, we knew we had somebody special. He thinks beyond himself. That’s not the way it is all the time,” Solich added. “He is definitely team oriented to the point where he’ll do anything he can to help his teammates become better athletes, better players, better people.”

In the end, the Potato Bowl could be seen as a microcosm of the 2019 Bobcats. Nothing came easy, and in the end, every player wearing green and white on the vibrant blue turf of Albertsons Stadium had a hand in lifting that glass bowl of potatoes.

“It was not easy for anybody in the program to accept what happened to us in terms of not getting it done at the level that we believed we were going to get it done at,” Solich reflected. “It would have been very easy to kind of let things slide, not come out to practice with the same kind of enthusiasm and effort as if you’re going down the stretch battling for a MAC championship.”

They didn’t let that happen. They came out every day with a lot of pride, ready to go,” Solich added, choking back tears of his own. “This team has a special place in my heart for how they responded. Are you kidding me?”

A Gatorade bath for Solich over blue turf back in 2011 kicked off the best decade in the history of Bobcats football. Maybe a fry shower kicks off another.