Every year WOUB Culture spotlights what music-centric folks in the region have been listening to all year round right in time for the holidays in our annual best-of-the-year features. 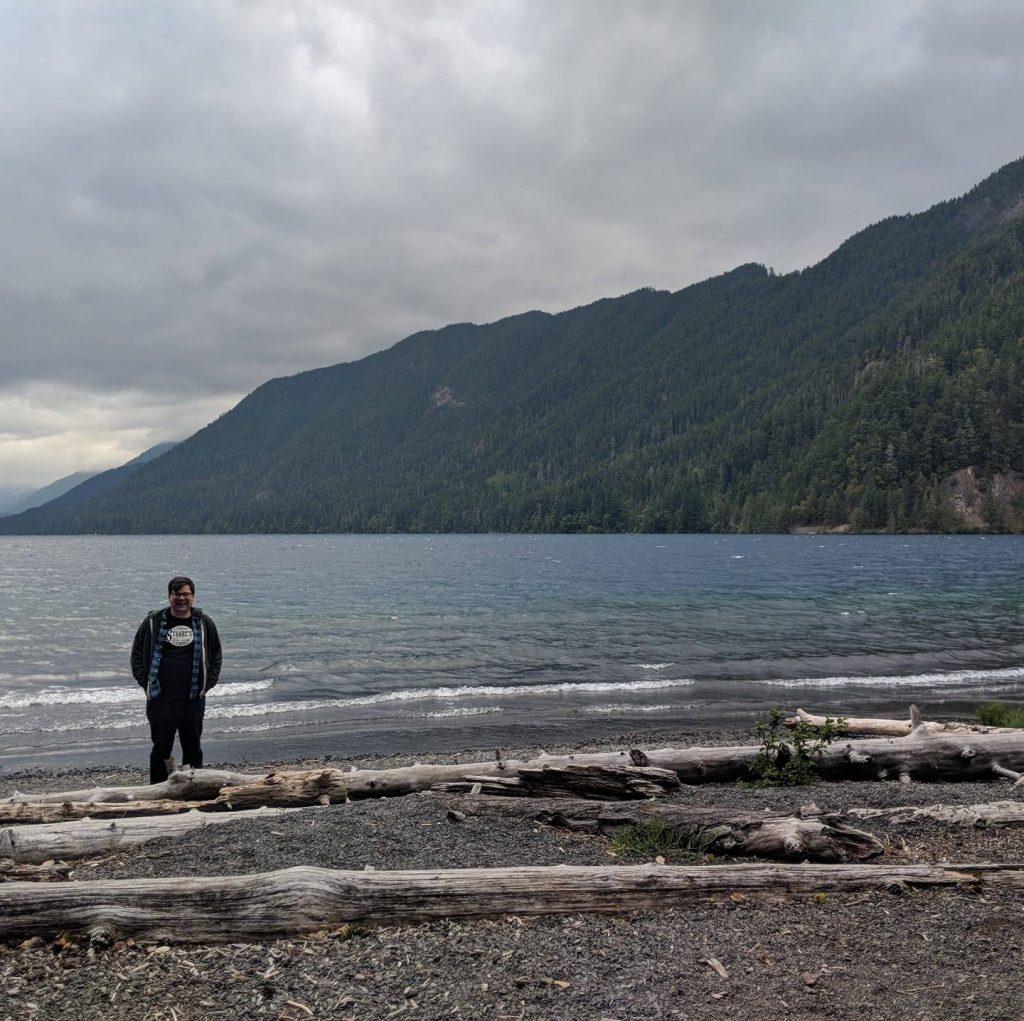 Brian Koscho lives in Athens with his wife Sherri, their cat Maggie, and dog Bosco. Brian has helped operate the Ohio music collective Aquabear Legion since 2004 (they have a new vinyl and cassette coming out in late January this year), and hosts a couple podcasts on aquabearlegion.com including one all about Ohio music called “The Western Reserve.” He plays bass and makes noise in Athens band Unmonumental, and recently became a graduate student at Ohio University after many years of being the Marketing Director at Stuart’s Opera House and the Nelsonville Music Festival.

I don’t rank these within the top albums of the year, but if I did, this one would have a chance at the top spot. LA psych rockers Wand keep pushing that genre and their own sounds in new and exciting directions. This is a great record that gets better with each listen.

This NYC duo comes fully into their own on this instant classic, mining a giant pile of what seems to be “music that Brian Koscho really likes.” Creating their own universe of influences from West Africa and the deserts of Mali, drone, psych, and even old country blues guitar riffs. Distorted microtonal guitars and banging on boxes often can’t go wrong and doesn’t here.

“Folk rock” is a pretty loaded term, and one that doesn’t quite bring about ideas of pushing envelopes and taking risks, but that is exactly what makes these two new albums from Big Thief so good. The band knows what they do best, and they continue to do that while progressing into new territories.

William Basinski – On Time Out of Time

I love Basinki’s music, but this entire genre became a huge percentage of my listening in 2019, and this new album from him was well-timed. My suggestion would be to spend an hour or so with this in your headphones and nothing else to do but listen. This played in my own headphones through many late-night graduate school sessions.

These are always fantastic collections of all things in the world of American Primitive, Guitar Soli, and experimental acoustic music, and a great way to find new things to check out too. Volume 9 was curated by Ryley Walker and happens to feature a few friends and Ohioans including Pete Fosco, Ryan Jewell’s project Mosses, and Matthew J. Rolin. Lots of good stuff.

I spent the last few years listening to a lot of hip-hop again but I was deficient in that area in 2019. One record I spent a lot of time with was Bandana, which is a modern masterpiece from Freddie Gibbs and Madlib. Great rhymes, great hooks, and beats and instrumentation that could still make this list without the first two. Great Tiny Desk concert too!

David Berman died this year at the age of 52. He was one of my absolute favorite songwriters from his work in Silver Jews, their album American Water, soundtracked large portions of my life, and is easily a top-10 all time for me. Purple Mountains was his new project after a long time away, teaming with some other musicians I enjoy a lot from Woods. This became tied with all of that mess, this album becoming the marker of the darkest time from a very dark songwriter. Highly recommended, especially as a gateway to all of his other work.

SONG: “All My Happiness Is Gone”

This album came out 2018, but I found it the first month of 2019 and listened to it A LOT, so it’s on this list. Great jangly indie rock that also has a high degree of musicality. I love Pavement, so this isn’t meant to be a knock on them at all, but Bonny Doon remind me of a more serious Pavement, a little tighter around the edges but just as playful.

I’ve been a fan of Brian’s music for a long time, the work he makes is always interesting and dense, and always suprising. He uses electronics, Fender Rhodes, and more along with found audio and music to create something entirely new and still of the world it came from. Even better when the topics are Appalachian history and the town of Shawnee.

My friend and former Athenian Scott Hedrick (of Metal overlords Skeletonwitch) joins up with the Dutch noisy/free jazz/awesome sax and drums duo Dead Neanderthals to shred all over some spacy goodness. As Andrew Lampela says in his great 2019 list for Off Shelf, “I’m a big fan of free jazz, weird music, and watching my friends do cool shit. Ghosts has all three”.

Supernobody – You Can’t Go Back

One of the greatest rock and roll bands resides right here in Athens, Ohio and we should all be more thankful of that fact. Supernobody is a collection of some of the best musicians we got down here and is led by my own personal spiritual advisor Miles Down (despite our recent disagreements). Their first vinyl release is the most recent of what has become a downright prolific output by Elliott and the band and continues their streak of great albums.

The first of a handful of Ohio releases that are on my year end list, this is essential listening for any fans of Jack Rose, John Fahey, or Daniel Bachman. Rolin comes to Columbus via Chicago/via Cleveland and his solo 12-string guitar debut is one of the best forays into that world that I have heard in a bit. I love this one more with each listen.

This Columbus group could probably get by on having the best band name ever on its own, but their songs are absolutely fantastic too. This cassette features a whole lot of great Midwest rock and roll that seems like a lot of influences from our neck of the woods blended together and spat back out. Song titles are as good as the bands name and their music too.

SONG: “USA Will Start Another War”

Great record from an NMF alumni from 2019, Crushing is perfect for headphones and a late night too. Jacklin’s voice and songwriting move along with the music perfectly, creating something that can seem devastating and hopeful all at once. There is a lot of vibes on this album, which seems like a cop out in describing (and it could be, hahaha) but you will see.

One of the best rock and roll albums of the year was this cassette only release from Columbus, Ohio’s Van Dale. Rock music can be interesting still, and a three-piece band can still deliver some serious sonic volume. “Numbskull” is featured on the new Aquabear Legion Volume 7 vinyl compilation due out in late January 2020.

Last minute addition and something I not only had completely missed but had never heard of at all. The advantage of being a music geek is that a lot of your close, long-time friends are too, so suggestions come all the time from far and wide. When it comes from Brian Wiebe it gets an immediate listen, and I loved this Toronto duo’s EP.

Bonnie ‘Prince’ Billy – I Made a Place

Will Oldham is a favorite of mine, as our both Joan Shelley and Nathan Salsburg. So Oldham releasing an album of new material with the Louisville pair as his backing band makes for a spectacular collection of songs. He’s played two of my favorite shows ever at Stuart’s Opera House and I am very excited he is returning (with Jonathan Richman too) on March 6 in Nelsonville.

Lousiville’s Joan Shelley is magical, her voice and guitar playing carrying beautiful folk songs that have the ability to completely take the listener along with her. At risk of sounding cliché, her songs are entrancing. And her newest effort is no different. Beautiful songs, beautiful music, and one of my favorite voices combine together for something special. Nathan Salsburg playing guitar only always makes something even better too.

SONG: “Coming Down For You”

Emily Sprague’s previous albums as Florist featured a whole band, but with the aptly titled Emily Alone, her newest group of songs get a focus from just her this time. The sparseness brings out a beauty that was harder to grasp before, and this collection showcases that beauty throughout. Reminds me of everything from Mirah to Bill Callahan to Karen Dalton to Michael Hurley all in one album, making me go back through the rest of the catalogue too.
SONG: “Moon Begins”

I listen to everything William Tyler puts out, and Goes West continues a solid streak of things that I have loved. Continuing the full band and sometimes-electric elements of 2016’s Modern Country, Tyler’s masterful guitar work continues moving things into a cosmic Fahey direction.

SONG: “Our Lady of the Desert”